The Persecution of Julian Assange 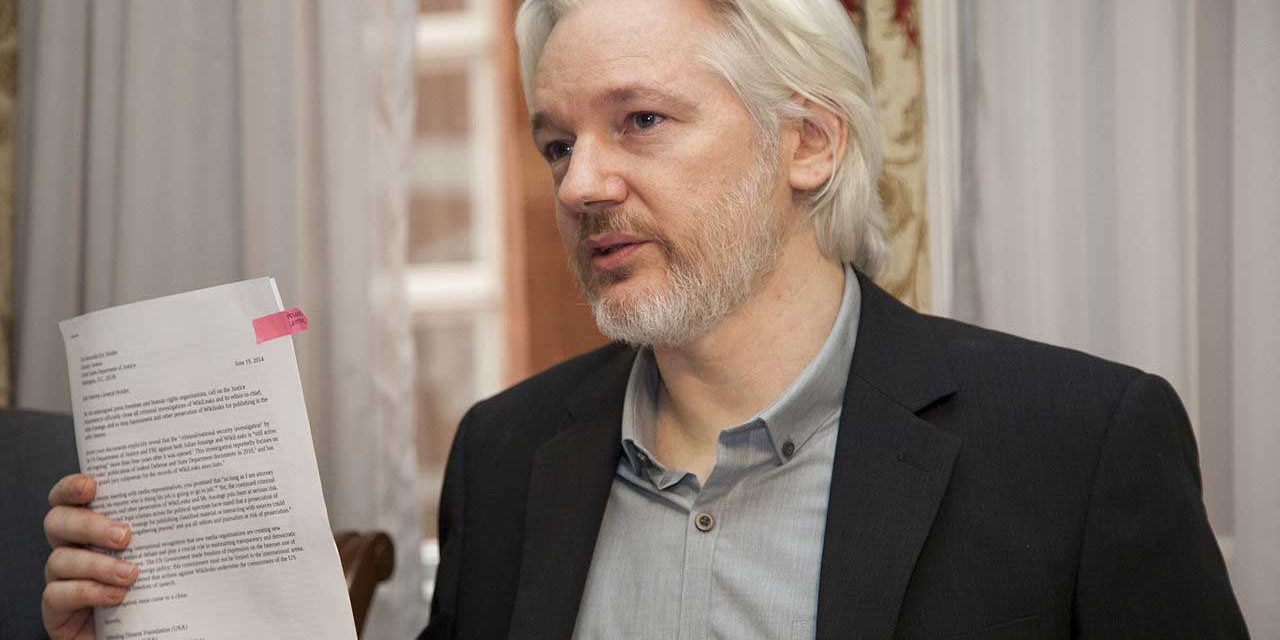 Julian Assange has been persecuted by Washington for seven years now for exposing US war crimes through his WikiLeaks organization.

“We need a political intervention to make this situation end. He (Assange) is the only political prisoner in Western Europe.” — Juan Braco

The persecution of Julian Assange, the founder of Wikileaks, is now seven years old. Ecuador has protected Assange for the past half decade from being turned over to Washington by the corrupt Swedish and British for torture and prosecution as a spy by giving Assange political asylum inside the Ecuadorian Embassy in London.

Ecuador has now given citizenship to Assange and attempted to provide his safe transit out of England by giving him diplomatic status, but the British government continued in its assigned role of jailer by rejecting Ecuador’s request for diplomatic status for Assange, just as the most servile of Washington’s puppet states rejected the order by the UN Committee on Arbitrary Detention to immediate release Assange from his arbitrary detention.

Assange got into trouble with Washington because his news organization, Wikileaks, published files released by Bradley Manning. The files were a tremendous embarrassment to Washington because they showed how Washington conspires against governments and betrays its allies, and the files contained an audio/video film of US military forces murdering innocent people walking down a street and then murdering a father and his two young children who stopped to give aid to the civilians the American soldiers had shot. The film revealed the heartlessness and criminal cruelty of the US troops, who were enjoying playing a real live video game with real people as their victims.

It was Manning who suffered, not the troops who committed murder. Manning was held for two years in conditions that experts said constituted torture while a case was framed against him. Some believe the harsh conditions affected his mind. Manning was convicted by a kangaroo court and sentenced to 35 years in prison, but Obama in an act of humanity unusual for Washington pardoned Manning.

Washington wanted Assange as well, and the chance came when two Swedish women who, attracted to Assange by his celebrity status, seduced him. The two women had not secured the cooperation they wanted from Assange in the use of condoms and, brainwashed by HIV fears, wanted Assange to join them in being tested.

Assange, misreading the extent of their fears, was too slow to comply, and the women went to the police to see if he could be required to be tested. According to the women, the police made up the charge of rape. The women themselves disavow the charge.

The charges were investigated, and the chief Swedish prosecutor Eva Finne dismissed the charges, saying “there is no suspicion of any crime whatsoever.”

Mysteriously, the case was reopened by another prosecutor, Marianne Ny, who many suspect was operating at the behest of Washington. On November 30, two days after Assange began publishing the Cablegate materials leaked by Bradley Manning, Ny issued an Interpol “red alert” arrest warrant for Assange. This was an unusual request as no charges were outstanding against Assange, and hitherto extradition from one country to another on an arrest warrant required actual charges, whereas Ny said she wanted Assange for questioning. Most everyone in the know understood that Washington had ordered Sweden to get its hands on Assange and to turn him over to Washington.

Assange challenged the legality of the arrest warrant in British courts, but the British court, many believe following Washington’s orders, ruled against the law and in favor of Washington. Assange assented to the arrest and presented himself to a British police station. He was placed in solitary confinement at Wandsworth prison. If memory serves, the daughter of Sir James Goldsmith paid his bond and he was placed under house arrest. When it became clear that the Swedish prosecutor wanted Assange for Washington, not for any charges against him in Sweden, Ecuador give him asylum, and he fled to the embassy in London.

Where he has been ever since.

Sweden has closed the case a second time, and Assange is no longer wanted for questioning in Sweden. Therefore, there is no longer any reason for the British to hold him for Sweden. But the British government never were holding Assange for Sweden. The British were holding him for Washington. And they still are. Even though Sweden has closed a case based on a false report by police and has no basis for any charges against Assange, the British government says it will grab him the minute he steps outside the embassy.

The British are so desperate to serve their Washington master that once they even declared that they were going to violate diplomatic immunity and invade the Ecuadorian Embassy and seize Assange.

The British excuse for a once proud government’s continuing servitude to Washington as Assange’s jailer is that by taking asylum in the embassy Assange jumped bail and therefore the British have to arrest him for not surrendering a second time to the police for an investigation that has been closed.

Stefania Maurizi, an Italian investigative journalist for La Repubblica, smelling the stench of fraud that covers the entire case, has been trying for two years to get her hands on the correspondence between the UK, US, and Swedish governments pertaining to the case in order to pull back the shroud of the Washington-orchestrated propaganda that colors the case. A British tribunal refused to release any documents on the grounds that it had to protect the British Prosecution Service’s relationship with foreign authorities.

That tells you all you need to know. Julian Assange has lost seven years of his life because stinking dirty Washington wanted revenge on Assange for exercising the US Constitution-protected right of a free press, and the stinking dirty governments of Sweden and Britain did Washington’s dirty work. What we know for certain is that Assange is totally innocent and that there is no honor and no integrity in the US, Swedish, and British governments. Law means nothing to the scum that misrule these countries.

In the US and probably throughout Europe, politicians and feminists, with the exception of Katrin Axelsson and Lisa Longstaff, used the presstitute media to paint Assange as a rapist and as a spy. The feminists cared nothing about any truth; they just wanted a man to demonize. Truth was the last thing on politicians’ minds. They just wanted to divert attention from Washington’s crimes and betrayals of allies by portraying Assange as a threat and traitor to America. They were unconcerned that Assange could not be a traitor to America as he is not an American citizen.

In actual fact, there is no basis in law for any US claim against Assange. Yet because of Washington and its servile British puppet state, Assange remains interred in the Embassy of Ecuador in London. Clearly, honor and respect for law reside in Ecuador, not in the US, UK, or Sweden.

But facts, along with law and civil liberty, have ceased to mean anything in the Western world. The corrupt US Attorney General Jeff Sessions said that the arrest of Assange is a “priority.” The British police, mere lackeys of Washington, said that they would still arrest Assange, despite the case being dropped, if he left the embassy.

For the British, serving Washington is a higher calling than the honor of their country.

This article was originally published at PaulCraigRoberts.org on January 12, 2018.