The US Has Devolved into a Police State 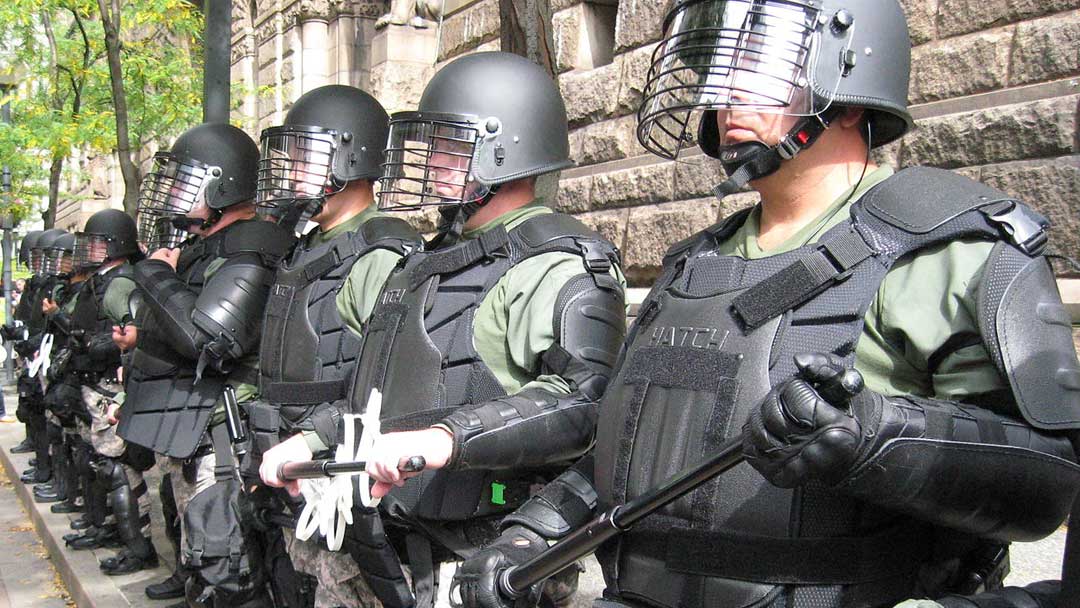 The police are the enforcers of the thievery practiced by the One Percent. The main function of the police in America is to suppress the citizens.

The school teacher is surprised to be interrupted in her conversation with a school board member by a policeman. She attempts to continue the conversation and is ordered to leave the room by the black cop. She complies with the black cop’s illegal order. As she leaves the room, the black cop knocks her down, handcuffs her, calls backup, and sends her to jail.

This is an accurate picture of America today. The woman did nothing, broke no law, no school board rule, no meeting rule, complied with the black cop, and was still brutalized and arrested. The black cop, as he brutalized her, kept saying “stop resisting.” It is perfectly clear from the video that there is no resistance, only assault by the black cop in what is clearly a criminal action against a member of the public by the police.

Will the black cop get away with it? Of course.

What was it all about?

The meeting was about the school board’s approval of a raise in salary for a school board member equal to the annual pay of school teachers, while the teachers themselves received not one cent.

The white female teacher assaulted by the black cop wanted to know why resources needed in the classroom, where class size had increased by about one third, were instead going to school board members who really did not do anything except collect high salaries.

This is a fair and honest question, but it was one the school board did not want to hear. So the school board had the Uncle Tom black cop brutalize and arrest the white female school teacher.

As I said, this is America today.

The same thing is going on everywhere.

Consider, for example, America’s colleges and universities. According to a number of reports, 75 percent of budgets go to administration. When I attended Georgia Tech there was a president and a dean of students. Today universities have enormous administrative staffs. They have presidents, chancellors, vice chancellors, provosts, vice provosts, assistant vice provosts, deans, associate deans, and assistant deans for affirmative action, politically correct speech and demeanor, women’s rights, minority rights, homosexuals’ rights, and transgender rights. America’s universities are overrun with administrators. Education hardly exists.

Full time faculties are shrinking. In place of established professors students are taught by adjuncts who are paid a few thousand dollars to teach a course.

There are many things to be learned from this school board meeting atrocity. First, it is not just white cops who assault black people. Cops, whether black or white or rainbow in color assault the general public, white, black, brown, the young, the elderly, cripples in wheel chairs, the family dog. The cops, irrespective of race brutalize the public. There is no race safety. The police are a brutal force whose only function is to suppress all dissent against the bosses. All lives matter, not just black lives. The police actually kill more white people than they kill black people.

The police are the enforcers of the thievery practiced by the One Percent. The main function of the police in America is to suppress the citizens. That is what the black Uncle Tom cop is doing at the school board meeting.

One of America’s greatest disadvantages is “law and order conservatives.” These peoples’ paranoid fears of crime have enabled the creation of the American Police State. Moreover, these people are completely illogical. The police seldom, if ever, prevent a criminal act. The function of the police is to investigate the act and to pin it on someone, innocent or guilty. If an American is so scared by crime, he/she can use the carry laws to arm themselves.

The facts are established that each year 2 million criminal acts are prevented by the fact of armed Americans. The Second Amendment is the most powerful preventer of crimes in the United States. Essentially, the police prevent no crimes; rather the police commit crimes against the public, such as against the school teacher, whereas the Second Amendment protects each year 2 million citizens.

What America needs is not the corrupt police force that it has, but the Second Amendment.

Once Americans give up their right of self-defense, they are toast. My advice to every American citizen is: when you see the Second Amendment going down, get out of the country as fast as you can.

This article was originally published at PaulCraigRoberts.org on January 10, 2018.