The Flawed and Corrupted Genius of American Republicanism 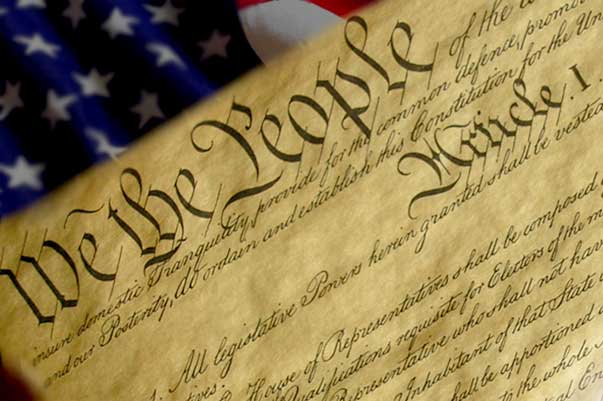 US Constitution (US Air Force/Public Domain)

The gap between republicans and Republicans has never been greater than it is now under the Trump presidency.

Trump as President makes us think as never before about viability of the American version of constitutional democracy, that is, the ‘republic’ that Ben Franklin promised the people at the time of Constitutional Convention in Philadelphia.

We often forget that Franklin replied to the question by adding several words: “if you’ll keep it.”

With the election of Trump in 2016 these prophetic cautionary words have come home to haunt the country with a cruel vengeance.

Of course, arguably nuclear America had long abandoned the pretense of consensual government, and warmongering American had driven the point home with only a whimper of dissent from Congress, mainstream media, and the citizenry. Imagine, currently engaged in bombing six countries and combat operations in many more, and the loudest sound from the citizenry or media is an all-encompassing silence.

And then we must not forget about the potent ‘deep state’ that took shape during World War II, maturing and consolidating its hold on elected officials during the long Cold War. Or, I suppose, its more visible presence that Eisenhower warned about in his Farewell Address—the military-industrial complex (as abetted by a corporatized media and a wide array of cheerleading think tanks).

Yet Trump poses the challenge more bluntly—so crudely that many of us feel we can no longer sit back and hope for the best. So far even the deep state has lost some of its aura of invincibility to the Trump onslaught, although it is fighting back, stacking the White House upper echelons with national security state first responders (McMaster, Mattis, Kelly), and may yet have the last word.

The distinctive essence of American republicanism is a distrust of reason on an individual basis combined with a confidence in reason on the level of collective national action. That is the idea of checks and balances, separation of powers, the friction between equal branches of government, the rule of law, and the electoral powers of the citizenry are acknowledgements that the containment and disciplining of individual power and authority are more important than the efficiency of governance.

But maybe confusing the efficiency of capital as embodied in the ideology of neoliberal globalization, ideas of restraint in the Executive Branch have gradually been pushed aside as the urgencies of militarism and geopolitics, as well as the preemptive imperatives of security, have taken precedence given the time/space features of modern warfare, both in the form of non-state terrorism or in relation to weaponry of mass destruction.

In other words, the country has been stripped of any basis for confidence in the rationality of the system to check the irrationalities of the individual.

This is where Trump entered the scene, somewhat unintentionally delivering a message: the end of republicanism is at hand, despite the Republicans having the upper hand in all three branches of government. The gap between republicans and Republicans has never been greater.

The system is now so flawed that even should the Democrats manage to claw their way back to power the gap would not greatly diminish. The system of republican governance will soon collapse unless the nourishing winds of revolutionary renewal soon arrive.

We should not put all the blame, or alternatively, give all the credit to Trump. An insufficient number of American people failed to identify a threat to the virtues of republican government. Neither political party was oriented toward restoring republicanism under 21st century conditions, which would necessitate at a minimum: getting rid of nuclear weapons, insisting on Congressional participation in relation to acts of war, safeguarding the national interest by rejecting ‘special relationships’ with Saudi Arabia and Israel, conforming gun control to the true and sensible meaning of the Second Amendment, heeding the call of Black Lives Matter, leading the struggle against global warming, strengthening the UN and respect for international law, relying on ideas of common security, human security, protection of the poor, restorative diplomacy to address threats and disempower adversaries rather than coercive and militarized diplomacy, pursuing global justice by taking the suffering of others seriously, and dealing humanely with the crises of global migration and prolonged refugee status.

In the meantime, Trump and Trumpism tell us more vividly than we could possibly have imagined about the collapse of 18th century republicanism, and the inability of the system to evolve to meet fundamental changes associated with a globalizing reality that shrinks time and space while stimulating a reactionary politics of ultra-nationalism, territoriality, and ‘gated national communities.’

We need to ask: what are system requirements for 21st rationality in the designing of governance structures at all levels of human endeavor?

In my view, an ethics of human solidarity and empathy has never been more closely correlated with a politics of human survival, which itself is tied to the urgency of ecological sensitivity to our natural surroundings, including a dangerously deferred implementation of animal rights.

When the American Constitution was formulated, the guidance of reason was an inspired means to construct a durable government that balanced contradictory goals (admittedly incorporating a gross type of moral blindness in the form of slavery and the rights of native Americans). But now the path to a humane and sustainable future must be built on ethical and ecological foundations in which values are given priority over reason and rationality.

The odiousness of Trump’s presidency gives the people of America what might be their last chance to achieve political redemption for themselves, and for others now and in the future who will be drawn into the circle of extreme victimization unless this dynamic of renewal suddenly takes hold.