Patriotism Is a Two-Edged Sword 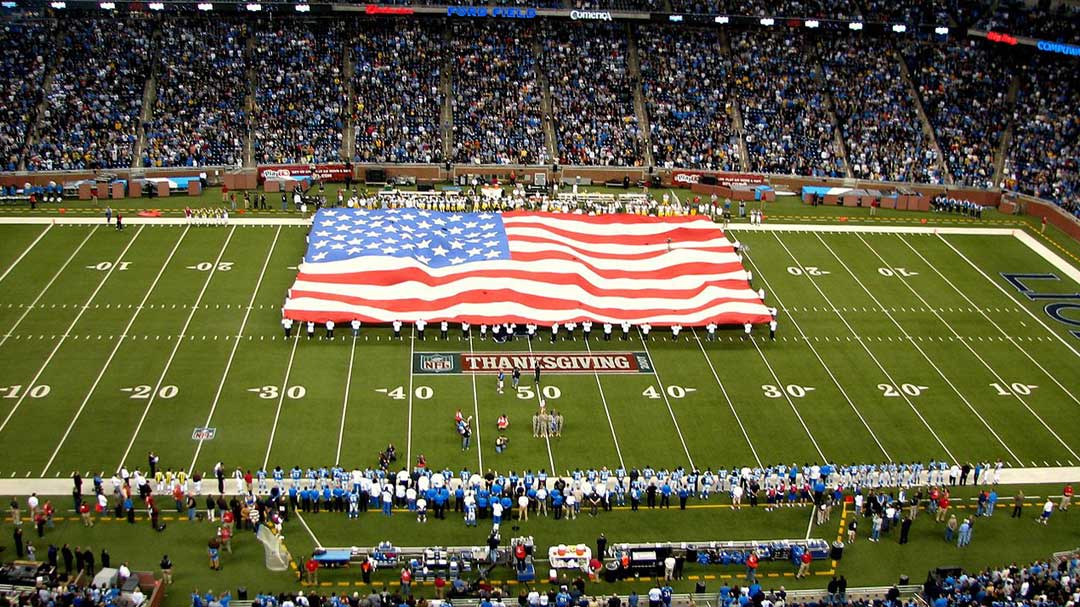 People stand for the national anthem during an NFL game (Dave Hogg/CC BY 2.0)

Critics of NFL players' decision not to participate in a ritual of the state religion are attacking a right guaranteed under the US Constitution.

I sometimes wonder if America’s greatest threat is the population’s hyper-patriotism. The bulk of the population is now at work shutting down the NFL players’ First Amendment rights, and none of the incensed censors are capable of understanding that it is they, and not the NFL players, who are attacking the U.S. Constitution. We have been through all this flag business before, and federal courts have ruled for the protesters who burnt flags, wore them on their clothes, whatever. Yet, here we go again.

Hardwick Clothes CEO pulls the company’s advertising from NFL games. Insofar as advertising helps Hardwick’s shareholders, CEO Allan Jones is hurting his own shareholders in order to protest the NFL players’ protests, a thought that probably never occurred to him.

According to this report, white people across the country are burning their NFL shirts and their expensive tickets for which they paid hundreds of dollars.

A Louisiana state representative has introduced legislation to ban state subsidies for the New Orleans Saints because of their “disgraceful protests.” It is OK with Rep. Kenny Havard for Louisiana taxpayers to give hundreds of millions of dollars in subsidies to the NFL team as long as the players stand for the anthem, but not if they don’t. It apparently never occurred to Havard to question whether relatively poor Louisiana taxpayers should be giving hundreds of millions of dollars to a billionaire team owner. There is no doubt that the average salary of the Saints exceeds the average salary of Louisiana taxpayers.

Former NFL quarterback John Elway declares: “I believe that this is the greatest country in the world,” and his personal belief takes care of the numerous protesters who clearly have a different view.

Bill O’Reilly makes a guest appearance on Fox News berating the NFL protesters for ignoring the effect on US soldiers in Afghanistan who “are putting their life on the line.” Apparently, after all these years it still has not occurred to O’Reilly that the soldiers’ lives — and those of Afghans — are being put on the line by the military/security complex’s drive for profits and the neoconservative drive for US and Israeli hegemony.

Trump sends out emails: “Do you stand with President Trump, our flag, and this great country” against the NFL protesters?

The childishness of it all is an American embarrassment.

The patriotic response is not only an attack on the First Amendment but also plays into the hands of Identity Politics, which has its own take on the matter. Julio Rosas writes in the HuffPost that standing for the national anthem is standing for white supremacy.

Before a few dimwits send me emails demanding explanation why I stand for anti-American minorities against “the greatest country in the world,” let us all first consider where this is going. The answer is: nowhere good. The hyper-patriotism that is being whipped up is so irrational that it is against the self-interests of the counter-protesters, who are hurting the visibility of their merchandising brand and costing the shareholders profits, burning their clothing and expensive football tickets, and denying themselves their favorite entertainment.

The military/security complex, the hegemonic neoconservatives, and the Israel Lobby are sitting there, licking their chops. They know what to do with this display of ignorant patriotism. They will turn it against Iran, North Korea, China, and Russia. Their profits will flow even higher, neocon ambitions will be realized, and Israel will have the US eliminate another country — Iran — in the way of its expansion. Or so they think.

Russia cannot afford a vassal of Washington in Iran or the type of chaos in Iran that now engulfs Iraq and Libya. It is a short distance from Iran through Azerbaijan or Turkmenistan into Muslim areas of Russia and former Muslim provinces of the Soviet Union. If Iran falls, Russia is the next to be destabilized. Additionally, Iran in Washington’s hands extends to the East Washington’s surrounding of Russia. The Russian government would be confronted with US missile bases on its borders ranging from the Baltics through eastern and southern Europe, Ukraine, Georgia and Iran. Moreover, US missiles in Iran could reach China in a few minutes as can the US missile bases being constructed on China’s Pacific border under the guise of countering “the North Korean threat.”

China depends on Iran for 20 percent of its oil supply. China was forced out of its Libyan oil supply by Washington’s overthrow of Gaddafi. Losing Iran would be a blow. At some point these two powerful countries will have to realize that their national existence is at stake. China has been too busy making money to pay attention, and Russia has been in thrall to its centuries-old desire to be part of the West.

The Russian government’s policy of replying to Washington’s aggression with diplomacy has failed totally. This policy has been extremely expensive to Russia and today is a direct threat to Russia’s national survival. Whether Russia is too controlled by Washington and Israeli-installed billionaires to attend to its national interests remains to be seen.

China’s lust for riches is a non-substitute for national survival.

Washington is counting on these singular weaknesses of the only two countries capable of serving as a check on Washington’s unilateralism.

However, there are countervailing powers in Russia and China. The Operation Command of the Russian High Command has publicly given its opinion that Washington is preparing a surprise nuclear attack on Russia. It would be derelict beyond comprehension for President Putin to ignore this conclusion. Inside China, historic pride is a rival influence to the lust for riches. The Chinese are determined never again to be a mere playground for foreign powers.

Sooner or later even the hubris-overstuffed Zionist Lobby will realize that the American war against Iran that Israel is demanding is a fuse for a Third World War and that the Jews will be destroyed along with everyone else. From the “Nile to the Euphrates” will be a wasteland.

In my previous column, I addressed what can be done from the Western side to reduce the tensions that are leading to nuclear armageddon. On the Russian and Chinese side what can be done is a tri-party mutual defense pact between Russia, Iran, and China that is made public. This would tell the psychopaths in Washington and Israel that an attack on Iran means World War III.

If this is not a deterrent, then Washington and Israel are lost to evil, and life on earth is ended.

This article was originally published at PaulCraigRoberts.org on September 28, 2017.