Take a Knee for Freedom of Religion 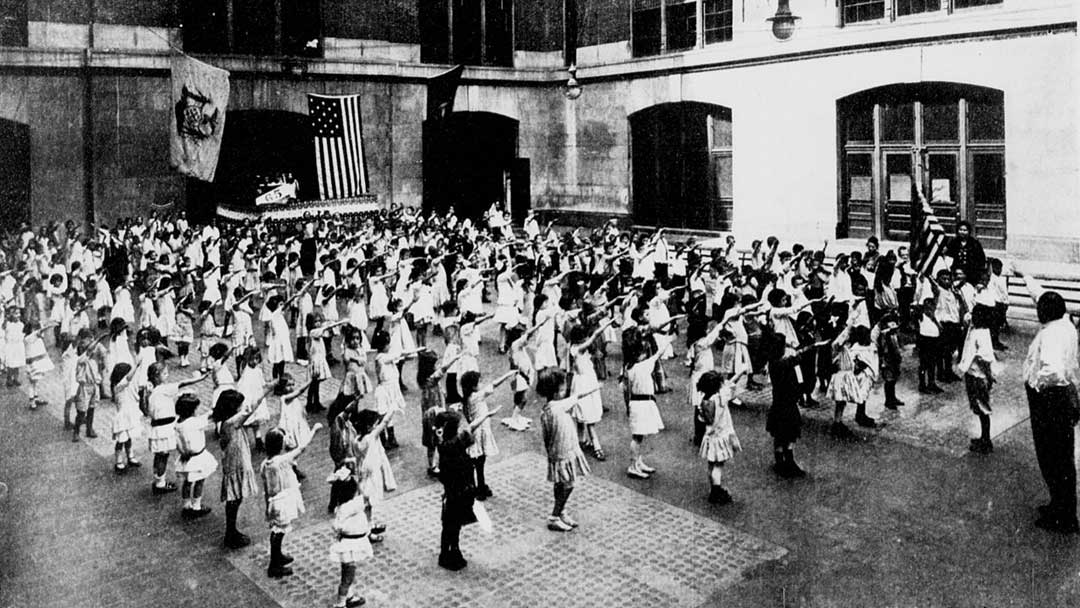 Students being indoctrinated into the state religion give the "Bellamy salute" toward the US flag while reciting the "Pledge of Allegiance", written by Francis Bellamy. (New York Tribune/Public Domain)

Freedom of religion depends on the willingness to stand up for (or take a knee for) the right not to be compelled to worship.

What is freedom of religion? It is not actually or directly freedom to think or not think religious stuff, not to the extent that one can, or chooses to, keep one’s thoughts secret. Rather, it is the right to display or to refuse to display religiosity.

In Saudi Arabia, if you do not act as if you hold certain objects and words and behaviors sacred, your life is in jeopardy.

In the United States, what puts you at the greatest risk of unpleasant repercussions is not the practicing of any particular religion, with the possible exception of Islam or anything that people might mistake for Islam. What the most factors conspire to compel you to in the United States is this: flag worship.

What makes it a religious ceremony? The fact that those who refrain from participating are excommunicated. Colin Kaepernick can’t get a job, and the President of the United States wants anyone who refrains as Kaepernick has to be fired for “disrespecting our flag.”

The U.S. flag appears on Catholic altars in some states, as well as in other churches and sacred arenas. For some, the Confederate flag and statues of Confederate generals are equally sacred. But virtually nobody treats local or state or UN flags as sacred. It is exclusively the flag that accompanies a military that must be worshiped — a military that pays the National Football League millions of public dollars to perform pro-military ceremonies.

Of course, Kaepernick and others are protesting a racist judicial system. At least some of those players taking a knee will certainly tell you they love the flag (and the troops, and the wars). But those protesters’ willingness to protest racism by challenging flag worship is a step against racism and also a step for freedom of speech. Only it isn’t just freedom of speech. It’s also that other freedom that comes first in the First Amendment, just before the freedom of speech.

Freedom of religion depends on the willingness to stand up for (or take a knee for) the right not to be compelled to worship.

Here in Charlottesville this past weekend, Stevie Wonder and Dave Matthews and others got down on one knee for unity, and then two knees — as they said — for prayer. I groaned. As an anti-racist atheist, I saw a symbol I liked transformed into one I find depressingly backward. But, on second thought, I think this action had a point. These musicians were turning opposition to one religion into support for another. By adding a second knee, they were stepping from defiance of a nearly universal religion in the United States which the U.S. government does a great deal to establish, to support for a widespread set of religions that have managed a great deal of mutual tolerance.

But Stevie and Dave never demanded or even asked the concert crowd to take a knee, or two — and never threatened repercussions against those who refrained. They were exercising perfect freedom of religion. Not everyone who ever comes near a microphone or a Twitter account does so.