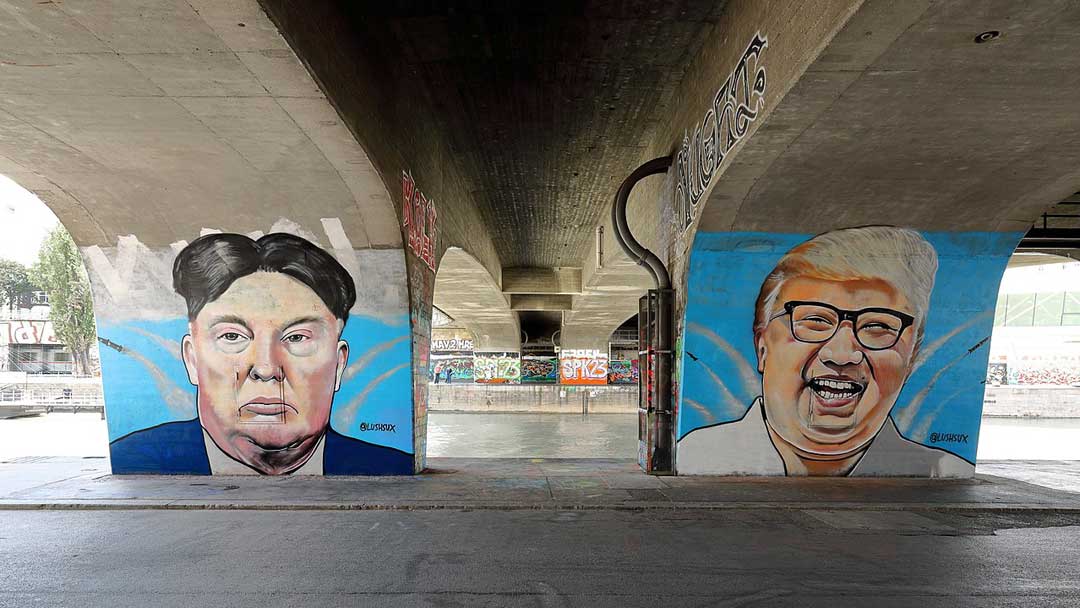 (Photograph by Bwag, licenced under CC-BY-SA-4.0)

Trump's delusional speech aside, creating chaos and destroying the lives of tens of millions of people is what Washington does.

I listened to part of Trump’s UN speech this morning. I was so embarrassed for him and for my country that I had to turn it off.

I wonder if whoever wrote the deplorable speech intended to embarrass Trump and inadvertently embarrassed America as well, or whether the speechwriter(s) is so imbued with the neoconservative arrogance and hubris of our time that the speechwriter was simply blind to the extraordinary contradictions that stood out like sore thumbs all through the speech.

I am not going to describe all of them, just a couple of examples.

Trump went on at great length about how America respects the sovereignty of every country and the people’s will of every country, and how the US, despite its overwhelming military power, never tries to impose its will on any country. What was the administration thinking, or can it think?

What about Yugoslavia/Serbia, Afghanistan, Iraq, Libya, Somalia, Egypt, Syria, Yemen, Pakistan, Crimea, Ukraine, Venezuela, Honduras, Ecuador, Bolivia, Brazil, Argentina, just to mention countries in the 21st century that have been subjected to US military attacks, government overthrows, and removals of political leaders who did not conform to US interests?

Is it respect for other countries to inform them that unless they do as they are told, “we will bomb you into the stone age”?

I heard Trump complain that the UN Human Rights Commission had as members countries with the worst human rights records of our time, and I wondered if he was talking about the United States.

Clearly, Trump, the speechwriter(s), the State Department, the National Security Council, the US Ambassador to the UN, indeed the entire administration, do not think that the endless slaughter, maiming, orphaning, widowing, and dispossessing of millions of peoples in many countries, producing waves of refugees, comprise human rights violations.

The arrogance conveyed by Trump’s speech is unprecedented.

After assurances that America respects everyone, Trump then made demand after demand and threat after threat against the sovereignty of Iran and North Korea, demanding that the rest of the world back him up.

Neither country is a threat to the US. Unlike the US and Israel, Korea has not been at war since 1953. Iran’s last war was in the 1980s when Iran was attacked by Iraq. Yet both North Korea and Iran are subjected to constant threats from the US. At the UN, Trump threatened North Korea with destruction, and Washington is telling more lies about Iran in order to justify military action.

Here is what former Secretary of State Colin Powell says about how carefully Washington thinks about other peoples:

That’s what Washington does. It brings chaos to tens of millions of peoples, destroying their lives and the prospects of their countries. This is the behavior that Trump described as American compassion for others. This is what Trump says is respecting others and the sovereignty of their countries. Washington dresses up its crimes against humanity as a “war on terror.” The tens of millions of slaughtered, maimed, and displaced persons are merely “collateral damage.”

One wonders if the rest of the world, especially Russia and China, got Washington’s message. Washington’s plan for UN “reform” is a plan to turn the organization into another instrument of US foreign policy, like NATO and the EU. The message that Trump was sent to deliver to the UN is that henceforth the UN is expected to support Washington’s foreign policy agenda. Opponents to Washington’s war policy are to be isolated and lumped together with the bad countries as defined by Washington.

In other words Washington accepts no limits on its unilateralism. This means war for every country that does not accept Washington’s hegemony.

This article was originally published at PaulCraigRoberts.org on September 19, 2017.