Apartheid and the Future of Israel/Palestine 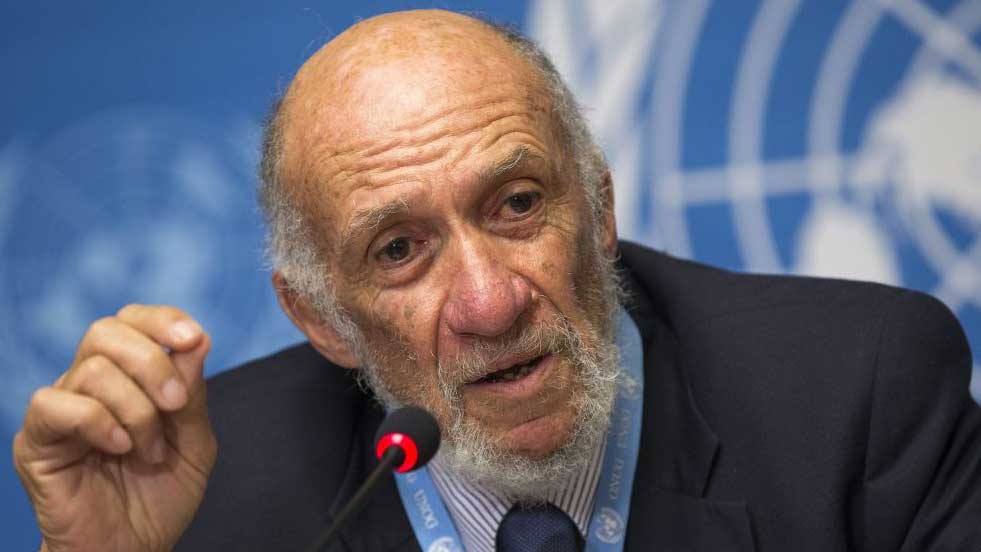 UN Special Rapporteur on the Situation of Human Rights in the Occupied Palestinian Territories Richard Falk, September 8, 2014 (Iran Review/CC BY 4.0)

The significance of the UN ESCWA report "Israeli Practices towards the Palestinian People and the Question of Apartheid", and of the reactions to it.

There has been lots of discussion prompted by the release of a report I jointly authored with Prof. Virginia Tilley, a study commissioned by the UN Economic and Social Commission for West Asia (ESCWA), and given by us the title, “Israeli Practices towards the Palestinian People and the Question of Apartheid.” The following interview, associated with my current visit to Belgium and France to speak on various aspects of the analysis and implications of the report, brings up to date the controversy generated at the UN by its release a few months ago, and by the willingness of the UN Secretary General to bow to U.S. pressure and order the removal of the report from ESCWA website. The interview questions were posed by veteran Middle East correspondent, Pierre Barbancey, and published in L’Humanité, Sept. 13, 2017.

1) You have published a report. Who asked for that and why?

The Report was commissioned by the UN Economic and Social Commission for West Asia in 2016 at the request of its Council, which has a membership of 18 Arab states. Professor Virginia Tilley and I were offered a contract to prepare a report on the applicability of the crime of apartheid to the manner in which Israeli policies and practices affected the Palestinian people as a whole, and not as in previous discussions of the applicability of apartheid, only to those Palestinians living since 1967 under Israeli occupation. The originality of the Report is to extend the notion of apartheid beyond the Occupied Palestinian Territories, and investigate its applicability to Palestinians living in refugee camps in neighboring countries, to those Palestinians enduring involuntary exile abroad, and to those existing as a discriminated minority in Israel.

2) What are the conclusions of the ESCWA report?

The most important conclusion of the report was that by careful consideration of the relevant evidence, Israel is guilty of the crime of apartheid as defined in the 1976 International Convention on the Suppression and Punishment of the Crime of Apartheid with regard to the Palestinian people as a whole; that is, Palestinians living under occupation as refugee and in involuntary exile, and as a minority in Israel are all victimized by the overriding crime. The report also found that Jews and Palestinians both qualify as a ‘race’ as the term is used in the Convention, and that Israel to sustain a Jewish state established by ‘inhuman acts’ a structure of oppressive and discriminatory domination by which the Palestinians were victimized as a people.

A second conclusion of importance is that the Rome Statute governing the International Criminal Court considers apartheid to be one type of ‘crime against humanity,’ which does not necessarily exhibit the same features as pertained to the apartheid regime in South Africa, the origin of the concept and crime, but not a template for its subsequent commission.

A third conclusion is that given the existence of apartheid, sustained to maintain a Jewish state in Palestine, all sovereign states, the UN, and civil society all have a legally grounded responsibility to take all reasonable steps of a nonviolent character to bring the commission of the crime to an end.

A fourth conclusion is that the Report is an academic study that draws conclusions and offers recommendation on the basis of a legal analysis, but it is not a duly constituted legal body empowered to make formal findings with respect to the allegations that Israel is guilty of apartheid.

3) What was the reaction?

From ESCWA the report was received with enthusiasm. We were told it was the most important report that ESCWA had ever published, with by far the largest number of requests for copies.

At the UN, the report and its authors were strongly attacked by the diplomatic representatives of the United States and Israel, with the demand the UN acted to repudiate the report. The Secretary General instructed the Director of ESCWA to remove the report from its website, and when she refused, she tendered her principled resignation explained in an Open Letter to the Secretary General. It should be appreciated that this was an academic report of international law experts, and never claimed to be an official reflection of UN views. A disclaimer at the outset of the Report made this clear.

4) What’s happened now with the report?

The status of the report within ESCWA is not clear. As far as I know the report itself has not been repudiated by ESCWA. In fact, it has been endorsed in a formal decision of the 18 foreign ministers of the ESCWA countries, including a recommendation to other organs of the UN System that the findings and recommendations of the report be respected. Beyond this, the report has altered the discourse in civil society and to some extent, in diplomatic settings, making the terminology of ‘apartheid’ increasingly displace the emphasis on ‘occupation.’

5) Israel says that the BDS Movement is anti-Semitic. What is your answer?

This is an inappropriate and even absurd allegation. The BDS Campaign is directed against Israeli policies and practices that violate international law and cause great suffering to be inflicted on the Palestinian people. It has nothing whatsoever to do with hostility to Jews as persons or as a people. The allegation is clearly designed to discredit BDS and to discourage persons from lending it support or participating in its activities. It is an unfortunate and irresponsible use of the ‘anti-Semitic’ label designed to manipulate public opinion and government policy, and inhibit activism.

6) In France, you can be put in court of you act for BDS, like a crime. Do you have any knowledge of similar situations in other countries?

I know there have been efforts in Europe and North America to criminalize support for BDS, but so far as I know, no formal laws have yet been brought into existence, and no indictments or prosecutions, outside of Israel and France, have taken place. I am not entire clear as to what has happened in Israel along these lines, although I know that Israel has been denying BDS supporters from abroad entry into the country.

7) What is your experience as Special Rapporteur of the United Nations in the Palestinian territories and in Israel?

My experience as UN Special Rapporteur in Occupied Palestine on behalf of the Human Rights Council was both frustrating and fulfilling. It was frustrating because during my six years as SR the situation on the ground and diplomatically worsened for the Palestinian people despite the documented record of Israeli human rights abuses. It was fulfilling because it enabled a forthright presentation of Israeli violations of basic Palestinian rights, which had some influence on the discourse within the UN, building support for corporate responsibility in relation to commercial dealing with Israel’s unlawful settlements on the West Bank and East Jerusalem as well as shifted some of the discourse within the UN from ‘occupation’ to ‘settler colonialism’ and ‘apartheid.’

It was also something of a personal ordeal as I was constantly subject to defamatory attacks by UN Watch and other ultra Zionist NGOs and their supporters, also organizing efforts to have me dismissed from my UN position and barred from lecturing on university campuses around the world. Fortunately, these efforts failed by and large, but they did have the intended effect of shifting the conversation from substance to auspices, from the message to messenger.

7) 70 years after the division of Palestine by the United Nations, how do you see that decision?

The 1947 partition resolution [General Assembly Resolution 181] was part of the exit strategy of the British colonial administration in the mandate period that controlled Palestine after the collapse of the Ottoman Empire at the conclusion of World War I. This approach was flawed in several basic respects: it neglected the will of the majority Arab and non-Jewish domestic population, and imposed a solution to the conflict without consulting the inhabitants; it also within its own terms failed to secure Palestinian rights or its sovereign political community, or even to uphold international humanitarian law. The UN never effectively implemented partition, and thus gave Israel the de facto discretion to impose its will on the entire territory of Palestine, including the expulsion of 750,000 Palestinians in the 1948 War, which overcame the demographic imbalance, and allowed itself to be branded to this day as ‘a democracy,’ even being hailed as ‘the only democracy in the Middle East.’ The US and Europe played a crucial geopolitical role in producing these developments, which rested on an Orientalist mentality lingering in the West.

Related article: The Myth of the UN Creation of Israel

8) Is there a solution for the Palestinians to recover their rights and to live in their own state?

It is difficult to envision the future at this stage, yet it is clear that the Palestinian national struggle is continuing both in the form of Palestinian resistance activities and by way of the international solidarity movement, of which the BDS Campaign is by far the most important undertaking. In my judgment until there is exerted enough pressure on the Israeli government to change course drastically, signaled by a willingness to dismantle the laws and procedures associated with the current apartheid regime used to subjugate the Palestinian people, there is no genuine prospect for a political solution to the conflict. Such a change of course in South Africa occurred, against all expectations at home and abroad, and partly in response to pressures generated by this earlier version of an international BDS campaign. My hope is that as the Palestinian people continue to win the ongoing Legitimacy War, this pattern will eventually be repeated, leading after a prolonged struggle to a sustainable peace between these two peoples based on the cardinal principle of equality. This will not happen, tragically, until there is much suffering endured, especially by Palestinians living under occupation, in refugee camps and involuntary exile, and as a discriminated minority within Israel. This Palestinian ordeal has gone on far too long. Its origins can be traced back at least a century ago when in an undisguised colonial gesture of the British Foreign Office pledged its support for the establishment of a Jewish homeland in historic Palestine to the World Zionist Movement in the form of the Balfour Declaration (1917). The competing national narratives of what transpired over the subsequent century tell different stories, each with an authentic base of support in the relevant community, but only the Palestine narrative can gain present comfort from the guidelines of international law, above all, the inalienable right of self-determination­.

The Rejection of Palestinian Self-Determination: The Struggle for Palestine and the Roots of the Israeli-Arab Conflict

Obstacle to Peace: The US Role in the Israeli-Palestinian Conflict (featuring a Foreword by Richard Falk)

This article was originally published at RichardFalk.Wordpress.com on September 20, 2017.