The Genocide of the Rohingya: Big Oil, Failed Democracy and False Prophets 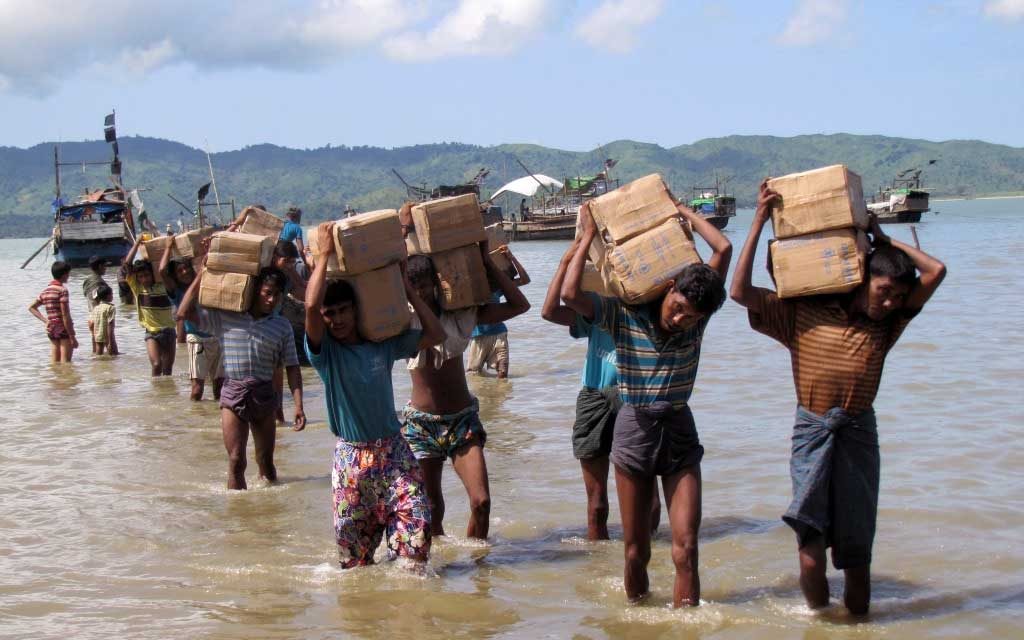 The Rohingya people have been subjected to a brutal and systematic genocide while western nations line up to exploit the resources of Burma.

To a certain extent, Aung San Suu Kyi is a false prophet. Glorified by the west for many years, she was made a ‘democracy icon’ because she opposed the same forces in her country, Burma,  at the time as the US-led western coalition that was isolating Rangoon for its alliance with China.

Aung San Suu Kyi played her role as expected, winning the approval of the Right and the admiration of the Left. And for that, she won a Nobel Peace Prize in 1991; she joined the elevated group of ‘The Elders’ and was promoted by many in the media and various governments as a heroic figure, to be emulated.

Hillary Clinton once described her as “this extraordinary woman.” The ‘Lady’ of Burma’s journey from being a political pariah in her own country, where she was placed under house arrest for 15 years, finally ended in triumph when she became the leader of Burma following a multi-party election in 2015. Since then, she has toured many countries, dined with queens and presidents, given memorable speeches, received awards, while knowingly rebranding the very brutal military that she had opposed throughout the years. (Even today, the Burmese military has a near-veto power over all aspects of government.)

But the great ‘humanitarian’ seems to have run out of integrity as her government, military and police began conducting a widespread ethnic cleansing operation that targeted the ‘most oppressed people on earth’, the Rohingya. These defenseless people have been subjected to a brutal and systematic genocide, conducted through a joint effort by the Burmese military, police and majority Buddhist nationalists.

The so-called “Cleansing Operations” have killed hundreds of Rohingya in recent months, driving over 250,000 crying, frightened and hungry people to escape for their lives in any way possible. Hundreds more have perished at sea, or hunted down and killed in jungles.

Stories of murder and mayhem remind one of the ethnic cleansing of the Palestinian people during the Nakba of 1948. It should come as no surprise that Israel is one of the biggest suppliers of weapons to the Burmese military. Despite an extended arms embargo on Burma by many countries, Israel’s Defense Minister, Avigdor Lieberman, insists that his country has no intentions of halting its weapons shipments to the despicable regime in Rangoon, which is actively using these weapons against its own minorities, not only Muslims in the western Rakhine state but also Christians in the north.

One of the Israeli shipments was announced in August 2016 by the Israeli company TAR Ideal Concepts. The company proudly featured that its Corner Shot rifles are already in ‘operational use’ by the Burmese military.

Israel’s history is rife with examples of backing brutal juntas and authoritarian regimes, but why are those who have positioned themselves as the guardians of democracy still silent about the bloodbath in Burma?

Nearly a quarter of the Rohingya population has already been driven out of their homes since October last year. The rest could follow in the near future, thus making the collective crime almost irreversible.

Aung San Suu Kyi did not even have the moral courage to say a few words of sympathy to the victims. Instead, she could only express an uncommitted statement: “we have to take care of everybody who is in our country”. Meanwhile, her spokesperson and other mouthpieces launched a campaign of vilification against Rohingya, accusing them of burning their own villages and fabricating their own rape stories, while referring to Rohingya who dare to resist as ‘Jihadists‘, hoping to link the ongoing genocide with the western-infested campaign aimed at vilifying Muslims everywhere.

But well-documented reports give us more than a glimpse of the harrowing reality experienced by the Rohingya. A recent UN report details the account of one woman, whose husband had been killed by soldiers in what the UN described as “widespread as well as systematic” attacks that “very likely commission of crimes against humanity.”

“Five of them took off my clothes and raped me,” said the bereaved woman. “My eight-month-old son was crying of hunger when they were in my house because he wanted to breastfeed, so to silence him they killed him with a knife.”

Fleeing refugees that made it to Bangladesh following a nightmarish journey spoke of the murder of children, the rape of women and the burning of villages. Some of these accounts have been verified through satellite images provided by Human Rights Watch, showing wiped out villages throughout the state.

Certainly, the horrible fate of the Rohingya is not entirely new. But what makes it particularity pressing is that the west is now fully on the side of the very government that is carrying out these atrocious acts.

And there is a reason for that: Oil.

Massive deposits of oil that have remained untapped due to decades of western boycott of the junta government are now available to the highest bidder. It is a big oil bonanza, and all are invited. Shell, ENI, Total, Chevron and many others are investing large sums to exploit the country’s natural resources, while the Chinese—who dominated Burma’s economy for many years—are being slowly pushed out.

Indeed, the rivalry over Burma’s unexploited wealth is at its peak in decades. It is this wealth—and the need to undermine China’s superpower status in Asia—that has brought the west back, installed Aung San Suu Kyi as a leader in a country that has never fundamentally changed, but only rebranded itself to pave the road for the return of ‘Big Oil’.

However, the Rohingya are paying the price.

Do not let Burmese official propaganda mislead you. The Rohingya are not foreigners, intruders or immigrants in Burma.

Their kingdom of Arakan dates back to the 8th Century. In the centuries that followed, the inhabitants of that kingdom learned about Islam from Arab traders and, with time, it became a Muslim-majority region. Arakan is Burma’s modern-day Rakhine state, where most of the country’s estimated 1.2 million Rohingya still live.

The false notion that the Rohingya are outsiders started in 1784 when the Burmese King conquered Arakan and forced hundreds of thousands to flee. Many of those who were forced out of their homes to Bengal, eventually returned.

Attacks on Rohingya, and constant attempts at driving them out of Rakhine, have been renewed over several periods of history, for example: following the Japanese defeat of British forces stationed in Burma in 1942; in 1948; following the takeover of Burma by the Army in 1962; as a result of so-called ‘Operation Dragon King’ in 1977, where the military junta forcefully drove over 200,000 Rohingya out of their homes to Bangladesh, and so on.

In 1982, the military government passed the Citizenship Law that stripped most Rohingya of their citizenship, declaring them illegal in their own country.

The war on the Rohingya began again in 2012. Every single episode, since then, has followed a typical narrative: ‘communal clashes’ between Buddhist nationals and Rohingya, often leading to tens of thousands of the latter group being chased out to the Bay of Bengal, to the jungles and, those who survive, to refugee camps.

Amid international silence, only few respected figures like Pope Francis spoke out in support of the Rohingya in a deeply moving prayer last February.

The Rohingya are ‘good people’, the Pope said. “They are peaceful people, and they are our brothers and sisters.” His call for justice was never heeded.

Arab and Muslim countries remained largely silent, despite public outcry to do something to end the genocide.

Reporting from Sittwe, the capital of Rakhine, veteran British journalist, Peter Oborne, described what he has seen in an article published by the Daily Mail on September 4:

“Just five years ago, an estimated 50,000 of the city’s population of around 180,000 were members of the local Rohingya Muslim ethnic group. Today, there are fewer than 3,000 left. And they are not free to walk the streets. They are crammed into a tiny ghetto surrounded by barbed wire. Armed guards prevent visitors from entering — and will not allow the Rohingya Muslims to leave.”

With access to that reality through their many emissaries on the ground, western government knew too well of the indisputable facts, but ignored them, anyway.

When US, European and Japanese corporations lined up to exploit the treasures of Burma, all they needed was the nod of approval from the US government. The Barack Obama Administration hailed Burma’s ‘opening’ even before the 2015 elections brought Aung San Suu Kyi and her National League for Democracy to power. After that date, Burma has become another American ‘success story’, oblivious, of course, to the facts that a genocide has been under way in that country for years.

The violence in Burma is likely to escalate and reach other ASEAN countries, simply because the two main ethnic and religious groups in these countries are dominated and almost evenly split between Buddhists and Muslims.

The triumphant return of the US-west to exploit Burma’s wealth and the US-Chinese rivalries is likely to complicate the situation even further, if ASEAN does not end its appalling silence and move with a determined strategy to pressure Burma to end its genocide of the Rohingya.

People around the world must take a stand. Religious communities should speak out. Human rights groups should do more to document the crimes of the Burmese government and hold to account those who supply them with weapons.

It is the least we expect from the man who stood up to Apartheid in his own country, and penned the famous words: “If you are neutral in situations of injustice, you have chosen the side of the oppressor.”