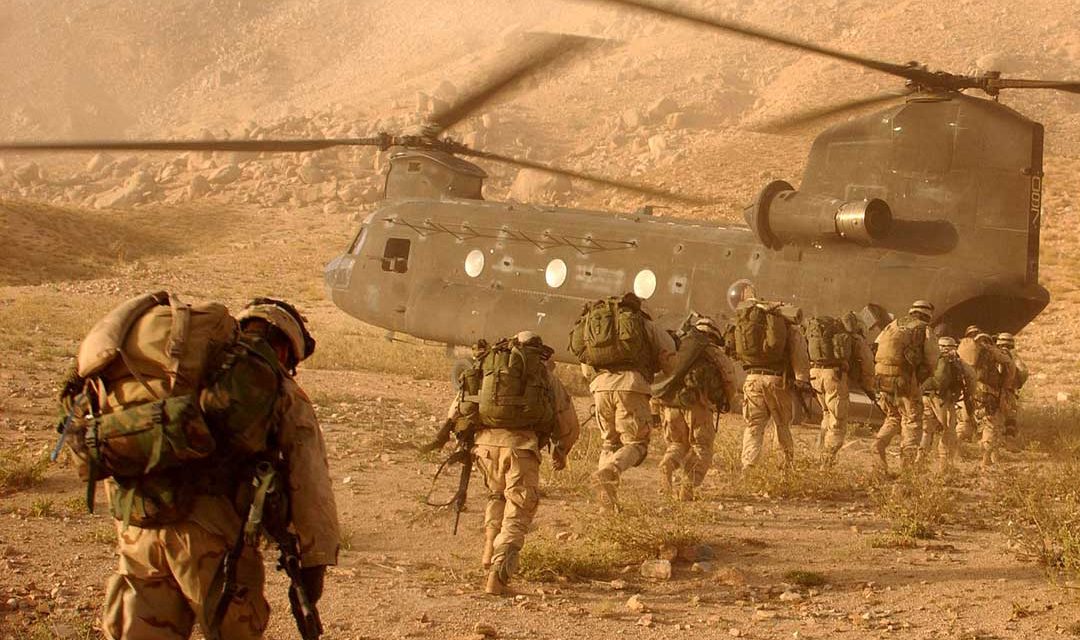 US Army soldiers in the Daychopan district of Afghanistan on September 4, 2003 (US Army/Public Domain)

Trump had it right when he was calling for US armed forces to withdraw from Afghanistan.

Trump had it right the first time. In his 2016 presidential campaign he repeatedly argued that 16 years of failed warfare in Afghanistan are enough.

Indeed, years that cost us more than 23,000 killed or wounded and $685.6 billion in Afghanistan (on top of more than 36,000 American casualties and $814.6 billion in Iraq) argue against more investment in that dubious conflict. As in the Vietnam and Iraq civil wars, foreign intervention is a losing proposition.

In his TV address to the nation on August 21, Trump reversed his campaign pledge to exit Afghanistan. Without specifying troop limits, time frame or exit strategy, the President announced a commitment of new U.S. military support and a “plan for victory” (without either describing the “plan” or defining “victory”).

He argued that a rapid exit would create a vacuum for terrorists, and thus present a security threat for Americans. Yet in describing the enemy, he wavered between the Taliban on the one hand and Al Qaeda/ISIS on the other. Nor did he explain why either group presents an existential danger to the United States.

The Taliban is not an international terrorist organization. It has not attacked or threated countries outside of Afghanistan. Rather it is engaged in an intensifying civil war against a corrupt

Government in Kabul. And it’s winning that war. The Taliban now controls between 35 and 50 percent of the country. As demonstrated in Vietnam and Iraq, local liberation armies have more staying power than outside forces.

While Al Queda and ISIS may gain ground in Afghanistan, the greater dangers posed by those (and other) jihadist groups would seem to lie with ISIS fighters who return to their home countries and with young Muslims who become radicalized through the Internet and extremist mosques. Wouldn’t it be smarter to focus on those risks than the distant and more costly targets?

Moreover, we have seen that when our military eliminates terrorist leaders, new ones quickly emerge to take their places. Violence inevitably fails to stem violence.

Trump’s proposed re-escalation of U.S. military intervention shows a non-understanding of the regional dynamics. With Afghanistan as a pawn in the India-Pakistan proxy war, the latter’s fear of Indian encirclement makes it unlikely that the Pak military will stop giving safe haven to the Taliban, even if the U.S. withholds aid. Furthermore, the Pakistanis have come to rely more heavily on China as a strategic partner.

More troops at whatever level would send a huge new bill to U.S. taxpayers. The Congressional Research Service estimates that the annual cost of keeping a single American soldier in Afghanistan is $3.9 million. As the troop numbers increase, U.S. taxpayers may start to complain, especially when they realize that the true measure of the war cost includes “long-term medical care and disability compensation for service members, veterans and families”—bringing the true cost of the Iraq and Afghanistan wars to date to at least $4 trillion.

Trump failed to disclose any plan specifics that would allow us to anticipate costs. He was non-transparent on both aims (beyond “we will win”) and commitments. Don’t Americans have a right to know what the Commander-in-Chief has in mind regarding troop numbers and time horizon? Shouldn’t Congress exercise its right under the Constitution (Article I, Section 8) “to declare war”?

Even beyond military expenditures are the ongoing costs of stabilizing the Kabul government. The Special Inspector General for Afghan Reconstruction regularly highlights the lack of reconstruction progress, despite the $117 billion spent by the Pentagon and USAID to date—more money in real terms than the sums spent on the Marshall Plan for post-WW2 Europe. Yet rampant corruption and drug dealing continue to plague the Afghan government.

Since the Taliban was able to make substantial gains when the U.S. had 100,000 troops in Afghanistan, can we really believe that the addition of a few thousand soldiers to the roughly 8,000 now in place will turn the tide?

A longer term concern: with North Korea and Venezuela posing new foreign policy challenges, will Trump continue to rely mostly on his inner circle of generals for advice? If so, military options, as in this case, will likely drown out the diplomatic ones.