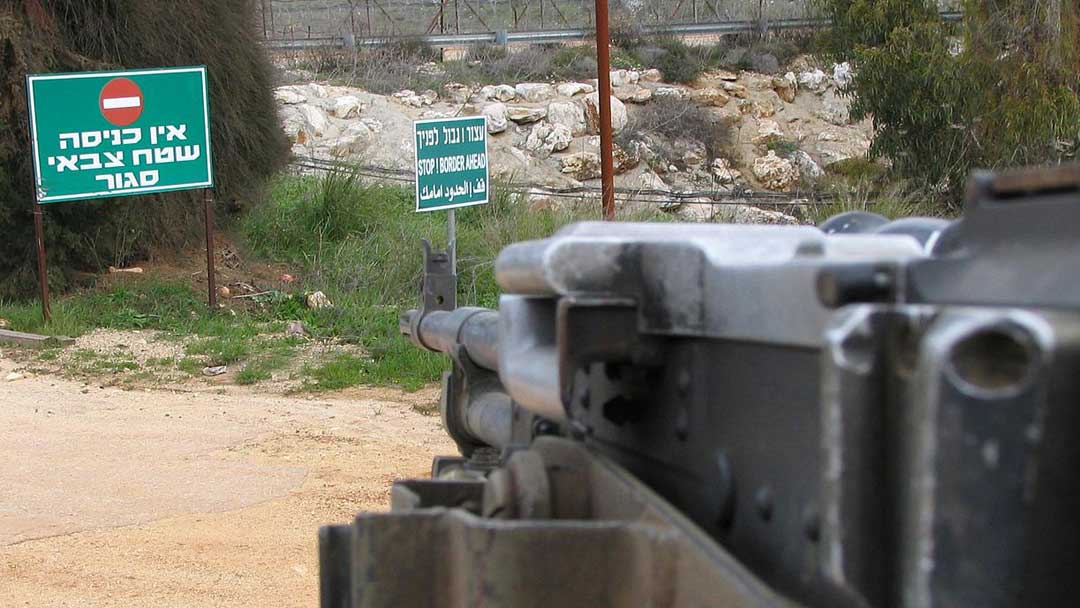 The border of Israel and Lebanon. The Hebrew signs say "No entrance, closed military area" and "Stop, border ahead". (Johnny Zoo/CC BY-SA 3.0)

Israel does not want Hezbollah to have an effective deterrent capability in the event it wages another war against the civilian population of Lebanon.

If anyone thinks Israel’s recent warnings about not being able to tolerate the reported establishment of Iranian-built Hezbollah armament factories in Lebanon increases the probability of an imminent war, they couldn’t be more wrong.

However, mighty Israel is certainly not bluffing when it makes a point of drawing strict red lines on the need to deprive the Islamic resistance movement of advanced weaponry in an effort to minimize the destruction it could inflict on them in the event of another war.

After all, it has repeatedly struck suspected weapon storages of advanced Iranian arms near Damascus airport and intercepted maritime efforts in the same regard.

Yet the irony is that for all the repeated warnings from a state that has a “qualitative military edge” against her non-state adversary in every conceivable aspect, nuclear-armed Israel appears to have strained itself at the leash by limiting its reaction to words and not bombs.

Israel has long invested significant resources into producing a detailed matrix covering the potential avenues by which Hezbollah is accumulating advanced weaponry – other than the assumed Iranian planeloads through Damascus airport and generous stockpiles bequeathed to them from the Syrian Armed Forces.

Since the onset of the Syrian civil war, it has been hypothesizing, sometimes publicly, about the additional possibilities as to how Hezbollah is likely arming itself and has been adamant it must be through air shipments.

It began with accusing Iran of hiding deliveries of armaments in regular commercial cargo at Beirut airport whose security is headed by a nominee of Hezbollah – but to no avail.

Then it conjured up the idea that perhaps Iran was making circular overflights between Syrian airbases and Lebanon’s Bekaa Valley with small military aircraft that had their transponders deceptively switched off in order to outsmart flight trackers.

The hypothesis was that perhaps these small aircraft were parachuting small crates of weapons at predetermined coordinates in some sophisticated manner that are in turn audaciously collected by Hezbollah operatives in the dead of the night.

But they appeared to have quietly abandoned the idea upon failing to convince anyone of its realistic possibility.

Hezbollah’s resort to a domestic arms industry with the blessing of Iran’s spiritual leadership, to which it holds ultimate authority, dates back in one way or another to the 1990s.

It is not part of a military-industrial complex.

The funding, material acquisition, research, preparation and usage of end products remain confined to, and for the sole use of, Hezbollah as a movement.

A rich concentration of Iranian-trained engineers, scientists and technicians along with a free flow of Iranian Revolutionary Guard Corps (IRGC) resources toward military research and development has gradually facilitated the rapid expansion of Hezbollah’s locally produced weapons.

Besides the manufacturing of small arms, ammunition, drones, mortars, self-propelled artillery and components for anti-tank and sub-aqueous missiles, Hezbollah’s main emphasis has inevitably been on developing game-changing weapons for an all-out war against Israel: crude variants of deadly long-range missiles.

It’s a no-brainer that the location of these secretive facilities are most likely to be based in Hezbollah-controlled constituencies in the country in addition to dozens of research and storage sites that were at one time additionally dispersed next door in Syria.

But the logic behind this arms production is not, as is often cited, a knee-jerk reaction to Israel’s 2012 destruction of a Iran’s Yarmouk weapons factory in Khartoum, Sudan, repeated targeting of arms shipments in Damascus, or even a counterbalance to the increasing complexities associated with smuggling.

It was simply to provide a degree of preparedness, self-reliance and ultimately survival for the movement that was, and is, at the frontline of the Islamic-revolution inspired battle against Israel and other defined enemies.

And by a recent display of everything from vehicle-mounted guns, bulldozers, tanks, armored personnel carriers, rapid response motorcycles and long-range artillery, you’d think that either Israel’s staccato of threats to stymie Hezbollah’s accumulation of weapons have either become long in the tooth or the Islamic movement has become hard of hearing.

A Means to an End

For all the hysteria, Israel’s threats over the disclosure of these armament factories have not come in a vacuum, they’re part of a long-term strategy to gain international legitimacy in order to broaden its bank of disparate targets across Lebanese civilian areas in any future conflict with Hezbollah.

That movement’s entrenchment in Syria and the inadvertent door that its opened to a second front from which it can attack Israel, has increased the sense of vulnerability already felt in Israeli military circles as battle-hardened Hezbollah goes from victory to victory against ISIL, its affiliates and terrorist mercenaries that are primarily backed by a consortium of regional countries.

Israel is clearly trying to make up for this by ratcheting up its on-going psychological war effort in an attempt to put a buoyant Hezbollah on the back foot, to make it aware that any war-causing provocation would unleash a threshold of military action like never before.

The only thing that currently stops it from risking military escalation to neutralize this growing threat is mutual deterrence, the knowledge that any harm Israel inflicts on Lebanon or Hezbollah will be reciprocated onto its already-vulnerable home front with a dimension of damage unseen since its creation.

It has calculated that the best it can do in the interim period, where both the Israeli public and its international backers evidently have no appetite to see another war, is to hope that the publicity gained from exposing Hezbollah’s rearming and intelligence gathering efforts will one day be worth their weight in gold.

If and when war does break out, it would feel justified to ‘strafe’ anything in Lebanon on the premise that they’ve been forewarning the world for years about Hezbollah’s increasing war preparations and interspersed belligerence towards the Jewish state.

Even as it fails to pinpoint the location of the revealed weapon factories, the steady flow of information ‘purporting’ to have exposed apparent Hezbollah missile storages in civilian villages and the need to diversify its selection of targets as a corollary, remains a constant.

The only recent addition to this ‘purporting’ is the apparent gathering of intelligence by Hezbollah on the border under the guise of an environmental group.

But as it stands, ruling out the chances of Hezbollah making them privy to instruction manuals and assembly points for their missile production anytime soon, mighty Israel will continue to remind its benefactors that the hand of war and peace is not upon its shoulder but around its throat.