Why We Can and Must End Our Greatest Crime 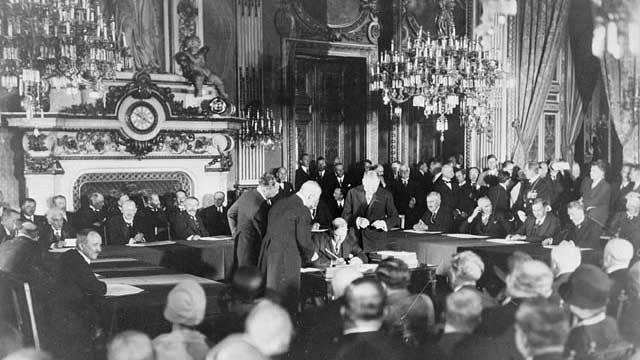 Despite the outlawing of war under the 1928 Kellogg-Briand Pact, as well as the UN Charter, wars rage on.

Remarks on August 3 at Democracy Convention in Minneapolis.

It’s unusual on Kellogg Blvd. in St. Paul to encounter anyone who knows why it’s named that. A bunch of us are going to go over there with flyers Saturday morning and I hope you’ll join us.

Nobel Peace Prize laureate Frank Kellogg of St. Paul has his name on the treaty whose creation was probably the single biggest news story of 1928, the Kellogg-Briand Pact, a treaty listed as in effect on the U.S. State Department’s website, a treaty that bans war. Kellogg is buried in the National Cathedral in Washington, D.C., but nobody there knows who he was either, and if he were to come back to life few would know it as he’d surely be kept out of the corporate media.

Imagine trying to end war! What a joke! What an outrage! What an insult to our brave young men and women attacking nations around the globe, endangering us with blowback, and dying first and foremost from suicide! Secretary of State Kellogg should be ashamed of himself!

And yet he bowed to nearly-universal public pressure, switching from cursing peace activists to advancing their demands and lying and scheming to deny that Nobel peace prize to a leading activist and claim it for himself. The U.S. Senate ratified his treaty 85-1. Senators gave speeches against it and then voted for it, explaining that they wouldn’t be allowed back in their states if they voted it down. And it wasn’t a joke.

Prior to the Pact, war, the conquering of territory, and most associated atrocities were legal, even understood as law enforcement. The first ever prosecutions of the crime of war, following World War II, were based on violation of the Peace Pact. For whatever combination of reasons, wealthy armed nations have not gone to war with each other since. Yet numerous wars against and among poor nations rage on, in routine violation of both Kellogg-Briand and the United Nations Charter.

The massive and mainstream movement of the 1920s to “outlaw” war is unfairly disparaged as having generally imagined that merely banning war would end it. This claim is no more fact-based than the idea that Christopher Columbus believed the earth was flat. Leading outlawrists wanted war and preparations for war, including weapons dealing, ended, and replaced by the rule of law, conflict prevention, dispute resolution, and moral, economic, and individual punishment and ostracism. Their project is our project should we choose to pick up the baton, and we might do so more effectively if we learn some lessons from the past.

The outlawrists’ arguments were very often moral ones in a manner much less common in today’s cynical and advertising-saturated world in which activists have been conditioned to appeal only to selfish interests. The outlawrists I find most inspiring often used an analogy to dueling, pointing out that not only had aggressive dueling been banned, but the entire institution eliminated, including “defensive dueling.” This is what they wanted done to war.

Whatever you make of the wisdom of or the actual presence of defensive war thinking in the 1920s — and senators who ratified the treaty claimed that it silently permitted, without defining, so-called defensive war — it is my contention that we cannot survive defensive war thinking much longer. I believe it permits the military spending that kills first and foremost by diverting resources from human and environmental needs. Small fractions of military spending could end hunger, unclean water, various diseases, and even the use of fossil fuels. A theoretical just war would have to be so just as to outweigh decades of this deadly diversion of resources as well as all the blatantly unjust wars it has been generating, as well as the ever-increasing risk of nuclear apocalypse created by the institution of war, not to mention the damage that institution does to the natural environment, civil liberties, domestic policing, and representative government.

Since World War II, during what many U.S. academics think of as a golden age of peace, the United States military has killed some 20 million people, overthrown at least 36 governments, interfered in at least 82 foreign elections, attempted to assassinate over 50 foreign leaders, and dropped bombs on people in over 30 countries.
It’s uncomfortable to consider, but possible that the U.S. government has a wee bit of a war problem. A December 2013 Gallup poll in 65 countries found the United States the most common top answer to the question of what country was the greatest threat to peace in the world. During President Barack Obama’s presidency, the United States used bombs or missiles on Afghanistan, Pakistan, Iraq, Syria, Somalia, Yemen, Libya, and the Philippines. In last year’s Republican presidential primaries a debate moderator asked a candidate if he would be willing to kill hundreds and thousands of innocent children, a question that created no significant scandal. Last week, controversy followed a White House announcement that henceforth it would fight on only one side of the war in Syria, a war that the head of U.S. Special operations last week said was clearly illegal for the U.S. to be in. Many Americans believe that wars somehow in general are inevitable, and this week Senator Lindsay Graham declared that a devastating war in Korea is virtually inevitable. Why? Because he’ll start it, because we must choose between regional stability in Asia and the security of the Fatherla – I mean the Homeland, as if destroying regions of the globe isn’t exactly what endangers those responsible.

Since World War II, during what many U.S. academics think of as a golden age of peace, the United States military has killed some 20 million people, overthrown at least 36 governments, interfered in at least 82 foreign elections, attempted to assassinate over 50 foreign leaders, and dropped bombs on people in over 30 countries. Lists of these activities are on my website at DavidSwanson dot org. The United States has so-called “special forces” operating in two-thirds of the world’s countries and non-special forces stationed in three-quarters of them. The United States spends roughly as much on militarism as the rest of the world combined and possesses 98 to 99 percent of the military bases in the world that are located on foreign soil. Even the Congressional Progressive Caucus budget proposes to INCREASE military spending, only to do so more slowly than Trump proposes.

War has been stigmatized over the past 90 years, but only others’ wars. U.S. wars have been normalized. And abolition campaigns have been marginalized. We need to oppose each new and ongoing war with everything we have. But doing so will not be enough. We can’t even keep track of all the wars at this point. We have to oppose the entire institution of war. It’s the only thing that makes sense. You can’t support having wars and not support doing everything to win them. You can’t accept the legalization of mass murder and somehow put an end to torture and imprisonment and surveillance. You can’t back the use of white phosphorus and napalm in wars justified as expressions of outrage at the use of anthrax and expect people who don’t own television networks or sit in Congress to take you seriously.

On Sunday morning a bunch of us are going, and hope you’ll come, to a ceremony at the Peace Garden in Minneapolis to remember Hiroshima and Nagasaki. There is now a wonderful global movement to ban nuclear weapons that needs all our support. But threatening North Korea and Russia, and making plans to attack Iran, is a great way to spread nuclear weapons. Nuclear apocalypse is a growing danger on a par with climate chaos and will continue to grow unless war abolition starts to succeed.

War and preparations for war are our biggest destroyers of water, air, land, and atmosphere. War kills first and foremost by removing resources from where they are needed, including from famines and disease epidemics created by war. Any activism that seeks funding for any human or environmental needs has to look to ending war. It is where all the money is, more money every single year than could be taken once and only once from the billionaires. In September, World Beyond War is planning a conference on the topic of how peace and environmental activists can work together. We hope for some progress on that and other collaborations here this week as well.

And while peace is good for the spread of democracy, and war disastrous, existing so-called democracies do not bring us peace. Real democracy might. Polling has found the U.S. public to favor a roughly $41 billion reduction in military spending, an approximate $94 billion gap away from President Donald Trump’s proposal of a $54 billion increase. There is no question that direct democracy would mean less war. It’s worth exploring how we can more closely approximate that outcome given the government we have.