John McCain: Russia, not ISIS, is the Bigger Threat 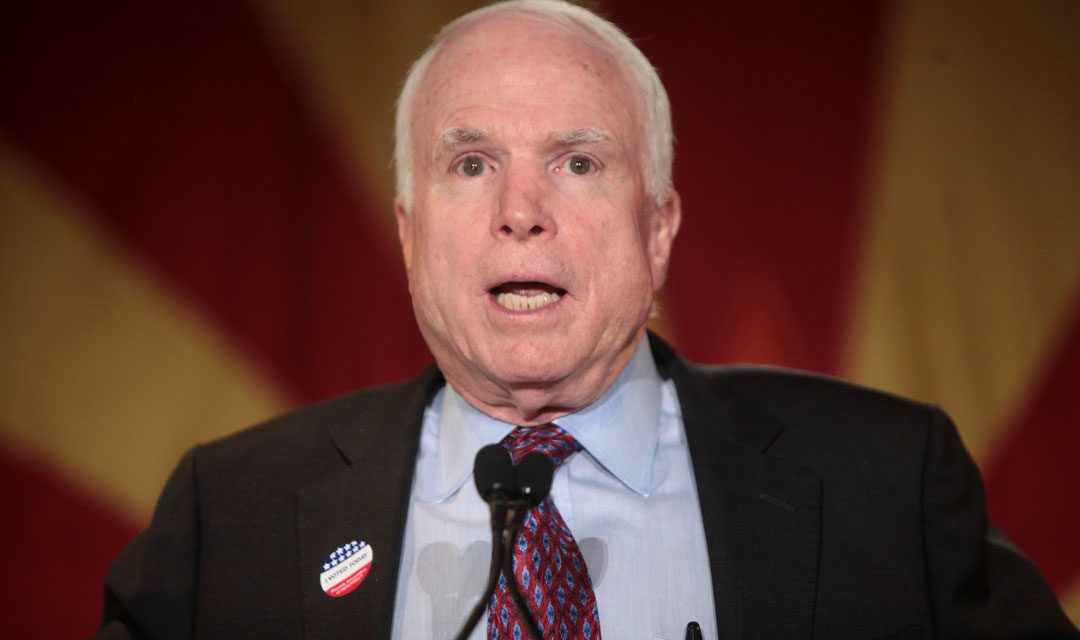 John McCain rails against Russia for its alleged interference in the election but has no problem with the US interfering in other nations' affairs.

U.S. Senator John McCain has stated clearly in an ABC News (Australia) interview that Russia is a ‘bigger threat’, or ‘greater challenge’ that the Islamic State organisation.[1] The only surprise about this statement is that McCain made it in such an open and unequivocal manner.  Jihadism was a creation of the U.S.A. originally to oust Russia from Afghanistan, in a long running war that was intended to weaken Russia. This played a part in the implosion of the USSR.  Islamism was then used to destroy Milosevic and fracture Yugoslavia for the purpose of gaining the mineral wealth of Kosovo. Gaddafi was another inconvenience who was removed by U.S.-based Islamic extremists. ISL has been a convenient factor in trying to destroy Assad’s Syria as one of the primary remaining bugbears of the neocons and their Zionist allies. In practice, whether by coincidence or design, ISL is a handy instrument to have dumped on any ‘rogue’ to create the chaos that justifies U.S. military intervention.

Islamic Chechen separatists are also backed by the U.S.A. as a catspaw against Russia. Indeed, McCain is one of the more vocal supporters of Chechnya’s separatism. Chechnya, Ukraine… is there a pattern here? The USA gives asylum to Ilyas Akhmadov, who is wanted by Russia as a leading Chechen terrorist leader. Has been funded by the National Endowment for Democracy.[2] In 2008 McCain called for the recognition of a Chechen state.[3]

As seems to be the habit, McCain has his own NGO, the McCain Institute for International Leadership, at Arizona State University. Among the trustees are Lynn Forester de Rothschild of the famous banking dynasty; investment banker and Kissinger colleague John F. Lehman; former Senator and Zionist notable Joseph Lieberman, et al.[4]

McCain alleged that Russia intervened with the internal affairs of other nations, stating:

“I think ISIS can do terrible things. But it’s the Russians who tried to destroy the fundamental of democracy and that is to change the outcome of an American election. I’ve seen no evidence they succeeded, but they tried and they are still trying to change elections. They just tried to affect the outcome of the French election. So I view Vladimir Putin—who has dismembered Ukraine, a sovereign nation, who is putting pressure on the Baltics—I view the Russians as the far greatest challenge that we have.”[5]

Yet the McCain Institute was created to change the character of the world—no less—in the image of the U.S.A. according to the “McCain family’ ethos; which is to say the globalist ideology. The McCain Institute states that it is committed to ‘sustaining America’s global leadership.” If this does not involve interfering in the internal affairs of other states, in the name of ‘democracy and human rights’, then what? The Institute states that it serves to “identify, develop and train the next generation of American and international leaders.”[6] That is to say, the Institute selects likely dupes, cultivates them and tries to foist them on to other states, so that they will serve as U.S. lackeys in upholding America’s ‘global leadership.”

Among what the McCain Institute calls the “next generation leaders” who they train up and direct, Venezuelan journalist Leon Hernandez, writing of his observations of the Institute’s Sedona conference on 2017 commented that he “felt a particular empathy for those speakers who voiced opposition to regimes in Russia and Syria.”[7] This is significant given the present riots in Venezuela, one of those states whose existence is inconvenient to America’s “global leadership.”

The McCain Institute states it ‘selects target countries and sectors that are specific to each program year.” “A Leadership Action Plan (LAP) is a detailed plan of character-driven action for implementation that creates change in your home environment that impacts the public, private or social sector. NGLs [Next Generation Leaders] are expected to implement their LAP upon the conclusion of the initial program year.”[8] One might wonder whether the selection of individuals to be trained at Arizona university, in Washington D.C. and New York to implement an ‘action plan’ that ‘changes’ the ‘target’ country in “public, private or social sectors” is interference in the affairs of another state? The word subversion comes to mind. NGL’s are sponsored by ‘placement organisations’ that might be public or private; that is to say, an NGL might be sponsored by the U.S. State Department for example.  Once these NGL’s are trained and sent back to their homelands they are expected to be part of a global network and report on what they are achieving: “NGLs are called on to be active members in the NGL Global Network and to inform the Institute on a bi-annual basis of the status of their LAPs and their impact in their home environments.”[9]

If subversion and colour revolutions do not work, just try war. McCain spent New Year’s Eve 2016 fraternising with frontline Ukrainian troops, tweeting: “We stand w/them in their fight against #Putin’s aggression.”[10] Has Putin or any other Russian official or politician ever done anything remotely near as provocative and war-mongering against the USA? McCain’s actions were a flagrant endorsement for military confrontation against Russia and against those Russians who have broken with the Ukraine to defend their ‘human rights’. However, ‘human rights’ like ‘democracy’ since the days of President  Woodrow Wilson’ is nothing but a sham slogan used by the USA to justify any action to serve its world- conquering interests, or ‘the American way of life’ as McCain and sundry others put it. Ukrainians are serving as proxy troops against Russia, as did the Mujahedeen in Afghanistan.

McCain is pushing for economic sanctions against Russia, with the allegation of election interference as the pretext: “‘We have done nothing since the election last November to respond to Vladimir Putin’s attempt to change the outcome of our elections. So, way to go Vladimir. We haven’t responded at all,’ he said. ‘Hopefully when we get back from recess the Senate will enact sanctions on Russia.’”[11]

However, in 2014 the U.S.A. was very active in ‘regime change’ in the Ukraine, pouring in money. Russian senior adviser Sergei Glazyev said at the time that the U.S.A. was spending $20m (£12.3m; 14.8m euros) a week on Ukrainian opposition groups, supplying ‘rebels’ with arms, among other things. At the time, intercepted conversations between the State Department’s Victoria Nuland and US Ambassador Geoffrey Pyatt revealed them discussing the merits of three opposition leaders. Glazyez accused the U.S.A. of ‘interfering flagrantly and unilaterally in the internal affairs of Ukraine. There is information that within the grounds of the American embassy, there is training for fighters, that they’re arming them’. The U.S. remained mute on the allegations.[12]

Both the National Endowment for Democracy (NED) and the International Republican Institute (IRI) are among the organisations shut down in Russia for their interference in internal affairs. Nonetheless, in 2015 NED expended $US 18,555,967[13] on trying to destroy Russia, funding anti-state propaganda euphemistically called ‘journalism’ and ‘freedom of information’, and backing agitators euphemistically called ‘supporting civil society’. While there are many other NGOs that are also pouring in funds, NED is subsidised by the U.S. State Department and was formed by Congressional mandate in 1983, reports to Congress and consults with the State Department, in accordance with the terms of its founding.

The International Republic Institute is chaired by McCain. IRI is yet another NGO committed to ‘freedom’ as defined by the globalist elite. IRI states that is works “Throughout Eurasia” “with political parties, citizens and public officials” to create what IRI deems is a suitable political system. IRI “supports multi-party structures,” and aims to “expand voter outreach.” Another aim is more blatantly stated: “Applying methodologically-sound public opinion research to develop issue-based political party platforms and campaign strategies that address voter concerns’; and ‘building skills for candidates.”  That is, IRI trains budding politicians, creates parties, and formulates what the issues are.[14] Again, there is a relationship between this NGO and the U.S. Government. Funders include USAID.

Given the expenditure of money and the many other ways the U.S.A. and its plutocracy works against Russia one can be sure that the present state is the only real hindrance left to ‘American triumphalism’. McCain is a leading spokesman for a globalist coterie, and he has declared ‘Putin’s Russia’ to be the main enemy.

Trump and Putin met for a prolonged duration on 7 July. The day previously Trump had spoken in Poland using all the blatantly Russophobic rhetoric of the Cold War era, while NATO troops prepare to engage in the largest “Saber Guardian” exercises, across Bulgaria, Hungary and Romania. Despite the prompt purging of the Trump administration within weeks of his inauguration, of perceived pro-Russia elements such as General Flynn, in favour of Russophobes such as Lt. General McMaster, Rex Tillerson as Secretary of State might be a restraining factor, while Trump remains an enigma.

[7] “We chose to fight,” https://www.mccaininstitute.org/blog/we-chose-to-fight/