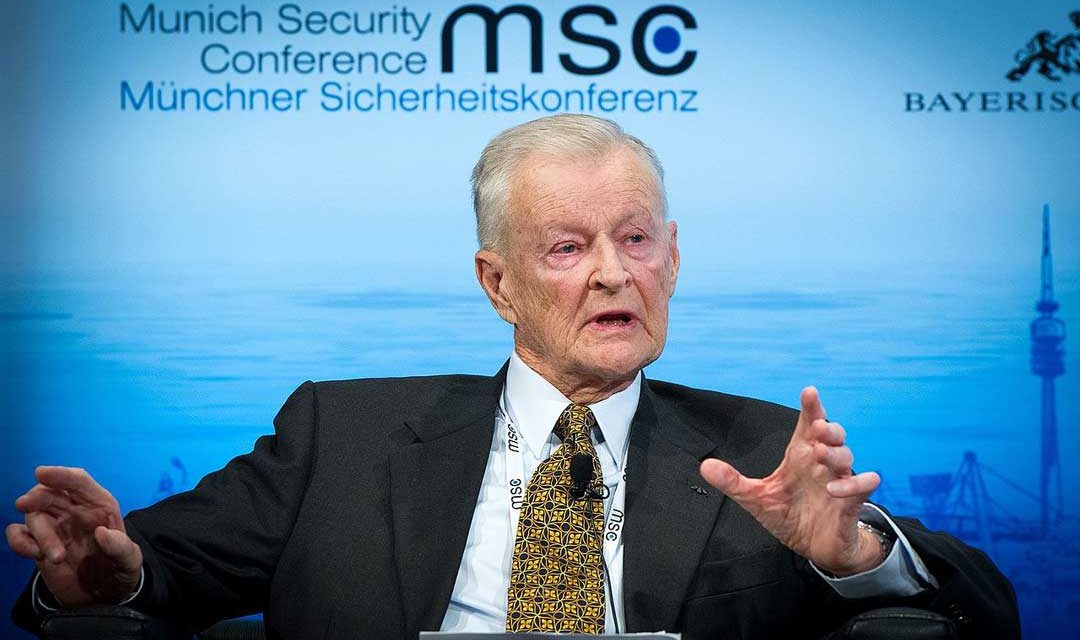 When it comes to Brzezinski’s legacy, I believe it to be mixed, his views becoming more prudent and sensible following the Cold War.

I never knew Zbigniew Brzezinski well, and was certainly not a friend, hardly an acquaintance; but we interacted on several occasions, directly and indirectly. We were both members of the Editorial Board of Foreign Policy magazine, founded in 1970, during its early years, which featured lively meetings every few months at the home of the founding co-Chair, a liberal banker named Warren Damien Manshel (the other founding co-Chair was his Harvard friend from graduate school, Samuel Huntington). I was a kind of outlier at these meetings, which featured several editors who made no secret of their ambition to be soon chosen by political leaders to serve at the highest levels of government. Other than Zbig the editor who flaunted his ambition most unabashedly was Richard Holbrooke; Joseph Nye should be included among the Washington aspirants, although he was far more discreet about displaying such goals.

In these years, Zbig was a Cold War hawk. I came to a lecture he gave at Princeton, and to my surprise while sitting quietly near the front of the lecture hall, Zbig started his talk by saying words to the effect, “I notice that Professor Falk is in the audience, and know that he regards me as a war criminal.” This was a gratuitous remark as I had never made such an accusation, although I also never hid my disagreements with Brzezinski’s anti-Soviet militancy that seemed unduly confrontational and dangerous. Indicative of this outlook, I recall a joke told by Zbig at the time: a general in Poland was asked by the political leader, when the country came under attack from both Germany in the East and the Soviet Union in the West, to which front he preferred to be assigned. He responded “Germany—duty before pleasure.”

In these years Zbig rose to prominence as the intellectual architect and Executive Director who together with David Rockefeller established The Trilateral Commission in 1973. The Trilateral Commission (North America, Western Europe, and Japan) was best understood as a global capitalist response to the Third World challenge being mounted in the early 1970s with the principal goal of establishing a new international economic order. Brzezinski promoted the idea that it was important to aggregate the capitalist democracies in Europe along with Japan in a trilateral arrangement that could develop a common front on questions of political economy. On the Commission was an obscure Georgia governor, Jimmy Carter, who seemed handpicked by this elite constellation of forces to be the Democratic Party’s candidate for president in 1976. It was natural for Brzezinski to be a foreign policy advisor to Carter during his campaign and then to be chosen as National Security Advisor (1977-1981) by President Carter.

My most significant contact with Brzezinski related to Iran Revolution during its last phases. In January of 1979 I accompanied Ramsey Clark and Philip Luce on what can best be described as a fact-finding visit in the last phases of the revolutionary ferment in the country. Toward the end of our time in Iran we paid a visit to the American Embassy to meet with Ambassador William Sullivan who understood that revolution was on the cusp of success and the Shah’s government was on the verge of collapse. What he told us was that the White House rejected his efforts to convey this unfolding reality, blaming Brzezinski for being stubbornly committed to saving the Shah’s regime, suggesting that Brzezinski’s friendship with the influential Iranian ambassador in Washington, Ardeshir Zahedi, apparently blinded him to the realities unfolding in Iran. It should be noted that Sullivan was no shrinking violent. Sullivan had a deserved reputation as an unrepentant counterinsurgency diplomat, whom General Westmoreland once characterized as more of a field marshal than a diplomat, given his belligerent use of the American embassy in Laos to carry out bombing attacks in the so-called ‘secret war.’

Less than a year later I was asked to accompany Andrew Young to Iran with the hope of securing the release of the Americans being held hostage in the embassy in Tehran. The mission was planned in response to Ayatollah Khomeini’s hint that he would favor negotiating the release of the hostages if the U.S. Government sent an African American to conduct the negotiations. Young, former ambassador to the UN, was the natural choice for such an assignment, but was only willing to go if the White House gave a green light, which was never given, and the mission cancelled. At the time, the head of the Iran desk in the State Department told me privately that “Brzezinski would rather see the hostages held forever than see Andy Young get credit for their release.” Of course, I have no way of knowing whether this was a fair statement or not, although this career bureaucrat spoke of his frustrating relationship with Brzezinski. Of course, there was never an assurance that if such a mission had been allowed to go forward, it would have been successful, but even in retrospect it seemed to warrant a try, and might have led to an entirely different U.S./Iran relationship than what has ensued over the past 38 years.

While attending a conference on human rights at the Carter Center a decade later, I had the good fortune to sit next to President Carter at dinner, and seized the opportunity to ask him about his Iran policy, and specifically why he accepted the resignation of Cyrus Vance who sought a more moderate response to Iran than was favored by Brzezinski. Carter responded by explaining that “Zbig was loyal, while Vance was not,” which evaded the question as to which approach might have proved more effective and in the end beneficial. It should be remembered, as was very much known in Tehran, that Brzezinski was instrumental in persuading Carter to call the Shah to congratulate him on his show of toughness when Iranian forces shot and killed unarmed demonstrators in Jaleh Square in an atrocity labeled “bloody Friday,” and seen by many in Iran as epitomizing the Shah’s approach to security and the Iranian citizenry.

It is against this background that I take note of Zbigniew Brzezinski’s death at the age of 89 by finding myself much more favorable to his role as foreign policy and world order commentator in recent years than to my earlier experiences during the Cold War and Iranian Revolution. It is natural to compare Brzezinski with Henry Kissinger, the other foreign-born academic who rose to the top of the foreign policy pyramid in the United States by way of the Council on Foreign Relations and the American establishment.

Kissinger was less eager than Brzezinski to defeat the Soviet Union than to create a stable balance, and even went so far as to anger the precursors of the alt-right by supporting détente and arms control during the Nixon years. Somehow, Kissinger managed to transcend all the ideological confusion in the United States to be still in 2017 courted and lionized by Democrats, including Hillary Clinton, and Republicans, including Donald Trump. Despite being frequently wrong on key foreign policy issues, Kissinger is treated as an iconic figure who was astonishingly able to impart nonpartisan wisdom on the American role in the world despite the highly polarized national scene.

Brzezinski never attained this status, and maybe never tried. Despite this unique position of eminence, Kissinger’s extensive writings on global trends in recent years never managed to grasp the emerging complexity and originality of world order after the collapse of the Soviet Union. His line of vision was confined to what could be observed by looking through a neo-Westphalian prism. From this perspective, Kissinger has been obsessed with China’s rise and how to reach a geopolitical accommodation with this new superpower so that a new statist balance of power with a global scope takes hold.

In my view, late Brzezinski developed a more sophisticated and illuminating understanding of the post-Cold War world than did Kissinger. While being sensitive to the importance of incorporating China in ways that were mutually beneficial, Brzezinski was also centrally focused on the non-geopolitical features of world affairs in the 21st century, as well as on the non-statist dimensions of geopolitics. In this regard, Brzezinski was convinced that the future world order would be determined by the outcome of competition among states for the control Eurasia, and that it was crucial for American political efforts to be calibrated to sustain its leadership role in this central arena of great power rivalry.

Brzezinski also appreciated that economic globalization was giving market forces a heightened significance that could not be adequately represented by continuing to rely on a state-centric frame of reference in crafting foreign policy. Brzezinski also recognized that a new political consciousness had arisen in the world that he associated with a global awakening that followed the collapse of European colonialism, and made the projection of hard power by the West much more problematic than in the past. This meant that the West must accept the need for consensual relations with the non-West, greater attentiveness to the interests of humanity, and an abandonment of hegemonic patterns of interaction, especially associated with military intervention. He also recognized the importance of emerging challenges of global scope, including climate change and global poverty, which could only be addressed by cooperative arrangements and collective action.

What impressed me the most about the late Brzezinski was his clarity about three central issues of American foreign policy. I will mention them only briefly as a serious discussion would extend this essay well beyond a normal reader’s patience.

Click here to learn more about FPJ editor Jeremy R. Hammond’s book Obstacle to Peace: The US Role in the Israeli-Palestinian Conflict.

I had not been very familiar with Brzezinski later views as expounded in several books: The Grand Chessboard: American Primacy and Geopolitical Imperatives (1997, reprinted with epilogue, 2012); (with Brent Scowcroft, America and the World: Conversations on the Future of American Foreign Policy (2009); Strategic Vision: America and the Crisis of Global Power (2012).

When it comes to Brzezinski’s legacy, I believe it to be mixed. He was a brilliant practitioner, always able to present his views lucidly, forcefully, and with a catchy quality of coherence. In my view, his Cold War outlook was driven toward unacceptable extremes by his anti-Soviet preoccupations. I believe he served President Carter poorly when it came to Iran, especially in fashioning a response to the anti-Shah revolutionary movement. After the Cold War he seemed more prudent and sensible, especially in the last twenty years, when his perceptions of world order were far more illuminating than those of Kissinger, his geopolitical other.

This article was originally published at RichardFalk.Wordpress.com.