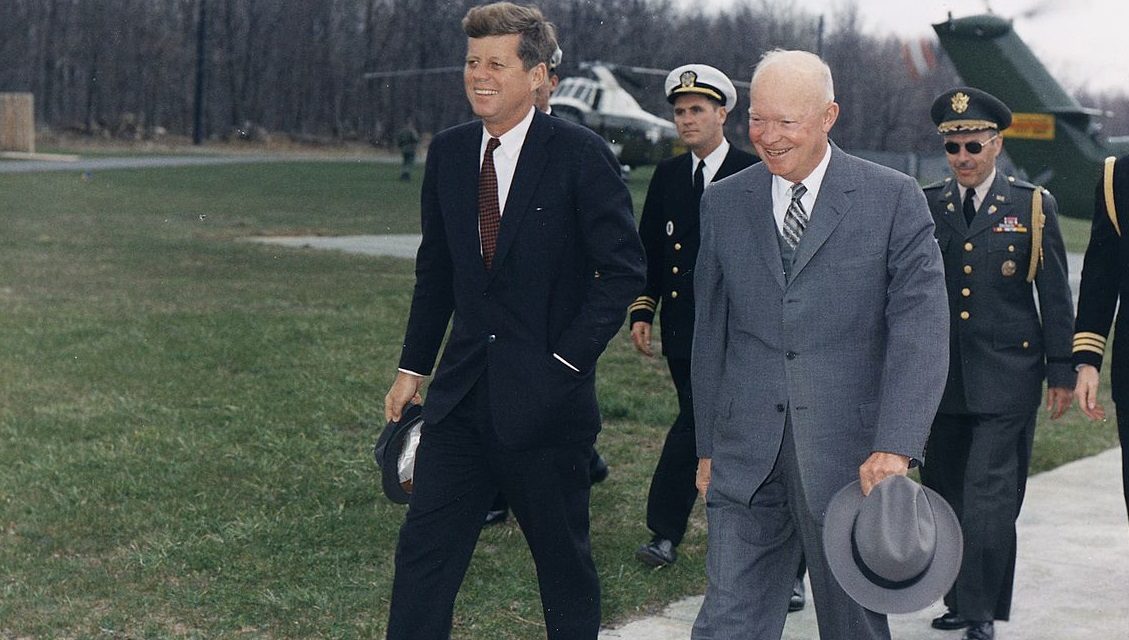 John F. Kennedy was assassinated because he posed a threat to the agenda of the military/security complex.

This Memorial Day, Monday, May 29, 2017, is the 100th birthday of John Fitzgerald Kennedy, the 35th President of the United States.

JFK was assassinated on November 22, 1963, as he approached the end of his third year in office. Researchers who spent years studying the evidence have concluded that President Kennedy was assassinated by a conspiracy between the CIA, Joint Chiefs of Staff, and Secret Service.

Kennedy entered office as a cold warrior, but he learned from his interaction with the CIA and Joint Chiefs that the military/security complex had an agenda that was self-interested and a danger to humanity. He began working to defuse tensions with the Soviet Union. His rejections of plans to invade Cuba, of the Northwoods project, of a preemptive nuclear attack on the Soviet Union, and his intention to withdraw from Vietnam after his reelection, together with some of his speeches signaling a new approach to foreign policy in the nuclear age convinced the military/security complex that he was a threat to their interests. Cold War conservatives regarded him as naive about the Soviet Threat and a liability to US national security. These were the reasons for his assassination. These views were set in stone when Kennedy announced on June 10, 1963, negotiations with the Soviets toward a nuclear test ban treaty and a halt to US atmospheric nuclear tests.

The Oswald coverup story never made any sense and was contradicted by all evidence including tourist films of the assassination. President Johnson had to cover up the assassination, not because he was part of it or because he willfully wanted to deceive the American people, but because to give Americans the true story would have shaken their confidence in their government at a critical time in US-Soviet relations. To make the coverup succeed, Johnson needed the credibility of the Chief Justice of the US Supreme Court, Earl Warren, to chair the commission that covered up the assassination. Warren understood the devastating impact the true story would have on the public and their confidence in the military and national security leadership and on America’s allies.

As I previously reported, Lance deHaven-Smith in his book, Conspiracy Theory in America, shows that the CIA introduced “conspiracy theory” into the political lexicon as a technique to discredit skepticism of the Warren Commission’s coverup report. He provides the CIA document that describes how the agency used its media friends to control the explanation.

The term “conspiracy theory” has been used ever since to validate false explanations by discrediting true explanations.

President Kennedy was also determined to require the Israel Lobby to register as a foreign agent and to block Israel’s acquisition of nuclear weapons. His assassination removed the constraints on Israel’s illegal activities.

Memorial Day is when Americans honor those in the armed services who died serving the country. JFK fell while serving the causes of peace and nuclear disarmament. In a 1961 address to the United Nations, President Kennedy said:

“Today, every inhabitant of this planet must contemplate the day when this planet may no longer be habitable. Every man, woman and child lives under a nuclear sword of Damocles, hanging by the slenderest of threads, capable of being cut at any moment by accident or miscalculation or by madness. The weapons of war must be abolished before they abolish us. It is therefore our intention to challenge the Soviet Union, not to an arms race, but to a peace race—to advance together step by step, stage by stage, until general and complete disarmament has been achieved.”

Kennedy’s address was well received at home and abroad and received a favorable and supportive response from Soviet leader Nikita Khrushchev, but it caused consternation among the warhawks in the Joint Chiefs of Staff. The US led in terms of the number of nuclear warheads and delivery systems, and this lead was the basis for US military plans for a surprise nuclear attack on the Soviet Union. Also, many believed that nuclear disarmament would remove the obstacle to the Soviet Army overrunning Western Europe. Warhawks considered this a greater threat than nuclear armageddon. Many in high military circles regarded President Kennedy as weakening the US viv-a-vis the Soviet Union.

The assassination of President Kennedy was an enormous cost to the world. Kennedy and Khrushchev would have followed up their collaboration in defusing the Cuban Missile Crisis by ending the Cold War long before the military/security complex achieved its iron grip on the US government. Israel would have been denied nuclear weapons, and the designation of the Israel Lobby as a foreign agent would have prevented Israel’s strong grip on the US government. In his second term, JFK would have broken the CIA into a thousand pieces, an intention he expressed to his brother, Robert, and the Deep State would have been terminated before it became more powerful than the President.

But the military/security complex struck first, and pulled off a coup that voided all these promises and terminated American democracy.