Water Security in the Middle East approaches the topic from a US-centric geopolitical perspective.

Unfortunately, it is a highly academic work, making it suitable probably only for the specific courses taught by the various authors. By highly academic, I signify that it is dry and jargonistic, not available to a broader public. The writing style is typical of the social sciences as outlined for essays given by instructors to first and second year students: introduction, preview, presentation, summation, and references.

The latter is seemingly the most important item, signifying that you have read many other papers and sources to support your point of view. While there are many strong references, the dryness of the writing styles would indicate that little firsthand research was done, that no one was actually talked to—neither politician, scientist, nor planner—in the various areas physically and socially discussed. 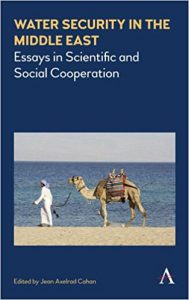 The whole work could well have been written in a much shorter summary form that highlighted the three main ideas present throughout the work. The first consistent idea is that water problems do not lead to wars, but serve as aggravating factors in wars and international relationships. Secondly, climate change is an important unknown factor for future considerations and planning. Finally, simply that people argue over water rights with little successful resolution. It all could have been done within a short essay and fewer references.

A larger fault, even if one can work through the quality of the writing, is the general—although not complete—lack of geopolitical information. What there is also assumes a U.S.-centric viewpoint. The first chapter, “Cooperation rules: insights on water and conflict from international relations”, clearly presents this shortcoming.

Patrice McMahon writes, “Anarchy and the absence of a world government mean that conflicts between states are inevitable and war always loom in the background.” Which says a lot without actually saying it: Whose “world government”? What conflicts are “inevitable” and looming?

Another generalized statement by Ms. McMahon again says a lot without saying it, as “war and violent conflict in general will be less likely to help states advance their interests….war is less cost effective than pursuing the same goal through cooperation and trade.” Which in my mind begs the question, why then does the U.S. maintain such a highly militarized state, with military corporations spread throughout its realm (Boeing, General Electric, Raytheon, McDonnell-Douglas, Lockheed-Martin, General Dynamics, et al) and then spend so much money and time fighting in the Middle East and supporting Israel’s fighting, rather than cooperating and trading? (Oh, I get it, they are the ones not cooperating and trading?)

This is followed up in her conclusion that “several states are in the process of imploding and disintegrating…[demonstrating] the profound fragility of this region as nation-states give way to a variety of substate actors.” So why are they imploding and disintegrating, why is the region so fragile? Could it be all the interference by the U.S. to support Israel and protect its dollar hegemony via Saudi Arabia?

In consideration of the above, the worst factor is the indication that the concerns over water allocation will “exacerbate regional tensions and distract countries from working with the United States on important policy objectives….and that the United States must be more assertive and expand cooperation with our international allies [NATO?] to bring about change and build resilience.” No, the U.S. is not part of the solution, at least not until they stop funding Saudi Arabia, stop supporting and funding Israel’s settlement of Palestine, and stop their indirect support of various “substate actors” commonly called terrorists.

There are a few other case specific faults that stood out. First is the reference to Syria’s “civil war” and its internationalization. Again, welcome the CIA, the Saudis, Israel, al-Qaeda and all kinds of state and “substate actors” that turned mostly civil demonstrations into violent ones that resulted in violent counter-reactions.

Another case is the single reference to Russia as playing a role in future water politics in the region. And that was all, he wrote. Understand that the essays were originally given at a conference in 2014, and Russia at that point had not yet stood up to ISIS (and indirectly U.S. geopolitical adventurism).

The final case, presented sparsely in three of the essays, is the relationship between Israel and the Palestinians. The most striking feature was the neutrality of two contesting “narratives” and that each side needs to listen to the other’s narrative. Sure, that has been done and is ongoing—especially from the Israeli perspective—in western MSM. The Israeli narrative is that of a lost people returning to the emptiness of their biblical homeland, as ordained by divine right. The reality is that of a colonial-settler state serving as an outpost of western dominance that is doing its best to ethnically cleanse the land of Arab/Palestinian people and culture.

Finally, to sum up, this is an economics treatise; it is not rocket science, nor is it actually any kind of science. I love to quote Michael Hudson (an economist) on this: “the discipline [of economics] is closer to numerology than to natural sciences. Indeed astrology also is highly technical and mathematical, and like economics it deals with forecasting.” (The Bubble and Beyond, 2013.)”