The Trump-Netanyahu Circus: Now, No One Can Save Israel from Itself 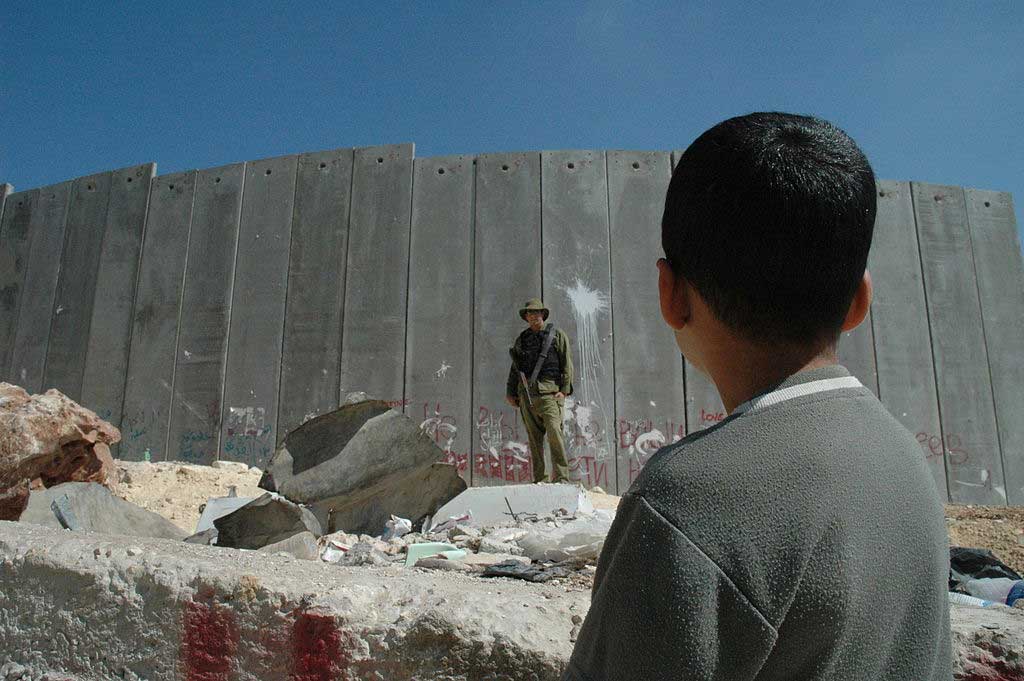 A Palestinian boy and an Israeli soldier by Israel's illegal separation wall in the West Bank. (Justin McIntosh/CC BY 2.0)

No wall can be high enough to stymie the echoes of oppressed people striving for freedom, human rights, equality and solidarity.

The President of the United States can hardly be taken seriously, saying much but doing little. His words, often offensive, carry no substance, and it is impossible to summarize his complex political outlook about important issues.

This is precisely the type of American presidency that Israeli Prime Minister, Benjamin Netanyahu, prefers.

However, Donald Trump is not just a raving man, but a dangerous one as well. His unpredictability must worry Israel, which expects from its American benefactors complete clarity and consistency in terms of its political support.

At the age of 70, Trump is incapable of being the stalwart, pro-Zionist ideologue in a way that suits Israeli interests well.

Take, for example, the White House press conference following the much anticipated visit by Netanyahu to Washington on February 15.

The visit was scheduled immediately after Trump’s inauguration on January 20, and is considered the Trump Presidency’s answer to what Israel wrongly perceives as a hostile US administration under former President Barack Obama.

However, Obama has granted Israel $38 billion over the course of ten years, estimated to be the most generous aid package in US history. He has supported all Israeli wars against Palestinians throughout his presidency, and unfailingly defended Israel before the international community, at the United Nations and every global forum in which Israel was justifiably criticized.

But Israel expects blind support. It needs a US administration that is as loyal as the US Congress, always praising Israel, degrading Palestinians, dismissing international law, calling to stop funding the UN for daring to demand accountability from Israel, feeding Israeli ‘security’ phobias with monetary and absolute political backing, demonizing Iran, undermining the Arabs and repeating all Israeli talking points fed to them by Tel Aviv and by the fifth column lobbyists in Washington.

Trump is striving to be that person, the messiah that Israel’s army of right-wing, ultranationalists and religious zealots have been calling for. But this appears beyond the man’s control, no matter how hard he tries.

“Looking at two-state or one-state, I like the one that both parties like. I’m very happy with the one both parties like. I can live with either one,” Trump said in answer to a journalist’s question, implying to Israel that the US will no longer impose solutions; instead, Trump pushed the ‘one-state solution’ idea to the very top of the discussion. It is not what Israel wanted—or expected.

In Washington, Netanyahu, with unmistakable pomposity, stood before the media and simply lied. He painted Israel as vulnerable, a prey for dark ‘radical Islam’ forces, ready to strike from every corner.

He presented Iran’s nuclear capabilities as if it is lined up to incinerate Israel, itself built atop the graves and villages of dispossessed Palestinians. No journalist had the courage to quiz the Israeli leader about his own country’s massive nuclear arsenal and other weapons of mass destruction. Listening to him preach fabricated history to the incurious American media, one would think that militarily powerful Israel is occupied by hostile Palestinian foreigners, and not vice versa.

Netanyahu claimed his people belonged to Palestine as the French belonged to France and the Chinese to China. But if European Jewish immigrants are the natives of Palestine, then what is one to make of Palestinians? How is one to explain their existence on land that has carried their collective name for millennia?

This is inconsequential to the US government and mainstream media. US media is as uninformed about the realities of the Middle East as Trump, who seems to have only two main talking points about the whole issue, both embarrassingly bizarre:

Israel has been treated ‘very, very badly’ by the US, and he has a ‘really great peace deal’ in store.

On the contrary, Palestinians have been treated ‘very, very badly’ by the US, the most generous supporter of Israel. Israel has used mostly American weapons in its wars against Palestinians and other Arab nations, with thousands of Palestinians losing their lives because of this blind American patronage.

As for his ‘really great peace deal,’ Trump has nothing. ‘Really great’ seems to be his answer to everything, to the point that his words are becoming ineffectual clichés, suitable for twitter jokes and comedy.

Furthermore, Netanyahu, urged on by—to quote former Secretary of State, John Kerry—the ‘most right-wing coalition in Israeli history’, wants the US to unconditionally support Israel as the latter is finalizing its future ‘vision’.

Israel’s president believes annexation is the answer. “I, Rubi Rivlin, believe that Zion is entirely ours. I believe the sovereignty of the State of Israel must be in all the blocs,” Rivlin said, emphasizing that he was referring to the entire West Bank, as quoted by the ‘Times of Israel’.

The consensus among Israel’s ruling class is that a Palestinian state should never be established. Trump, although incoherent, granted them just that.

So what does Netanyahu want? We know he does not want a Palestinian state and plans to annex all Jewish colonies, while continuing to expand over stolen Palestinian land. He wants Palestinians to exist, but without political will of their own, without sovereignty, forced to accept that Israel is a Jewish state (thus signing off on their historic right to their own land); to remain subdued, passive, disarmed, dehumanized.

But human dignity is not open for negotiation, no matter how a ‘good negotiator’ Netanyahu is—according to Trump’s assertion.

Palestinians have resisted Israel for nearly seventy years because they challenge their servitude. They will continue to resist.

Israel has the military means to punish Palestinians for their resistance, to push them behind military checkpoints and trap them behind walls. Yet, it is not a matter of firepower, and no wall can be high enough to stymie the echoes of oppressed people striving for freedom, human rights, equality and solidarity.

Netanyahu must feel triumphant because of Trump’s assuring words. The Israeli leader wants any victory, however illusive, to buy time and the allegiance of his camp of extremists, especially now that he is being investigated for fraud and is likely to be indicted.

He may even initiate a war against Gaza to create further distraction, and will readily spin facts so that his country is presented as a victim, to test American support and to ‘downgrade’ Hamas’ and other Palestinian groups’ defenses.

However, none of this will change the reality that Netanyahu has unwisely constructed. His vision for Israel is the perpetual subjugation of Palestinians through a system of racial discrimination that will continue until the world unravels the lies and the propaganda.

Having Trump by his side, Netanyahu will work diligently to perfect the Palestinian prison in the name of Israel’s security.

Palestinians must now respond, without the irrelevant rhetoric of a ‘two-state solution’, but with a unified universal message to the rest of the world: expecting—in fact, demanding—freedom, equality, full rights in a society that is not predicated on racial order, but on equal citizenship.

Israel has laid out its dark vision. Palestinians must present the antithesis to that destructive vision: a road map towards justice, equality and peace for all.