From MAD to Madness

Anyone who reads this book will clearly understand that ending the US's orchestrated conflict with Russia would be the greatest gift to humanity.

A book that Western peoples need to read is the just published by Clarity Press memoir of Paul H. Johnstone with an introduction by his daughter Diana, From MAD to Madness: Inside Pentagon Nuclear War Planning. 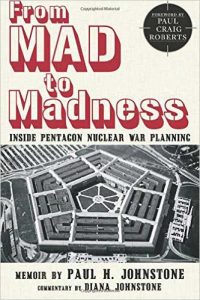 Paul Johnstone worked for two decades in the upper echelons of US intelligence—Air Force Intelligence, the Joint Chiefs of Staff, the Office of the Secretary of Defense—devising ways to estimate the military capabilities of potential enemies. The task of estimating the damage from nuclear war eventually brought the realization of the futility of nuclear warfare and the irrationality of war in the nuclear age. Nevertheless, this stark realization did not stop the preparation for nuclear war, which continues today.

One of the realities that emerges from the memoir is that doctrine is more convincing than evidence. Intelligence is formed from beliefs, so controlling beliefs is the key to intelligence.

Beliefs are controlled by those with the largest stake in them. The military/security complex, as President Eisenhower warned insouciant Americans, has a great stake in having an enemy whose motives can be misrepresented in the interest of budget and power.

Throughout the orchestrated Cold War, misrepresentation was the fact. When the Soviet Union collapsed, a new enemy had to be created—“Muslim terrorism.” This enemy proved to be an insufficient justification for a $1,000 billion dollar annual budget, so the “Russian threat” was recreated.

The problem with creating threats is that the threat can become a real one, in which case the price of power and profit for the military/security complex can be the nonexistence of life on earth.

Johnstone’s memoir explores the history of this double-edged sword. The rising tensions cultivated by the Clinton/Bush/Obama regime between the two major nuclear powers is the most irresponsible act of government in human history. Anyone who reads this book will clearly understand that whatever President Trump’s shortcomings, ending the orchestrated conflict with Russia would be the greatest gift to humanity.