The Paris Peace Conference: Signaling an End to a Western-dominated Era? 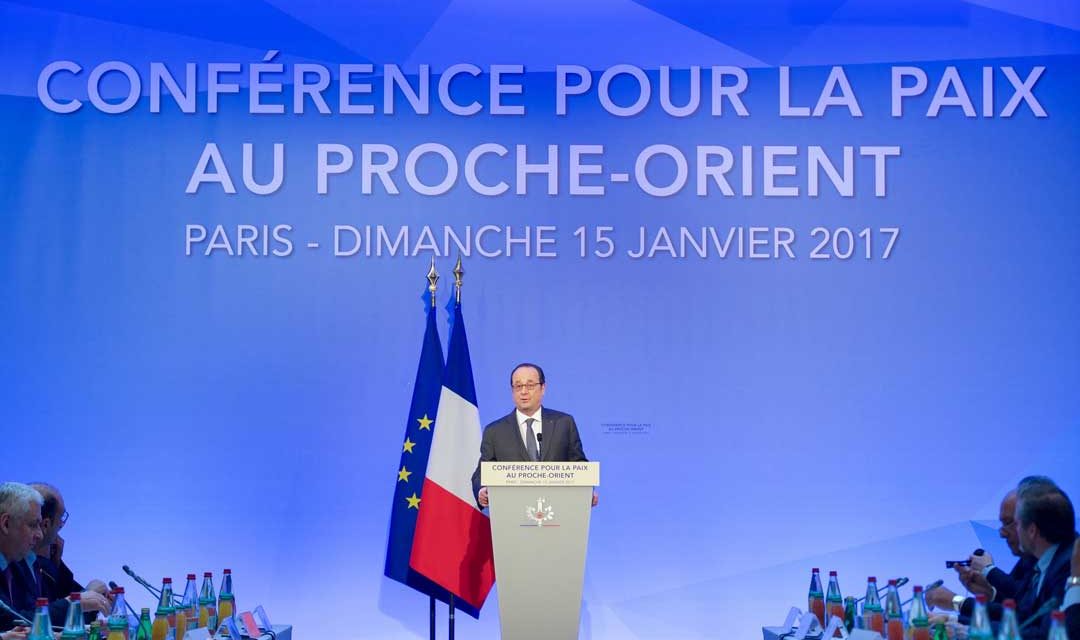 French President Francois Hollande addresses his guests on January 15, 2017, at the Ministry of Foreign Affairs Conference Center in Paris, France, at the outset of a French-hosted conference on Middle East peace attended by US Secretary of State John Kerry. (US State Department/Public Domain)

No, it was not just ‘another Middle East peace conference’, but marked the end of the US-led so-called ‘peace process’.

No, it was not just ‘another Middle East peace conference,’ as a columnist in the Israeli Jerusalem Post attempted to depict the Paris Peace Conference held on January 15, with top official representations from 70 countries attending. If it was, indeed, just ‘another peace conference’, representatives from the Israeli government and the Palestinian Authority (PA) would have attended as well.

Instead, it was a defining moment that we are likely to remember: as the one that has officially ended the peace process charade after 25 years.

In fact, if the Madrid Conference of October 1991 was the vibrant official start of peace talks between Israel and its Arab—including Palestinian—neighbors, the Paris talks of January 2016 was the sad termination of it.

As soon as the Madrid talks began, the positive energy and expectations that accompanied them began to fade. Even before the talks began, Israel had set political traps and erected obstacles. For example, refusing to deal directly with the Palestinian negotiations team led by the late Haidar Abdul-Shafi (since, as far as Israel was concerned, Palestinians did not exist), and even protested that negotiator Saeb Erekat was wearing the traditional Palestinian headscarf (kufiyah).

It has been 25 years since that initial meeting. Since then, several of the original Palestinian delegation members have passed away; others have aged while talking about peace, but with no peace in sight. The then young Erekat became the ‘chief negotiator’ of the PA, again, yet with nothing to talk about.

What is really left to be negotiated, when Israel has doubled its illegal settlements in the West Bank and East Jerusalem? When the number of Jewish settlers have grown from a negligible 250,000 (in 1993) to over 600,000; when the rate of Palestinian loss of land has accelerated like never before, since the war and occupation of 1967; when Gaza has been under lock and key for over 10 years, suffering from war, polluted water and malnourishment?

Yet, the Americans have persisted. They needed the peace process. It is an American investment, first and foremost, because American reputation and leadership depended on it.

“We are joined at the hip with Israel,” said Professor John Mearsheimer, co-author of the ‘Israeli Lobby’ in a recent interview. “What Israel does and how Israel evolves matters greatly for America’s reputation.”

Precisely. They persisted and failed, and they failed again and again, until the two-state solution (which was never a serious endeavor, to begin with) became a distant and, eventually, an impossible quest.

As Israel’s political center moved sharply to the right under the leadership of Prime Minister, Benjamin Netanyahu, the US maintained its position, as if oblivious to the fact that ‘facts on the ground’ have altered the political landscape beyond recognition.

Former President Barack Obama began his career in what some saw as an earnest push for renewed talks, which were halted or stalled during the administration of George W. Bush. He dispatched Senator George Mitchell, whose negotiations skills in 2010 to 2011 could not move Israel from its obstinate position on settlement expansion and, again, dispatched his Secretary of State, John Kerry, who tried unsuccessfully to revitalize talks between 2013 and 2014.

Obama must have, at one point, realized that the efforts were futile. For a start, Netanyahu seemed to have greater influence on the US Congress than the President himself. This is not an exaggeration. When Netanyahu clashed with Obama over the Iran nuclear deal, he snubbed the US President and gave a talk to a joint Congress in March 2015, in which he chastised Obama and the ‘bad deal’ with Iran. Obama appeared forlorn and irrelevant, as the representatives of the American people gave numerous standing ovations to a foreign leader, who boasted, yelled, assigned blame and praise.

Kerry’s nostalgic last speech in late December was an indication of that epic failure, the gist of his plea being that it was all over. However, both Kerry and Obama have no one to blame but themselves. Their administration had the political clout and the popular mandate to push Israel, and exact concessions that could have served as the basis of something substantial. They chose not to.

And now, an opportunistic real-estate mogul, Donald Trump, is the President of the United States. He comes with an eerie agenda that looks identical to that of the current Israeli government of right-wingers and ultra-nationalists.

“We have now reached the point where envoys from one country to the other could almost switch places,” wrote Palestinian Professor, Rashid Khalidi, in the ‘New Yorker‘:

So that’s it folks, the show is over. The era of the peace process is behind us, and early signs indicate that Palestinians, themselves, are now realizing it as they are clearly seeking alternatives to the various overbearing US administrations.

Indeed, several administrations under George Bush, Bill Clinton, George W. Bush and Obama have all contributed to the idea that peace was at hand, that Israel was willing to compromise, that pressure has to be applied (mostly on Palestinians) to end the seemingly equal ‘conflict’, that the US was a neutral party, even-handed ‘honest broker’, even.

The Israelis did not mind playing along as long as the game did not jeopardize their colonialization scheme in the Occupied Territories; the (largely unelected) Palestinian leadership joined in, seeking funds and meaningless political recognition; and the rest of the world, including the United Nations, watched from afar or played their assigned, marginal role.

But, now, Israel does not need to accommodate the rules of the game anymore, simply because the American ‘broker’, himself, has lost interest. Trump understands that his country can no longer maintain policing a unipolar world and has no interest in picking fights with regionally powerful Israel.

Although Trump began his presidential campaign promising to keep an equal distance from Palestinians and Israelis, only to then head in an extremely alarming direction—with the promise to move the US Embassy from Tel Aviv to Jerusalem thus, possibly, igniting another Palestinian uprising.

Knowing that the US is no longer an ally, so-called ‘Palestinian moderates’ are now seeking alternatives. On the day of Trump’s inauguration in an unprecedented lavish party seen as the most expensive in history, Palestinian factions were meeting, not in Washington, London or Paris, but in Moscow.

The news of an agreement that will see the admission of both Hamas and Islamic Jihad into the Palestine Liberation Origination (PLO) received little media coverage, but it was consequential, nonetheless. The timing (Trump’s inauguration) and the place (Moscow) were very telling of a changing political reality in the Middle East.

But what are we to make of the Paris Conference? It was a sad display of a final French-European-American attempt at showing relevance in a region that has vastly changed, in a ‘process’ that existed on paper only, in a political landscape that has become too complicated and diverse for the likes of Francois Hollande (an ardent supporter of Israel, to begin with) to matter in the least.

No, it was not just ‘another Middle East peace conference’, but an end of an era. The American era in the Middle East.