The Western Demonization of Muslims 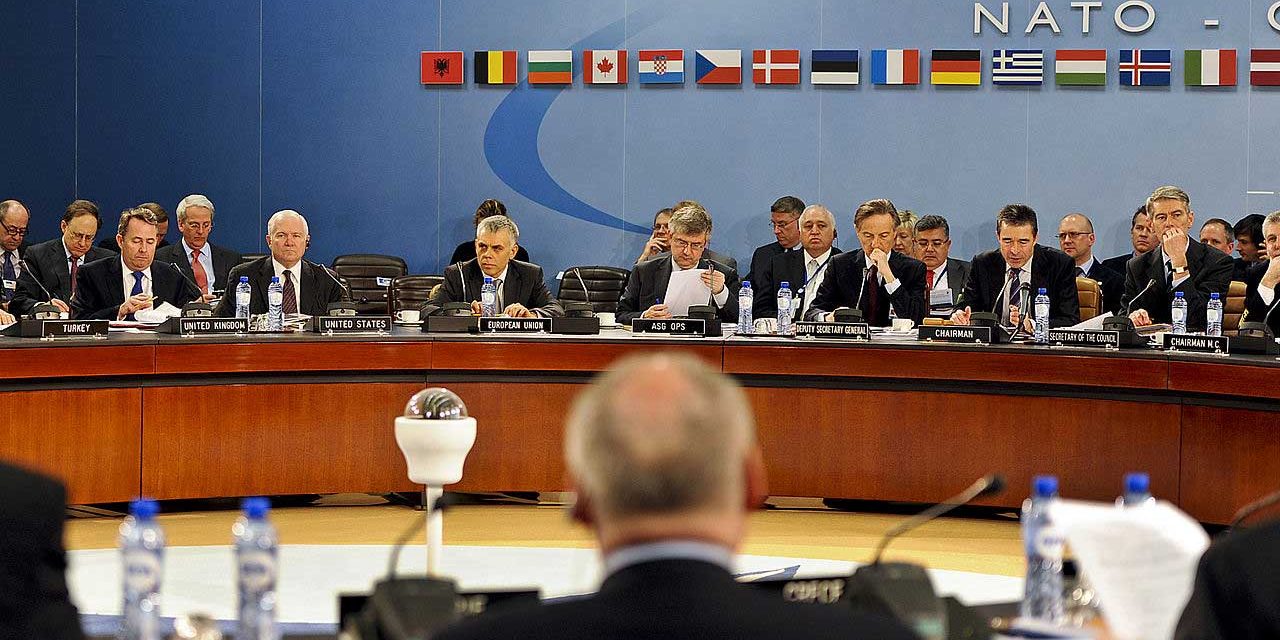 The first meeting for NATO Defense ministers at NATO headquarters in Brussels, Belgium, March 10, 2011. (US Department of Defense)

The foreign policy of the US and its Western allies is premised in large part upon prejudices against people of different race, ethnicity, or religion.

Western regimes have actively contributed to the complete destruction of Muslim states such as Iraq, Libya, Syria. We are gladly bombing their countries, but are shocked when they bomb us. Human rights apply to the Aryan and Caucasian race, while abuses against other races are of no consequence. This is how the Western, liberal democracy works. Just look at Libya.

One of the major problems with the current Western narrative is the racial mindset that chronically paints Westerners of Aryan or Caucasian decent as the inherently good and Muslim peoples, in particular, as the bandits of the world. The ongoing, well synchronized demonization of certain ethnic groups hides a deeply racist thinking with strong undertones of social-Darwinism, which is typical of traditional European thinking. Some ethnic groups are considered the bottom of the barrel of human development while we, the West, rank ourselves at the top as the enlightened society. We assume our manner of governance should reign throughout the world simply because we are the best in everything.

Arab countries are portrayed as poor and uncivilized, despite the fact that before the American invasions of country after country in the Middle East, oil rich Muslim countries were experiencing great economic development. Iraq in the 1980’s and Syria before the current disastrous war are good examples. The same is true for Libya prior to the brutal NATO backed military coup—it was Africa’s richest and most developed country according UN statistics. Most people in Western countries do not know this; hardly anyone in mainstream media writes about it. We rarely speak about the wealth of other cultures, but only about our own.

Current Hollywood films illustrate to the extreme the current problem of ethnic awareness in the West between those we like and those ethnicities we dislike. The American film industry has become a biased mouthpiece of USA’s racially aware power elite; the same tendency is a massive problem within mainstream media. Just about all films hit the screen with a surprising degree of propaganda with undertones of racist content and religious odium which obviously intend to vilify certain ethnic groups, Muslims in particular. The terrifyingly racist TV series Homeland is a good example of this kind of propaganda, with its constant derogatory words about nations we are not supposed to like, such as the Islamic Republic of Pakistan, Afghanistan, Iran, Israel, Syria, and Libya.

Note how viciously deliberate we use the negative term “regime” each time a nation is referred to when it is not Western enough, while we use the term “democratically elected government” to describe countries that mimic our ideology. Cultural intolerance and lack of respect for international law and nations’ sovereignty pervades the media vocabulary. The obvious aim is to influence the general Western population by coordinated stigmatization techniques. They are led to believe that people from Islamic nations are the terrible Muslims whom we should fear. This leads ordinary people to hate groups based on, in this case, racist Hollywood movies which seem to have been created in order to legitimize the US’s chronic need for wars in the Middle East.

The glorification of the white, Caucasian race in Hollywood movies, ends up whitewashing the West and its motives for war elsewhere in the world, while the truth is that we are the ones who are actively destroying Muslim states and causing Stalingrad situations in country after country. We are not even bothered when “we” bomb their countries, yet shocked when “they” bomb us.

The list of “regimes” and ethnic groups we don’t like is beginning to get frightfully long and includes many of the world’s nations: China, Brazil, Russia, Argentina, Singapore, the Philippines, India, Iraq, Libya, Iran, Syria. African countries are almost always deemed corrupt states with authoritarian presidents whom we hope to drag to the International Criminal Court (ICC) in the Hague as soon as possible. The hope is to have yet another black president sentenced for this or the other. No wonder presidents such as Yoweri Museveni in Uganda more or less calls the ICC a racist institution, deeming them “a bunch of useless people”. Museveni is completely right in his observations. The ICC chronically picks out black people for its interrogations; it is a complete and utter disgrace.

Never ever does the ICC bother to question the horrifying atrocities done by white Western leaders such as the NATO Secretary General, Jens Stoltenberg, when he was Prime Minister in Norway and helped launch the legally unjustified assault on Libya in 2011. This is how a Western, liberal democracy works. In ancient Greece, reprisals against incompetent leaders were used effectively and many sent into exile, never to return home, if they did not lead the city state well. In Western liberal democracy, reprisals against politicians are virtually non-existent, regardless of the injustice done or crimes committed against humanity. Human rights apply to the Aryan and Caucasian race, while abuses against other races are of no consequence.

Regarding corruption, which definitively is a problem in Africa, the exact same is true for many Western nations. Several hundred millions of dollars were given by Norway to the Clinton Foundation. Norway and Saudi Arabia topped the list of foreign nations’ support in 2015; still we only speak of Africans as the corrupt.  Norway’s Prime Minister Erna Solberg  has even uttered the unbelievable, that Norway does not regret any of its actions in 2011 that led to the destruction of Libya. To many of us, it is unbearable and most regrettable that a Prime Minister can utter something as stupid as this. Years after the 2011 Libya war, after years of civil strife and millions sent in exile to Egypt, Tunis, after seeing all of this, a Prime Minister like Solberg still maintains that she would have done exactly the same today as was done in 2011. No wonder there is Western decline, when people like this lead us, and function as convenient idiots to the ruthless American military complex.

We actually only send Serbians and Africans to the Hague. Western leaders of Caucasian descent are routinely exempt from answering for their crimes against humanity. A weeping “I’m sorry” on TV, such as the UK’s settlement with NATO atrocities in Libya where thousands of civilians lost their lives and the country was robbed and smashed to pieces is more than enough. Imagine the impact on civilian life. It is an unbearable injustice. Still, if President Obama utters the word “sorry”, all is well. No one of his friends intends to repay to Libya the billions and billions they owe Libyans due to the destruction NATO and the US inflicted upon that country.

It is probably the greatest robbery in history when the Libyan Treasury was emptied in 2011. Business Insider and many others have wondered where the 144 tons of gold from Libya’s vaults have gone. Where are the hundreds of billions of dollars in cash? What about the shares in various companies that were distributed internationally worth 150 billion dollars that came from Libya’s oil fund? Who took that money and assets?

As Europeans need to stop being the useful idiots of the American military complex and cynical elites in the United States. This gross racism and injustice against other nations must be stopped. Another example: the close cooperation between Saudi jihadists and the United States is by now sufficiently well documented. Leading Republicans such as John McCain have confirmed long ago that the United States, Qatar and Saudi Arabia financed the uprising against Assad, according to Wall Street Journal. He told the world about it himself, proud of being the one who pushed for this complete breach of international law.

The case is very ugly. The 2011 leader of Al Qaeda in Libya, Abdelhakim Belhadj, was hailed by John McCain and other Americans as a collaborator and champion of freedom following NATO’s military coup. In January of 2015, the same Belhadj took charge of ISIS in Libya, the same man who was the United States’ ally in 2011. ISIS currently runs the human trafficking in the region, from which millions of people are making their way to Europe, due to the total breakdown of the Gaddafi government.

WikiLeaks further revealed that Hillary Clinton was fully aware that two best allies of the United States, Qatar and Saudi Arabia, were funding ISIS at a governmental level. What are America’s underlying motives for promoting cooperating with Al Qaida to overthrow Gaddafi and later supporting ISIS leaders in Libya? Are groups like ISIS religious Muslim at all? Or only paid mercenaries? The point being: why such fierce dislike of Muslims in mainstream media and Hollywood narratives when the jihadists in question are the US and NATO allies in the Middle East?

We read about Syrian Christians who quote the Bible when they are stopped by ISIS soldiers in Syria when told to quote from the Quran. Whereupon the jihadists simply nod and let them go. These men do not even know their Quran. We hear reports from Egypt, Libya and Syria telling how ISIS soldiers speak poor Arabic and are foreigners. The same is stated in the documentary “ISIS versus Christ”, where Egyptian imams were interviewed in the wake of the beheading by ISIS of 21 Coptic Christians in Libya.

ISIS obviously have extremely good friends in the West. The terror group was given an impressively coordinated ringside seat in almost every single Western mainstream media outlet the very second they entered the world stage, with American weaponry of every kind. Back to my main point: who is profiting from the demonization of Islam and the destruction of oil-rich Muslim states? This should be of interest to Europeans, especially when one considers the important role ISIS is playing in the current export of refugees—most of whom arrive with fake Syrian passports and are illegally in Europe, and emigrate for economic reasons from the faltering states in Africa.

Who is profiting from the destabilization of Europe? Somebody should be smart and get a hold of Saif al-Islam Gaddafi and reinstate him as the unifying leader of Libya, and this human trafficking which is plaguing Europe would end and order and justice be reinstated. As we all recall, Muammar Gaddafi had an agreement with Italy to control from the Libyan side the illegal influx of immigrants to Europe. This agreement broke down when NATO attacked the nation.

The endless media reports that portray other peoples as “bandits and terrorists” from “cruel regimes and tyrannical heads of state” is something many of us have grown tired of. The infantile role of ideological journalists then becomes to explain to us who the United States considers good or who we are to believe is the bad in the world.

Public uprisings like UK Brexit and the people’s choice of Donald Trump—who openly voices to stop the conflicts with Russia and US engagement in wars in the Middle East—comes as refreshing movements against the outdated Western, social Darwinist power elites who constantly push for more war. The massive danger of one-sided propaganda in both Hollywood and the media being its ability to legitimize war against those “we define as bad”, which benefits not the Western people, but only the economic interests of the current power elites. Oliver Stone’s excellent film about Edward Snowden thus becomes a refreshing breath of clean air. Finally, a Hollywood movie that actually points an accusing finger at powerful elites in the United States. They definitely deserve it.