The Insane Circus Now Going on in Washington 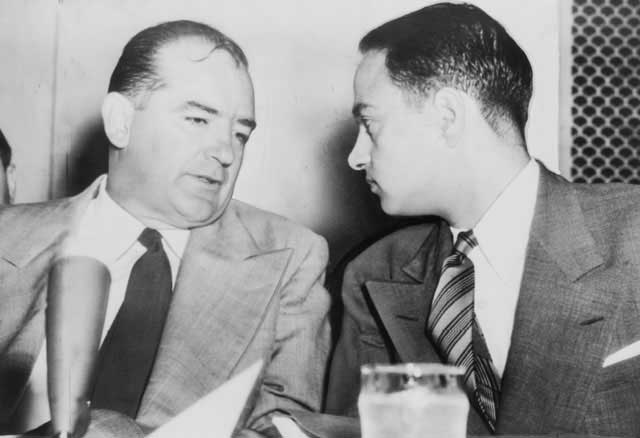 Sen. Joseph McCarthy chats with his attorney Roy Cohn during Senate Subcommittee hearings on the McCarthy-Army dispute, 1954 (Library of Congress)

The insane circus in Washington is a sad parody of Joseph McCarthy waving fistfuls of blank paper, insisting they were lists of Russian spies.

The single most important point to keep in mind about the “Russians did it” three-ring circus underway in Washington—after the essential fact that still no proof has been provided to support accusations coming from the highest level—is that there is no issue around the contrived notion of interfering in an American election or endangering American security. None.

What essentially happened in this leak of private information—yes, I think it was leak, not a case of hacking—was that personal conversations of a highly embarrassing nature were released to the public.

That is not a crime against the state. That is not a matter of national security. And that is not interference in a country’s election. Those are all stupidly false issues even to raise here.

This is the sort of information that gossip columnists or investigative reporters or authors of tell-all books have always been ready to provide the public.

No such reporter or writer is regarded as a spy. None of them is viewed as an agent of a foreign power. But, of course, they are very much resented by the people hurt or embarrassed by the information they provide.

So, we have a double fraud here being perpetrated, right before our eyes, at the highest level in America.

The first fraud is the deliberately dishonest notion that the release of private gossip in any way represented interference in an election.

The second fraud is the unproven assertion that Russia was somehow responsible for obtaining the information.

My mind is not closed to any possible truth here; I do not pre-judge and assert that we are being showered with falsehoods by Obama and his servants, although I do believe that is what is close to certain.

And I believe that it is close to certain because my instincts tell me strongly that when someone makes strong accusations and provides no believable proof, the accusations are almost certainly false, and, as a matter of principle, they should be regarded as false.

This goes double when the accusations are dressed up in strikingly dishonest language—the kind of language beloved by a lowlife politician like John McCain or a demonstrated reckless-tongued and prejudiced anti-Russian bureaucrat such as James Clapper—language, delivered with theatrically somber tones and faces, about interfering in America’s democracy. Incidentally, Clapper’s disgraceful characterization of Assange as a pedophile exactly mimics the empty accusations of sexual perversion old Joseph McCarthy used to level at some of his targets.

Gossip is not interfering in democracy. It is just information people may weigh when they vote, just as valid or not as any other information available. Indeed, its information value to each voter is privately weighed against empty campaign slogans and an avalanche of truly false news provided by an utterly-biased corporate press in the last election. Voters were arguably better informed than in a long time.

What a tiresome circus Washington has become with this matter. All these well-paid officials asserting this or that, carrying on with speeches and committees, and concocting completely unconvincing proof. Meanwhile the nation is absolutely jammed with serious problems receiving no attention. That fact alone tells you more than you may want to know about America’s political establishment.

And all of the circus is because the insanely ambitious Hillary Clinton cannot accept that she is not widely liked and was defeated for that simple reason.

And all because the Democratic Party, married tightly and corruptly to the Clintons as its biggest source of money for years, cannot accept that it ran the wrong candidate.

And all because the Chairman of Hillary’s disastrous campaign, John Podesta, cannot face the embarrassingly stupid fact of his own utter carelessness, his computer password having been “password.”

As Julian Assange has said, a 14-year old could have hacked Podesta’s computer easily. And may we not ask, if what the password guarded was indeed so precious, why wouldn’t this man be considered the chief guilty party for his negligence?

And also, finally, because one of the most disappointing presidents in American history, a man who has failed at most of what he has attempted except at mass killing and displaying extreme arrogance, Obama, viscerally dislikes Vladimir Putin for besting him in Ukraine and in Syria.

He is also miffed and embarrassed that his ridiculous crisscrossing of the country in Air Force One, at public expense for a private purpose, failed to elect Hillary.

He is even further resentful at the lost prospect of being appointed to the Supreme Court by Hillary, something there is every reason to believe she promised him.

As for pretentious appointed hacks like James Clapper, well, the entire history of what I like to call Big Intelligence is littered with their fraudulent claims and failed projects.

There hasn’t been a significant American war in which Big Intelligence didn’t play a role of first concocting “evidence,” the kind of stuff that would be thrown out of any court of law but which serves just fine to assist politicians in temporarily bamboozling the public.

Readers may be interested in the fact of Obama’s unusually cozy relationship with the Pentagon—yes, the Obama of the Peace Prize and people’s 2008 hopes and the big smile and the baritone voice, but also the Obama of all the killing and arrogance and abject failure.

He is their man.