Michael Flynn Should Remember Truths He Blurted Out Last Year 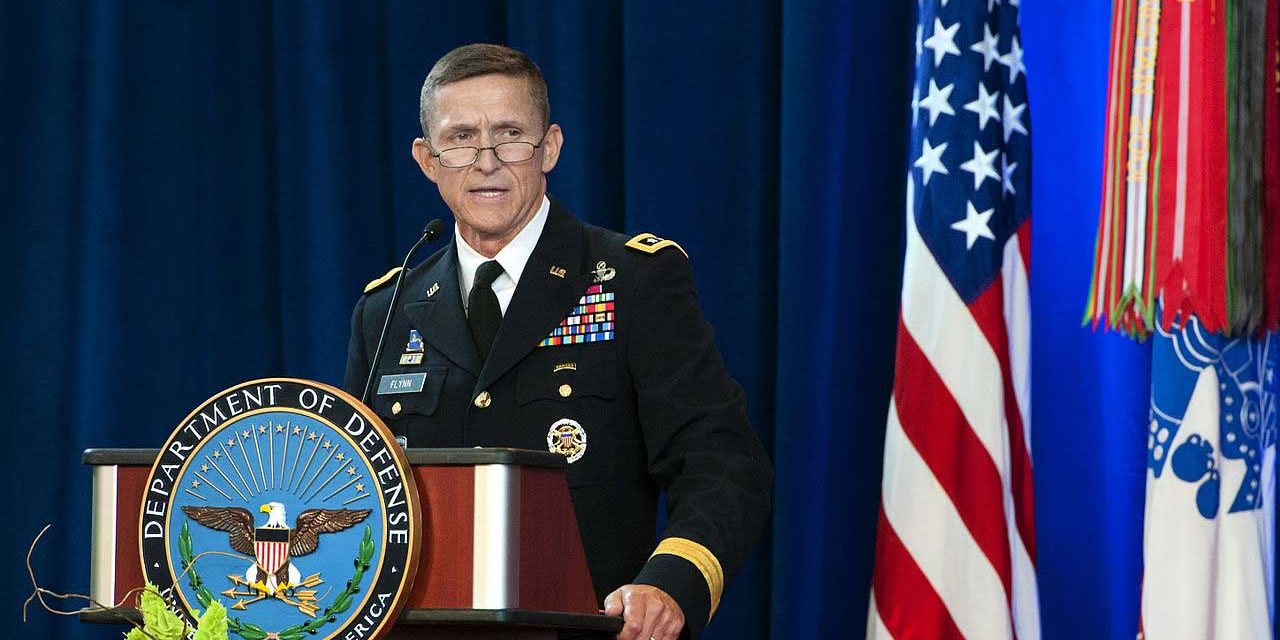 Army Lt. Gen. Michael T. Flynn speaks in Washington, DC, July 24, 2012, on the occasion of his takover of directorship of the Defense Intelligence Agency (DIA). (US Department of Defense)

“Lt. Gen. Flynn, who since leaving the DIA has become an outspoken critic of the Obama administration, charges that the White House relies heavily on drone strikes for reasons of expediency, rather than effectiveness. ‘We’ve tended to say, drop another bomb via a drone and put out a headline that “we killed Abu Bag of Doughnuts” and it makes us all feel good for 24 hours,’ Flynn said. ‘And you know what? It doesn’t matter. It just made them a martyr, it just created a new reason to fight us even harder.'”

Or even more clearly:

Will Flynn then advise Trump to cease dropping bombs from drones? Or will he go ahead and advise drone murders, knowing full well that this is counterproductive from the point of view of anyone other than war profiteers?

From the same report:

“Asked . . . if drone strikes tend to create more terrorists than they kill, Flynn . . . replied: ‘I don’t disagree with that,’ adding: ‘I think as an overarching strategy, it is a failed strategy.'”

So Trump’s almost inevitable string of drone murders will be conducted under the guidance of a man who knows they produce terrorism rather than reducing it, that they endanger the United States rather than protecting it. In that assessment, he agrees with the vast majority of Americans who believe that the wars of the past 15 years have made the United States less safe, which is the view of numerous other experts as well.

Flynn, too, expanded his comments from drones to the wars as a whole:

“What we have is this continued investment in conflict. The more weapons we give, the more bombs we drop, that just… fuels the conflict. Some of that has to be done but I am looking for the other solutions.”

Flynn also, like Trump, accurately cites the criminal 2003 U.S. invasion of Iraq as critical to the creation of ISIS:

“Commenting on the rise of ISIL in Iraq, Flynn acknowledged the role played by the US invasion and occupation of Iraq. ‘We definitely put fuel on a fire,’ he told Hasan. ‘Absolutely… there is no doubt, history will not be kind to the decisions that were made certainly in 2003. Going into Iraq, definitely… it was a strategic mistake.”

So there will be no advice to make similar strategic mistakes that are highly profitable to the weapons industry?

Flynn, despite perhaps being a leading advocate of lawless imprisonment and torture, also admits to the counterproductive nature of those crimes:

“The former lieutenant general denied any involvement in the litany of abuses carried out by JSOC interrogators at Camp Nama in Iraq, as revealed by the New York Times and Human Rights Watch, but admitted the US prison system in Iraq in the post-war period ‘absolutely’ helped radicalise Iraqis who later joined Al Qaeda in Iraq (AQI) and its successor organisation, ISIL.”

Recently the International Criminal Court teased the world with the news that it might possible consider indicting US and other war criminals for their actions in Afghanistan. One might expect all-out resistance to such a proposal from Trump and his gang of hyper-nationalist war mongers, except that . . .

“Flynn also called for greater accountability for US soldiers involved in abuses against Iraqi detainees: ‘You know I hope that as more and more information comes out that people are held accountable… History is not going to look kind on those actions… and we will be held, we should be held, accountable for many, many years to come.'”

Let’s not let Flynn forget any of these words. On Syria he has blurted out some similar facts to those Trump has also articulated:

“Publicly commenting for the first time on a previously-classified August 2012 Defense Intelligence Agency (DIA) memo, which had predicted ‘the possibility of establishing a declared or undeclared Salafist principality in Eastern Syria (…) this is exactly what the supporting powers to the opposition want’ and confirmed that ‘the Salafists, the Muslim Brotherhood, and [Al Qaeda in Iraq] are the major forces driving the insurgency in Syria,’ the former DIA chief told Head to Head that ‘the [Obama] Administration’ didn’t ‘listen’ to these warnings issued by his agency’s analysts. ‘I don’t know if they turned a blind eye,’ he said. ‘I think it was a decision, I think it was a willful decision.'”

Let that sink in. Flynn is taking credit for having predicted that backing fighters in Syria could lead to something like ISIS. And he’s suggesting that Obama received this information and chose to ignore it.

Now, here’s a question: What impact will “bombing the hell” out of people have? What good will “killing their families” do? Spreading nukes around? “Stealing their oil”? Making lists of and banning Muslims? Is it Flynn’s turn to willfully ignore key facts and common sense in order to “advise” against his better judgment a new president who prefers to be advised to do what he was going to do anyway?

Or can Flynn be convinced to apply lessons learned at huge human cost to similar situations going forward even with a president of a different party, race, and IQ?