Public vs. Media on War 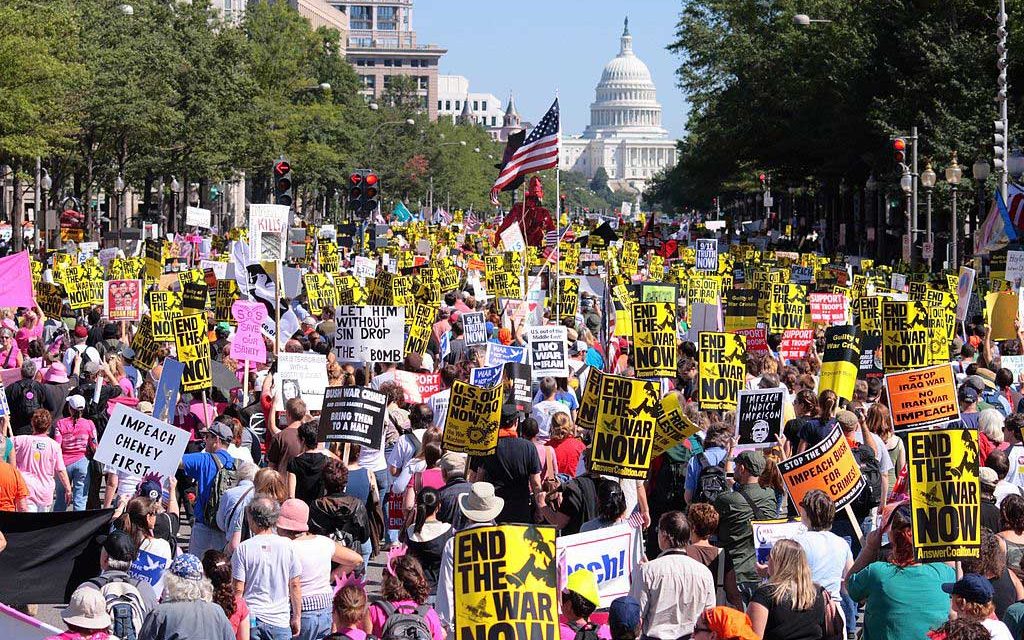 Despite the media's best efforts to delude the masses, most Americans still think US foreign policy and its endless wars make the country less safe.

A new poll from an unlikely source suggests that the U.S. public and the U.S. media have very little in common when it comes to matters of war and peace.

This poll was commissioned by that notorious leftwing hotbed of peaceniks, the Charles Koch Institute, along with the Center for the National Interest (previously the Nixon Center, and before that the humorously named Nixon Center for Peace and Freedom). The poll was conducted by Survey Sampling International.

They polled 1,000 registered voters from across the U.S. and across the political spectrum but slanted slightly toward older age groups. They asked:

“Over the last 15 years, do you think U.S. foreign policy has made Americans more or less safe?”

What, dear reader, do you say?

Well, at least all these humanitarian wars to spread democracy and eliminate weapons and destroy terror have benefited the rest of the world, right?

Not according to the statistics that show terrorism on the rise during the war on terrorism, and not according to 50.5% of poll respondents who said U.S. foreign policy has made the world less safe. Meanwhile 12.6% said “more safe” while 24.1% said it was about the same and 12.8% didn’t know.

These answers should not immediately be taken to prove that the U.S. public is universally wise and well informed, and (not coincidentally) at odds with U.S. media. Not only is that margin pretty slim on ISIS, but 43.3% of those polled said ISIS was the greatest threat the United States faces. Meanwhile 14.1% named Russia, 8.5% North Korea, 8.1% the national debt, 7.9% domestic terrorists, and bringing up the rear with the correct answer of global warming as the greatest threat were a grand total of 4.6% of those polled.

A survey of U.S. news reports would certainly suggest a point of agreement here between the public and the media. But here is where it gets interesting. Although the public believes the hype about danger emanating from these foreign forces, it does not favor the solution it is endlessly offered by the media and the U.S. government. When asked if, compared to last 15 years, the next president should use the U.S. military abroad less, 51.1% agreed, while 24.2% said it should be used more. And 80.0% said that any president should be required to get congressional authorization before committing the U.S. to military action, while 10.2% rejected that radical idea that’s been in the U.S. Constitution since day 1.

The U.S. public may look quite depressingly ignorant in a quick survey of Youtube videos, but check this out: Asked if the U.S. government should deploy U.S. troops on the ground in Syria 51.1% said no, compared to 23.5% who said yes. Only 10% said yes on Yemen, while 22.8% said no—however, 40.7% said the U.S. government should keep “supporting” Saudi Arabia in that war.

This moderately encouraging survey of public sentiment stands in stark contrast to U.S. media coverage of wars in general and Syria in particular. The New York Times’ Nicholas Kristof is ready for a bigger war as are columnists in the Washington Post and USA Today, as well as, of course Chuck Todd and other televised talking head. Meanwhile Hillary Clinton’s comment to Goldman Sachs that a “no fly zone” would require “killing a lot of Syrians” has received dramatically less press than her brave calls for creating a humanitarian no fly zone, and the steady depiction of that proposal as “doing something”—in contrast to the only other option: “doing nothing.”

The public, however, rejects the only “something” that’s on offer and just might leap at the opportunity to try something else, if anyone ever proposed anything else.