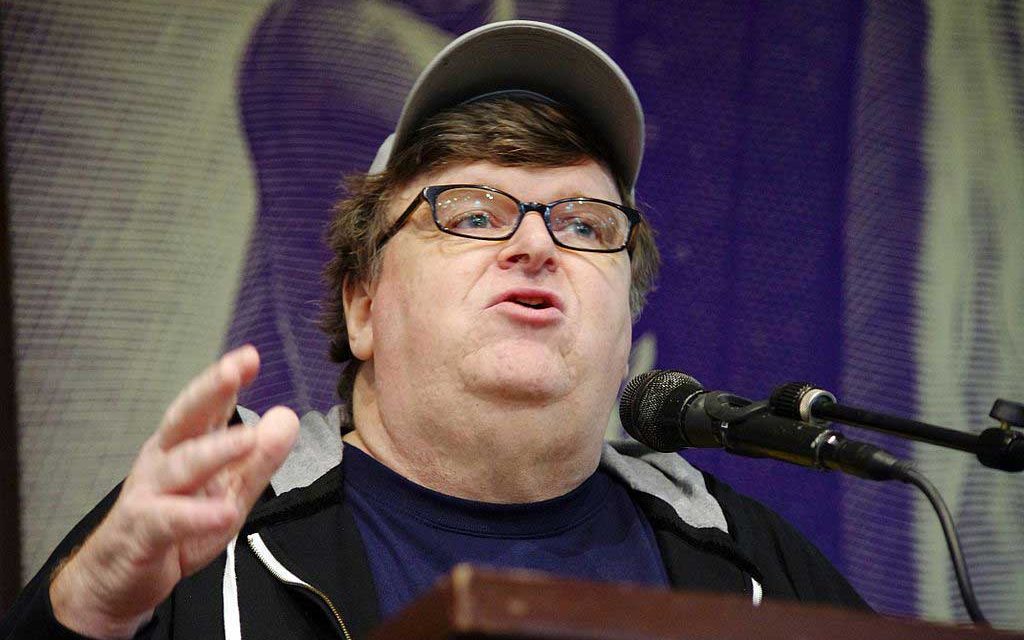 Michael Moore’s “Trumpland” is a textbook illustration of how the mindset of voting for “the lesser evil” just results in self-delusion—and ever more evil.

Michael Moore has made some terrific movies in the past, and Where to Invade Next may be the best of them, but I expected Trumpland to be (1) about Trump, (2) funny, (3) honest, (4) at least relatively free of jokes glorifying mass murder. I was wrong on all counts and would like my $4.99 back, Michael.

This film is a text book illustration of why rational arguments for lesser evilist voting do not work. Lesser evilists become self-delusionists. They identify with their lesser evil candidate and delude themselves into adoring the person. Moore is not pushing the “Elect her and then hold her accountable” stuff. He says we have a responsibility to “support her” and “get behind her,” and that if after two years—yes, TWO YEARS—she hasn’t lived up to a platform he’s fantasized for her, well then, never fear, because he, Michael Moore, will run a joke presidential campaign against her for the next two years (this from a guy who backed restricting the length of election campaigns in one of his better works).

Moore maintains that virtually all criticism of Hillary Clinton is nonsense. What do we think, he asks, that she asks how many millions of dollars you’ve put into the Clinton Foundation and then she agrees to bomb Yemen for you? Bwahahaha! Pretty funny. Except that Saudi Arabia put over $10 million into the Clinton Foundation, and while she was Secretary of State Boeing put in another $900,000, upon which Hillary Clinton reportedly made it her mission to get the planes sold to Saudi Arabia, despite legal restrictions—the planes now dropping U.S.-made bombs on Yemen with U.S. guidance, U.S. refueling mid-air, U.S. protection at the United Nations, and U.S. cover in the form of pop-culture distraction and deception from entertainers like Michael Moore.

Standing before a giant Air Force missile and enormous photos of Hillary Clinton, Michael Moore claims that substantive criticism of Clinton can consist of only two things, which he dismisses in a flash: her vote for a war on Iraq and her coziness with Wall Street. He says nothing more about what that “coziness” consists of, and he claims that she’s more or less apologized and learned her lesson on Iraq.

What? It wasn’t one vote. It was numerous votes to start the war, fund it, and escalate it. It was the lies to get it going and keep it going. It’s all the other wars before and since.

Moore parts company from substantive critique in order to lament unproven rightwing claims that Hillary Clinton has murdered various people. “I hope she did,” screams Moore. “That’s who I want as Commander in Chief!” Hee hee hee.

Then Moore shamelessly pushes the myth that Hillary tried to create single-payer, or at least “universal” healthcare (whatever that is) in the 1990s. In fact, as I heard Paul Wellstone tell it, single-payer easily won the support of Clinton’s focus group, but she buried it for her corporate pals and produced the phonebook-size monstrosity that was dead on arrival but reborn in another form years later as Obamacare. She killed single-payer then, has not supported it since, and does not propose it now. (Well, she does admit in private that it’s the only thing that works, as her husband essentially blurts out in public.) But Moore claims that because we didn’t create “universal” healthcare in the 1990s we all have the blood of millions on our hands, millions whom Hillary would have saved had we let her.

Moore openly fantasizes: what would it be like if Hillary Clinton is secretly progressive? Remember that Moore and many others did the exact same thing with Obama eight years ago. To prove Clinton’s progressiveness Moore plays an audio clip of her giving a speech at age 22 in which she does not hint at any position on any issue whatsoever.

Mostly, however, Moore informs us that Hillary Clinton is female. He anticipates “that glorious moment when the other gender has a chance to run this world and kick some righteous ass.” Now tell me please, dear world, if your ass is kicked by killers working for a female president will you feel better about it? How do you like Moore’s inclusive comments throughout his performance: “We’re all Americans, right?”

Moore’s fantasy is that Clinton will dash off a giant pile of executive orders, just writing Congress out of the government—executive orders doing things like releasing all nonviolent drug offenders from prison immediately (something the real Hillary Clinton would oppose in every way she could).

But when he runs for president, Moore says, he’ll give everybody free drugs.