Samantha Nutt in her book Damned Nations describes a root cause of war that the wealthy of the world could easily eliminate.

Samantha Nutt has spent decades working on humanitarian aid in war zones. Her book, Damned Nations: Greed, Guns, Armies, and Aid, is rich in wisdom drawn from experience. But more powerful and pointed, and worth beginning and ending with, is her talk titled “The Real Harm of the Global Arms Trade.” 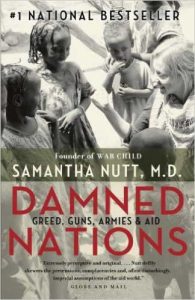 Nutt describes child armies across the global south including eight-year-olds who have never been to school but have fought and killed using automatic weapons. Yet, she says, war can be ended despite its being “as old as existence.” (I think part of the path to ending it may involve rejecting myths like the one that war is as old as existence, but never mind that.)

Nutt describes a root cause of war that the wealthy of the world could easily eliminate, because it’s not found in the “human nature” of Africans but in the financial records of educated, well-off, comfortable people typically not involved in war directly.

Nutt shows two maps of the world, one highlighting the locations of wars, the other the locations of the big weapons exporters. There’s no overlap. Like alcohol for Native Americans and opium for Chinese, weapons of war are products that the United States and Europe (and Russia and China) push on targeted populations. Eighty percent of all war weapons, Nutt says, come from the five permanent members of the U.N. Security Council plus Germany.

So, Nutt concludes, what we need is “transparency” in arms sales. Ignore that bit. I know that even transparency is too much to ask of the U.S. government, but that doesn’t make it an appropriate demand. What we need is an end to weapons gifts and weapons sales. Everybody knows the U.S. is selling Saudi Arabia weapons with which to blow people up in Yemen, boost terrorism, and destabilize the region. Knowing it doesn’t help anything. And stopping it wouldn’t make a single other weapons sale or gift to a single other nation, or to Saudi Arabia next month, morally defensible. There’s no proper way to deal arms.

So, if you live in the United Kingdom, make Jeremy Corbin your prime minister. And if you live in any other wealthy northern country, bring nonviolent pressure to bear on your society and your rotten government to end the arms trade. If we can divest from Israeli war crimes and nukes, we can divest from the overarching evil, which is war. Nutt also suggests weapons divestment in her book, along with numerous suggestions for improving and expanding humanitarian aid.

Antiwar and pro-aid activists need to work more closely together. Antiwar groups need Nutt’s wisdom on where to best direct aid. Nutt, in my humble opinion, could use a bit more understanding of what’s wrong with war. That sounds ridiculous for me to say from the safety of my home as she travels from war zone to war zone, but citing six million Jews as the greatest killing ever done by war misses the problem. And I don’t mean by omitting the three million non-Jews killed in the camps (though why omit them?). I mean the 50 million or more killed in the war outside the camps, a war justified in U.S. mythology by the deaths of the Jews, despite the U.S. and U.K. governments’ refusals to evacuate them or accept them as refugees.

Perpetuating World War II myths in an antiwar book for Americans is as ill-advised as any of the counterproductive amateur attempts at aid that Nutt critiques. (Never mind the reduction by tenfold of the number of Iraqis killed since 2003 in the statistic Nutt uses, or her repetition of the “erase the state of Israel from the map” line/lie, or her claim that arming Paul Kagame is an example of good weapons proliferation, or her claim that we couldn’t know Iraq had no nukes or chemical or biological weapons until years after 2003.)

Nutt’s focus is not on debunking propaganda for war but on providing aid. She claims that “the single greatest impediment to peace [is] the marginalization of women and girls.” Really? I don’t deny its significance. But the single greatest impediment? Just a few pages later, Nutt is recognizing NATO’s interest in pretending to have a reason to exist as a cause of the violence she’s discussing in Somalia—a place that does not manufacture the weapons used in it and still wouldn’t if it stopped marginalizing women. A few lines later, Nutt is describing how using militaries trained and armed for war to provide aid tends to produce, on the contrary, war. Not only does the U.S. invest many times more in war than in aid, but it ruins prospects for private aid organizations by destroying, as Nutt recounts in Somalia, the ability of aid groups to claim neutrality, and the ability of suffering people to trust the advice of foreign doctors.

Nutt writes as well as anyone on the topic of Western society’s deep financial investment in war:

“The New York State Teachers’ Retirement System, for example, has nearly $2 billion invested in weapons manufacture. When teachers start betting on a boom in weapons sales to see them through their golden years, it’s time to load the trunk of the car with flashlights and soup cans.”

“Peace, development, and security will remain stubbornly out of reach for any civilian population choking on weapons fed to them by countries with eighty times their GDP.”

That strikes me as right, and as grounds for putting our efforts into ending arms dealing.