On (Not) Loving Henry Kissinger 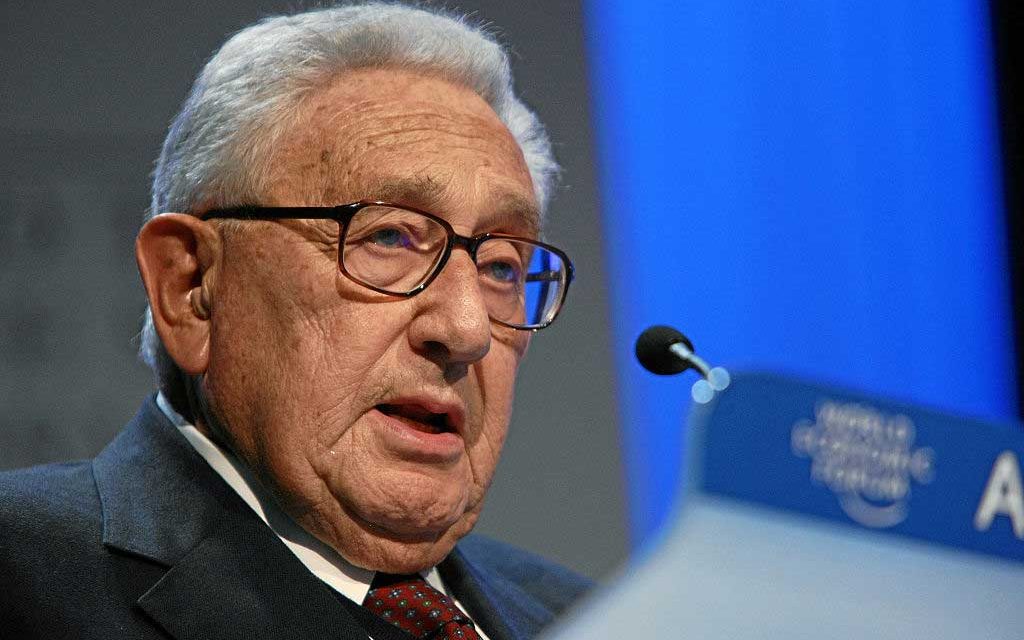 Such is Henry Kissinger's lofty reputation that no amount of crimes or horrific errors of judgment can diminish his public stature.

There is an irony that would be amusing if it was not depressing about news that Donald Trump has been courting the 92-year old foreign policy sorcerer Henry Kissinger. Of course, the irony is that earlier in the presidential campaign Hillary Clinton proudly claimed Kissinger as “a friend,” and acknowledged that he “relied on his counsel” while she served as Obama’s Secretary of State between 2009-2013. It is indeed strange that the only point of public convergence between free-swinging Trump and war-mongering Clinton should be these ritual shows of deference to the most scandalous foreign policy figure of the past century.

Kissinger should not be underestimated as an international personality with a sorcerer’s dark gifts. After all, he was awarded a Nobel Peace Prize in 1973 for his perverse role in Vietnam diplomacy. Kissinger had supported the war from its inception and was known as a strong proponent of the despicable ‘Christmas bombing’ of North Vietnam. He had earlier joined with Nixon in secretly extending the Vietnam War to Cambodia, incidentally without Congressional knowledge, much less authorization. This led to the total destabilization and devastation of a country that had successfully maintained its neutrality for the prior decade. It also generated the genocidal takeover by the Khmer Rouge in the 1970s resulting in the death of a third of the Cambodian population. It was notable that the Nobel had been jointly awarded to Luc Duc Tho, Kissinger’s counterpart in the negotiations, who exhibited his dignity by declining the prize, while Kissinger as shameless as ever, accepted and had an assistant deliver his acceptance speech because he was too busy to attend. Significantly, for the first time, two members of the Nobel Selection Committee resigned their position in disgust.

The more familiar, and more damning allegation against Kissinger, is his association with criminal violations of international law. These are convincingly set forth in Christopher Hitchens The Trial of Henry Kissinger (2001). Hitchens informed readers that he “confined himself to the identifiable crimes that can and should be placed on a proper bill of indictment.” He omitted others. Hitchens lists six major crimes of Kissinger:

Whether the evidence available would support a conviction in an international tribunal is far from certain, but Kissinger’s association and approval of these unlawful and inhumane policies, and many others, is clear beyond reasonable doubt.

In some respects as damaging as these allegations of complicity in war crimes is, it is not the only reason to question Kissinger’s credentials as guru par excellence. Kissinger shares with Hillary Clinton a record of bad judgments, supporting some foreign policy initiatives that would be disastrous if enacted and others that failed while inflicting great suffering on a foreign civilian population. In his most recent book, World Order published in 2014, Kissinger makes a point of defending his support of George W. Bush’s foreign policy with specific reference to the war of aggression undertaken in 2003. In his words, “I supported the decision to undertake regime change in Iraq. I want to express here my continuing respect and personal affection for President George W. Bush, who guided America with courage, dignity, and conviction in an unsteady time. His objectives and dedication honored his country even when in some cases they proved unattainable within the American political cycle.” [pp. 324-325] One would have hoped that such an encomium to the internationally least successful U.S. president would be a red flag for those presidential candidates turning to Kissinger for guidance, but such is his lofty reputation, that no amount of crimes or errors of judgment can diminish his public stature.

Kissinger first attracted widespread public attention with a book that encouraged relying on nuclear weapons in a limited war scenario in Europe, insisting that the United States could prudently confront the Soviet Union without inviting an attack on its homeland. [Nucelar Weapons and Foreign Policy (1967). As already indirectly suggested, he supported the Vietnam War, the anti-Allende coup in Chile, Indonesian genocidal efforts to deny independence to East Timor, and many other dubious foreign policy undertakings that turned out badly, even from his own professed realist perspective.

It is true that Kissinger has a grasp of the history of diplomacy that impresses ordinary politicians such as Trump and Clinton. True, also, he rode the crest of the wave with respect to the diplomatic opening to China in 1972 and pursued with impressive energy the negotiation of ceasefire arrangements between Israel and Egypt and Israel and Syria after the 1973 Arab-Israeli War. As well, TIME magazine had a cover featuring Kissinger dressed as superman, dubbing their hero as “super-K.” There is, in this sense, no doubt that Kissinger has been a master as refurbishing his tarnished reputation over the course of decades.

Yet fairly considered, whether from a normative or strategic outlook, I would have hoped that Kissinger should be viewed as “discredited” rather than as the most revered repository of foreign policy wisdom in this nation. Barry Sanders struck the proper note when he said, “I am proud to say that Henry Kissinger is not my friend.” And when queried by Clinton as to whom he would heed, Sanders responded, “I will not take advice from Henry Kissinger.” In contrast, the words of Hillary Clinton confirm her affinity for the man: “He checked in with me regularly, sharing astute observations about foreign leaders and sending me written reports on his travels.” In fairness, she did qualify this show of deference with these words: “[t]hough we have often seen the world and some of our challenges quite differently, and advocated different responses now and in the past….” This was the only saving grace in her otherwise gushing review of Kissinger’s World Order (2014) published in the Washington Post.

Let me offer a final comment on this shared adulation of Kissinger as the éminence grise of American foreign policy by the two likely candidates for the presidency. It epitomizes and helps explain the banality of the political discourse that has dominated the primary phases of the presidential campaign. It is hardly surprising that during this time dark clouds of despair hang heavy in the skies above the American body politic. Before either presidential hopeful even walks into the Oval Office both Trump and Clinton are viewed unfavorably by over half of all Americans, and regarded with a mixture of dismay, fear, and shock by political leaders and their publics around the world. To show obeisance to Kissinger’s wisdom and wizardry is thus emblematic of the paucity of mainstream American political imagination, and should worry all who care about the future of the country and the world.