Roots of the Conflict: Palestine’s Nakba in the Larger Arab ‘Catastrophe’ 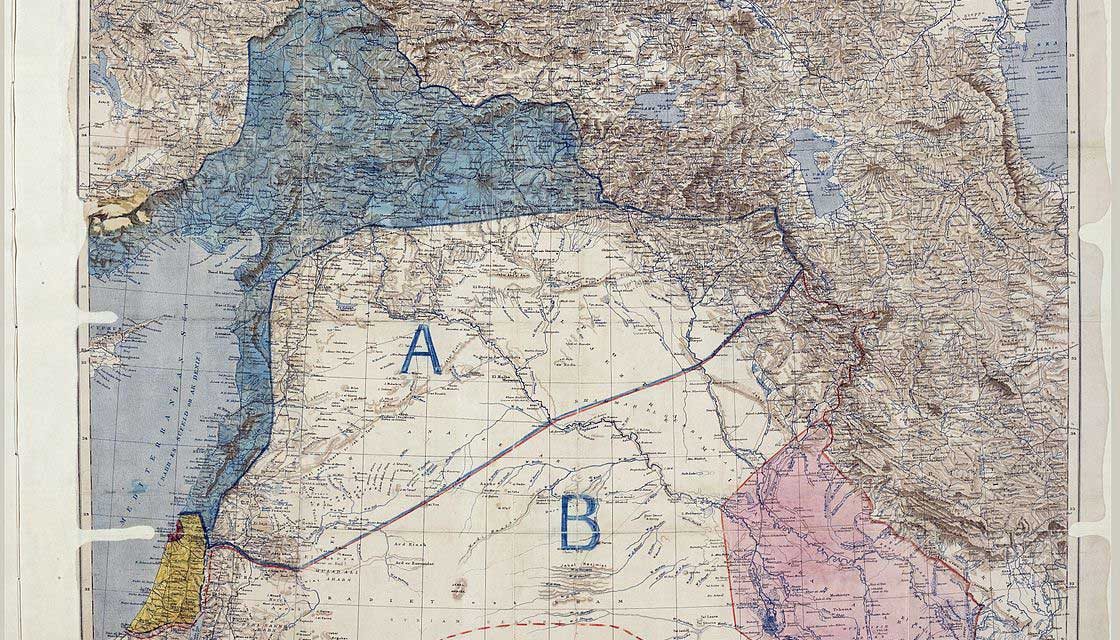 Map of Sykes–Picot Agreement showing Eastern Turkey in Asia, Syria and Western Persia, and areas of control and influence agreed between the British and the French. Royal Geographical Society, 1910-15. Signed by Mark Sykes and François Georges-Picot, 8 May 1916. (UK National Archives)

The Palestinian ‘Nakba’ must be understood as part and parcel of the larger western designs in the Middle East dating back a century.

On May 15th of every year, over the past 68 years, Palestinians have commemorated their collective exile from Palestine. The ethnic cleansing of Palestine to make room for a ‘Jewish homeland’ came at a price of unrelenting violence and perpetual suffering. Palestinians refer to that enduring experience as ‘Nakba’, or ‘Catastrophe’.

However, the ‘Nakba’ is not merely a Palestinian experience; it is also an Arab wound that never ceases from bleeding.

The Arab ‘Nakba’ was namely the Sykes-Picot Agreement, which divided much of the Arab world between competing Western powers. A year later, Palestine was removed from the Arab equation altogether and ‘promised’ to the Zionist movement in Europe, creating one of the most protracted conflicts in modern human history.

Despite all attempts at separating the current conflict in Palestine from its larger Arab environs, the two realities can never be delinked since they both go back to the same historical roots.

How Did This Come about?

When British diplomat, Mark Sykes, succumbed to the Spanish flu pandemic at the age of 39, in 1919, another diplomat, Harold Nicolson, described his influence on the Middle East region as follows:

“It was due to his endless push and perseverance, to his enthusiasm and faith, that Arab nationalism and Zionism became two of the most successful of our war causes.”

Retrospectively, we know that Nicolson spoke too soon. The breed of ‘Arab nationalism’ he was referencing in 1919 was fundamentally different from the nationalist movements that gripped several Arab countries in the 1950s and 60s. The rallying cry for Arab nationalism in those later years was liberation and sovereignty from Western colonialism and their local allies.

Sykes’ contribution to the rise of Zionism did not promote much stability, either. The Zionist project transformed into the State of Israel, itself established on the ruins of Palestine in 1948. Since then, Zionism and Arab nationalism have been in constant conflict, resulting in deplorable wars and seemingly perpetual blood-letting.

However, Sykes’ lasting contribution to the Arab region was his major role in the signing of the Sykes-Picot Agreement, also known as the Asia Minor Agreement, one hundred years ago. That infamous treaty between Britain and France, which was negotiated with the consent of Russia, has shaped the Middle East’s geopolitics for an entire century.

Throughout the years, challenges to the status quo imposed by Sykes-Picot failed to fundamentally alter its arbitrarily-sketched borders, which divided the Arabs into ‘spheres of influence’ to be administered and controlled by Western powers.

Yet, with the recent rise of ‘Daesh’ and the establishment of its own version of equally arbitrary borders encompassing large swathes of Syria and Iraq as of 2014, combined with the current discussion of dividing Syria into a federation, Sykes-Picot’s persisting legacy could possibly be dithering under the pressures of new, violent circumstances.

Sykes-Picot was signed as a result of violent circumstances that gripped much of Europe, Asia, Africa and the Middle East at the time.

It all started when World War I broke out in July 1914. At the time, major European powers fell into two camps: the Allies—consisting mainly of Britain, France and Russia—vs. the Central Powers—Germany and Austria-Hungary.

The Ottoman Empire soon joined the war, siding with Germany, partly because it was aware that the Allies’ ambitions sought to control all Ottoman territories, which included the Arab regions of Syria, Mesopotamia, Arabia, Egypt and North Africa.

In March 1915, Britain signed a secret agreement with Russia that would allow the latter to annex the Ottoman capital and seize control of other strategic regions and waterways.

A few months later, in November 1915, Britain and France began negotiations in earnest, aimed at dividing the territorial inheritance of the Ottoman Empire should the war conclude in their favor.

Russia was made aware of the agreement, and assented to its provisions.

Thus, a map that was marked with straight lines with the use of a Chinagraph pencil largely determined the fate of the Arabs, dividing them in accordance with various haphazard assumptions of tribal and sectarian lines.

Negotiating on behalf of Britain was Mark Sykes, and representing France was François Georges-Picot. The diplomats resolved that, once the Ottomans were soundly defeated, France would receive areas marked (a), which include the region of south-eastern Turkey, northern Iraq—including Mosel, most of Syria and Lebanon.

Area (b) was marked as British-controlled territories, which included Jordan, southern Iraq, Haifa and Acre in Palestine and the coastal strip between the Mediterranean Sea and the River Jordan.

Russia, on the other hand, would be granted Istanbul, Armenia and the strategic Turkish Straits.

The improvised map consisted not only of lines but also colors, along with language that attested to the fact that the two countries viewed the Arab region on purely materialistic terms, without paying the slightest attention to the possible repercussions of slicing up entire civilizations with a multifarious history of co-operation and conflict.

The Sykes-Picot negotiations concluded in March 1916 and was official, although it was secretly signed on May 19, 1916.

WWI concluded on November 11, 1918, after which the division of the Ottoman Empire began in earnest.

British and French mandates were extended over divided Arab entities, while Palestine was granted to the Zionist movement over which a Jewish state was established, three decades later.

The agreement, which was thoroughly designed to meet Western colonial interests, left behind a legacy of division, turmoil and war.

While the status quo it has created guaranteed the hegemony of Western countries over the fate of the Middle East, it failed to guarantee any degree of political stability or engender economic equality.

The Sykes-Picot Agreement took place in secret for a specific reason: it stood at complete odds with promises made to the Arabs during the Great War. The Arab leadership, under the command of Sharif Hussein, was promised complete independence following the war, in exchange for supporting the Allies against the Ottomans.

It took many years and successive rebellions for Arab countries to gain their independence. Conflict between the Arabs and colonial powers resulted in the rise of Arab nationalism, which was born in the midst of extremely violent and hostile environments, or more accurately, as an outcome of them.

Arab nationalism may have succeeded in maintaining a semblance of an Arab identity but failed to develop a sustainable and unified retort to Western colonialism.

When Palestine—which was promised by Britain as a national home for the Jews as early as November 1917—became Israel, hosting mostly Europeans settlers, the fate of the Arab region east of the Mediterranean was sealed as the ground for perpetual conflict and antagonism.

It is here, in particular, that the terrible legacy of the Sykes-Picot Agreement is mostly felt, in all of its violence, shortsightedness and political unscrupulousness.

100 years after two British and French diplomats divided the Arabs into spheres of influence, the Sykes-Picot Agreement remains a pugnacious but dominant reality of the Middle East.

Five years after Syria descended into a violent civil war, the mark of Sykes-Picot are once more being felt as France, Britain, Russia—and now the United States—are considering what US Secretary of State, John Kerry, recently termed ‘Plan B’ – dividing Syria based on sectarian lines, likely in accordance with a new Western interpretation of ‘spheres of influence.’

The Sykes-Picot map might have been a crude vision drawn hastily during a global war but, since then, it has become the main frame of reference that the West uses to redraw the Arab world, and to “control (it) as they desire and as they may see fit.”

The Palestinian ‘Nakba’, therefore, must be understood as part and parcel of the larger western designs in the Middle East dating back a century, when the Arabs were (and remain) divided and Palestine was (and remains) conquered.