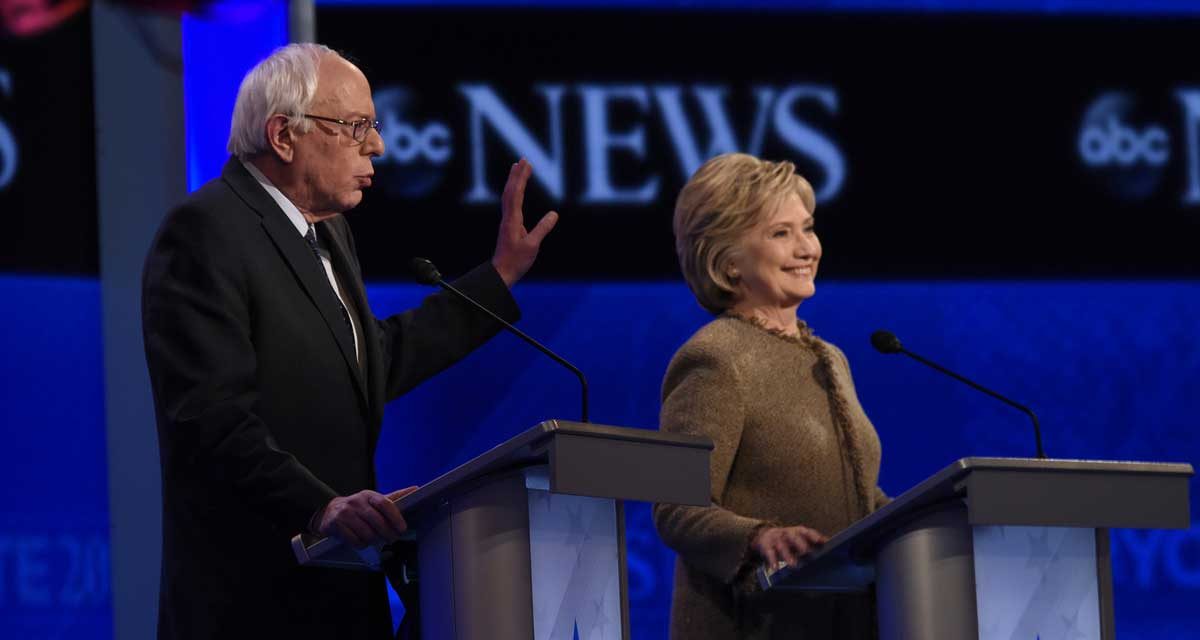 The US is a plutocratic imperial power, not a democracy, and one engaged in vast military and secret state security operations. 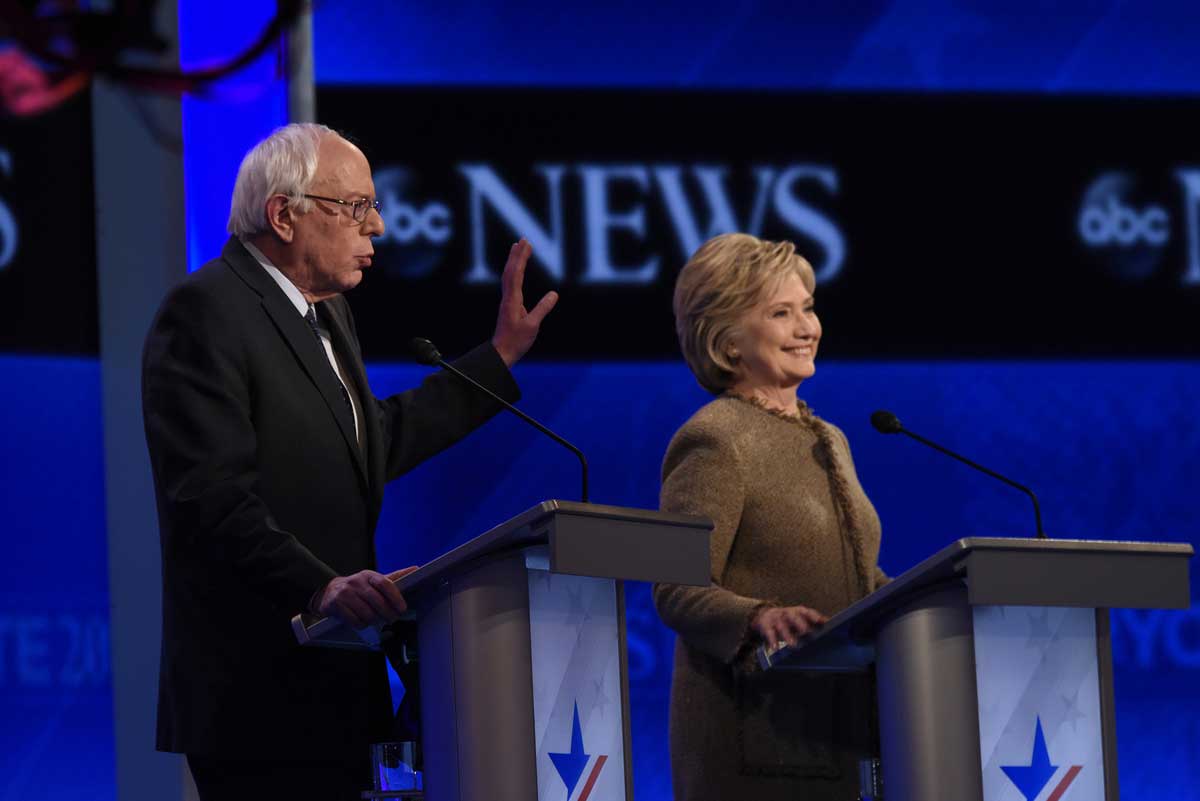 I keep reading stuff in British papers about what America’s Left must do in an election where Donald Trump “has thrown caution to the wind.” Each time I read anything along that line, invariably, I ask myself, “What Left are they talking about?” As perhaps few in Europe understand, there is no Left in the United States.

Bernie Sanders comes closest to being Left, but he is not only from one of the very smallest states in the Union, it is a state known for its liberal bent, something which exists in very few corners of that huge “pounding fist” of a country.

It would be refreshing if Sanders could win, but he cannot. The odds are completely stacked against him. I believe the unexpected force of his campaign, this man whose name was widely unknown west of New England in a campaign against someone whose name and face are, by contrast, as well known as Hershey bars, is a quiet wave of public recognition of just how repulsive a person Hillary Clinton is. It seems a miracle that he has run so well against her, sometimes beating or virtually tying her.

But remember, this is America we’re talking about, a plutocratic imperial power, not a democracy, and one engaged in vast military and secret state security operations. There is simply no room for a self-declared “democratic socialist.” America has no truck with socialists, even rather nice and soft ones.

Money counts hugely in politics, as it does in every nook and cranny of American life. An accurate motto for America might well be, “If it can’t be bought, it ain’t worth having.” Hillary is exceptionally well connected with, and financed by, the people who really count in shaping American government. Short of a tidal wave of support, any primary lead by Sanders would be stripped of delegates or would be defeated by “super-delegates” at the convention by party insiders.

As for Hillary being elected, nothing in my view could be a greater disaster. She has a murderous record, and I doubt she has told the truth twice in her entire life.

There is simply no question about her tendency to brutal violence. She pushed husband Bill on the needless war in Serbia. She advocated inside the administration for what became the Waco horror. She voted for the illegal invasion of Iraq. She ran at least part of what went on in Libya, a black operation to gather weapons and men to send to Turkey for terrorizing Syria. And we have her brutal idea of humor, complete with sneering laughter, about Gadhafi, a man who on the whole did a decent job of governing in a difficult part of the world: “We came, we saw, he died.” She supports Israel’s worst bloody excesses with a smile and regularly takes money from some of the people who work strenuously to keep them going.

Trump carries a great deal of heavy baggage, and has said many things with which I totally disagree, but he does not have Hillary’s record of death and destruction on a grand scale. He may often be quite unpleasant, but Hillary is almost certainly a psychopath whose narcissistic personality feels driven and entitled to be President so she can continue toying with human beings. I reject 90% of what Trump says, but I reject just about 100% of what Hillary has actually done.

There is one area, and a very important one, where possibly Trump can do something good for the world, and that is foreign affairs. Some of his views there are sound, sounder by far than Hillary’s. His views on matters like Syria and Russia are entirely rational and not weighed down by America’s malicious policies of the last quarter century, policies which Hillary not only supports but helped to establish and execute.

A vote for Hillary is a vote for more American bullying and terror in the world, and that is not in the least an exaggeration.  Terror is the right word for what America has done in the Middle East: it has crashed and raged through the region, leaving it in blazes. Hillary has served as a “willing executioner” in that hellish effort.

If you look at the groups and individuals who are key Hillary supporters, it is a pretty grim picture. It includes many corrupt and brutal foreign governments such as Saudi Arabia, Qatar, Bahrain, and Israel, and a vast collection of gigantic international corporate special interests, even financial terrorists like the firm of Goldman Sachs who played a key role in the collapse of 2008 and who have never really been called to account for bringing so many to ruin. There is not a glimmer of genuine liberalism or democratic ideals in the people paying and easing her way, although she likes to put on her best clownishly little-girl face and claim how interested she is in the welfare of ordinary Americans at campaign stops.

If we could only gain some sense and rationality in America’s foreign affairs, it would be a genuine advance for the entire world. Almost certainly you have to pay a price for doing that in a place like the United States. Nothing comes free in a throbbing plutocratic power. That price may be living with Trump’s many unpleasant aspects.

The neocons especially see that possibility in Trump, which is why they hate him beyond telling. Already many have said really ugly things in public. And, remarkably, the word “assassination” keeps popping up in those circles. That fact alone should tell us how destructive the impact of the neocons has been upon America’s own society.

It would have been unthinkable fifty years ago for prominent Americans to talk or joke of assassinating a political candidate.  That is how low American society has sunk during its long march with neocons, bombing, invading, promoting terrorism through proxies, and assassinating in the Middle East and in places like Ukraine—virtually all of which derives from the special influence of the neocons.

The political poverty of America was embarrassingly displayed in the original field of Republican candidates which resembled nothing so much as Madame Tussaud’s Chamber of Horrors. Fortunately, most of them are gone. As for Ted Cruz, the neocons’ possible “go to” man for stopping Trump, he is, just for a start, a right-wing religious wacko. There is a video of him on-line sitting at breakfast holding hands with his perfect little suburban family praying over the Sugar Pops. Staff working for Cruz include neo-con and CIA-types, and his wife is associated with Goldman Sachs. He is intellectually gifted, but many of his old associates in government say he is an extremely unpleasant man with which to work, extremely arrogant, and one not to be trusted, being given to treacherous turns. His former roommate at Princeton tells of getting e-mails from other students asking why he didn’t suffocate Cruz with a pillow while he had the chance. At least one person has commented on his resemblance to a serial killer. It would be a pretty desperate move by Republicans to try stopping Trump by loading Cruz, a man they simply don’t like, with money and influence. And I tend to feel the effort would fail in any event.

You get nothing free in a big, ugly place like America, so if you would like to see some end to a quarter century of brutal wars and the savage practices which have taken root under Bush/Clinton/Obama, perhaps you need to take a chance.

As few non-Americans realize, in domestic affairs the American President’s office is a rather weak one. It was designed to be that way. We have seen the frustration of Obama trying increasingly to govern by executive order, a pernicious practice not much different than imperial fiats, but even with that practice he has made little headway in this rigidly structured society. And no one, certainly no genuine liberal, ever can, without fundamental changes we have no reason to expect any time soon. America in its governance much resembles a giant wearing a huge, thick suit of concrete.

It is only in the area of military and foreign affairs that the American President has some real power, and that is an area which needs serious change. It won’t happen under bloodthirsty Hillary, loyal servant to neocon interests.

As far as ugly stuff like great walls or drastic changes to migration, Trump could do nothing without both houses of Congress, so they are proposals unlikely to become realities. Even on such domestic subjects, however, we do hear echoes of the neocon influence. After all, Israel has built many walls and builds more now, all on other people’s land and all of which prevent normal life for millions of others. It couldn’t be more unfair and anti-democratic, but the same people viciously attacking Trump for his proposals are the last ones to say a word about Israel’s actual practices. So those most violently attacking Trump cannot claim concerns for human decency or human rights motivate them, although they very much pretend to do so rather than being open about their real motives. Calling Trump a fascist over mere rhetoric and proposals is pretty ridiculous when we see Israel’s actual practices left unquestioned by crowds of prominent people.