Obama Readies to Fight in Libya—Again 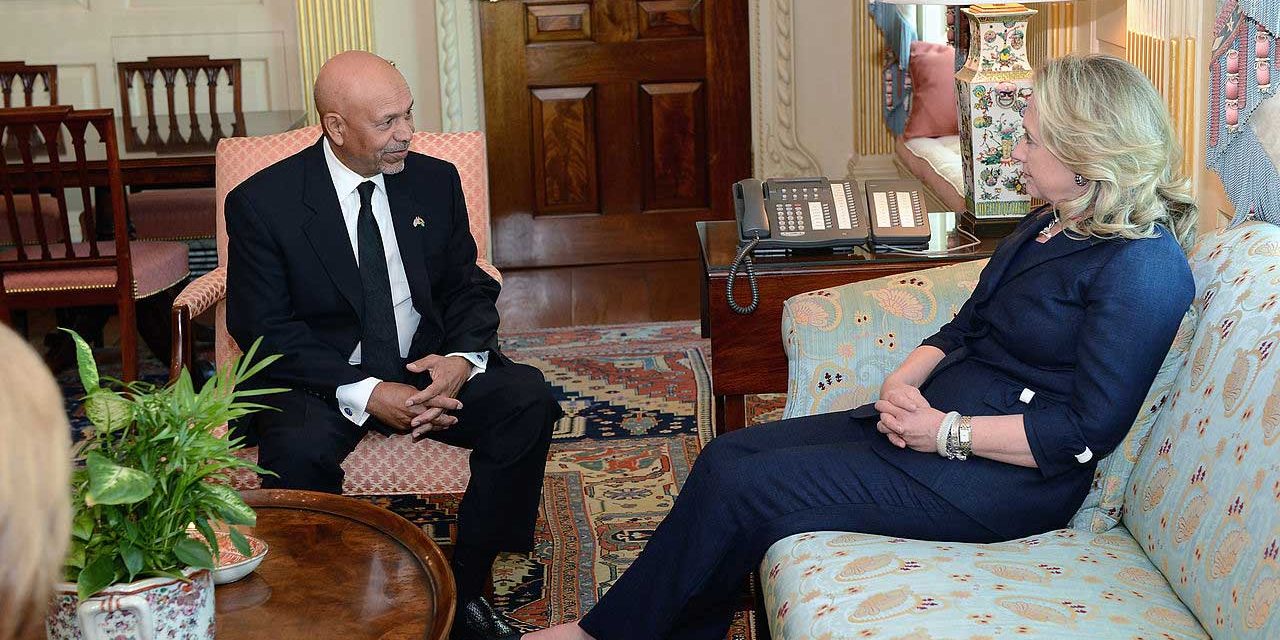 US Secretary of State Hillary Clinton meets with Libya's Ambassador to the US Ali Suleiman Aujali at the U.S. Department of State in Washington, D.C. on September 12, 2012. (US State Department)

The same countries whose war on Libya caused the present chaos there are contemplating doing it again.

Nearly five years after the US, Britain, and France launched a bombing campaign against the Libyan government to bring about regime change, these same countries are contemplating a resumption of the war they thought was won when rebel forces they supported grotesquely tortured to death the country’s leader, Col. Muammar Gaddafi.

The result today in Libya is utter disarray. But at the time, former Secretary of State Hillary Clinton—a leading advocate of the bombing who justifies the deed to this day—was ecstatic when told the news of Qaddafi’s death while she was appearing on a TV talk show. Laughingly she shouted to the cameras, “We came, we saw, he died!”

No one is laughing in Washington now. President Obama came, saw and created the very opposite of what he sought, a hardly unusual outcome for the Obama and Bush Administrations in the Middle East. Instead of a pliable dependent government willing to do the bidding of Washington and its NATO foreign legion, there has been an explosion of civil war and Sunni jihadism.

The US and UN have been striving for months to unite the two factions in Libya that claim to be the country’s government. On Feb. 1 the faction that that has been recognized by the US and many nations rejected unity with its opposite number. The bedlam in Libya caused by the 2011 overthrow has allowed the Islamic State (IS) to grow strong and occupy several territories.

Agence France-Presse reported Jan. 29: “Barack Obama has asked key advisors to draw up options for ratcheting up the fight against the Islamic State group, including opening a new front in Libya…. Potential options are said to range from intensified air strikes to participation in a UN-backed ground force that would help take on Libya’s estimated 3,000 Islamic State fighters…. The Defense Department announced it stands ready to perform the full spectrum of military operations a required.”

The US and France are preparing for “decisive military action” in Libya against the IS, according to a statement on January 22 by Gen. Joseph F. Dunford Jr., the chairman of the Joint Chiefs of Staff. He said a final decision would be made in a matter or weeks, and that President Obama “has made clear that we have the authority to use military force.”

The New York Times reported on January 23, “United States and British Special Operations teams have for months been conducting clandestine reconnaissance missions in Libya to identify militant leaders and map out their networks. Separate teams of American Special Operations forces have over the past year been trying to court allies from among a patchwork of Libyan militias that remain unreliable, unaccountable, poorly organized and divided by region and tribe.

“In recent weeks, military commanders have intensified their warnings about the threat from the Islamic State in Libya, where Western officials believe the group now has about 3,000 fighters. Recruits are pouring into Libya weekly, as the journey to Iraq and Syria has become more difficult with Turkey tightening its border with Syria, intelligence officials said.”

On January 27, the Times declared in an editorial: “This significant escalation is being planned without a meaningful debate in Congress about the merits and risks of a military campaign that is expected to include airstrikes and raids by elite American troops. That is deeply troubling. A new military intervention in Libya would represent a significant progression of a war that could easily spread to other countries on the continent.”

Stratfor analyst Scott Steward predicted a month before the first US/NATO attack in March 2011 that pandemonium would ensue. Now, on January 27, he wrote:

“As the United States and its European and regional allies prepare to intervene in Libya, they should be able to reduce the jihadist’s ability to openly control territory. However, they will face the same challenge they did in 2011—building a stable political system from the shattered remains of what was once a country. Now, Libya is a patchwork of territories controlled by a variety of ethnic, tribal and regional warlords. The last five years of fighting has led to significant hatred and blood feuds between these competing factions, which will only compound the challenges ahead.”

On January 28, Aljazeera reported: “Taking advantage of the chaos and large swaths of ungoverned territory caused by Libya’s civil war, Islamic State has established three separate wilayat (provinces) there since late 2014—Tarablus along the west coast, Fezzan in the southwest, and Barqah in the east, with the key coastal city of Sirte serving as its Libyan capital. Like its parent group in Syria and Iraq, IS in Libya has uploaded video proof of its atrocities to the Internet, including mass decapitations of Egyptian, Ethiopian and Eritrean Christians.”

Why should we not be surprised about additional US military escalations in the Middle East and the probability of many more to come? The Bush Administration’s 2001 war in Afghanistan is still going on and will not end with a US military victory. Washington’s 2003 illegal invasion of Iraq is still going on in its second excruciating incarnation. President Obama’s call for regime change in Syria and support for the rebels has transformed this country into a slaughterhouse, resulting in up to 250,000 deaths and millions of refugees. Last year’s US backed and equipped Saudi Arabian invasion of Yemen is still going on with no end approaching. And President Obama still approves a weekly kill list of human targets for his drone wars.

Washington has been politically and militarily involved with the Middle East for over 70 years. It has overthrown governments and invaded countries to bolster its regional authority. During that time it has supported a plethora of dictators, working with them over the years to virtually destroy the entire political left and liberalism throughout the region.

In the absence of a strong rational internal political opposition to bring about progressive political change and to protect their countries from the influence and depredations of Western imperialism, the religio-fascist IS and other Sunni fundamentalist fanatics represent the only—but warped and backward—opposition to US dominion. It is certainly not the answer to the grave problems afflicting the people and countries throughout the region.

The US political system, like the Bourbon dynasty in France, has learned nothing and forgotten nothing after all these decades of deep penetration in the Middle East, supporting reactionary regimes, causing the deaths of well over a million people and the destruction of entire societies.

Judging by the present political situation in the US, Washington in the foreseeable future will continue supporting the dictatorships and fighting endless wars to secure its regional “leadership,” Obama’s code word for American domination. Now it looks like US “leadership” is being disrespected in Libya—so off we go, again. Only a massive, politically enlightened peace movement in the US can stop this continual cycle of aggression and mayhem.