Russia, As Explained to Russians by Americans 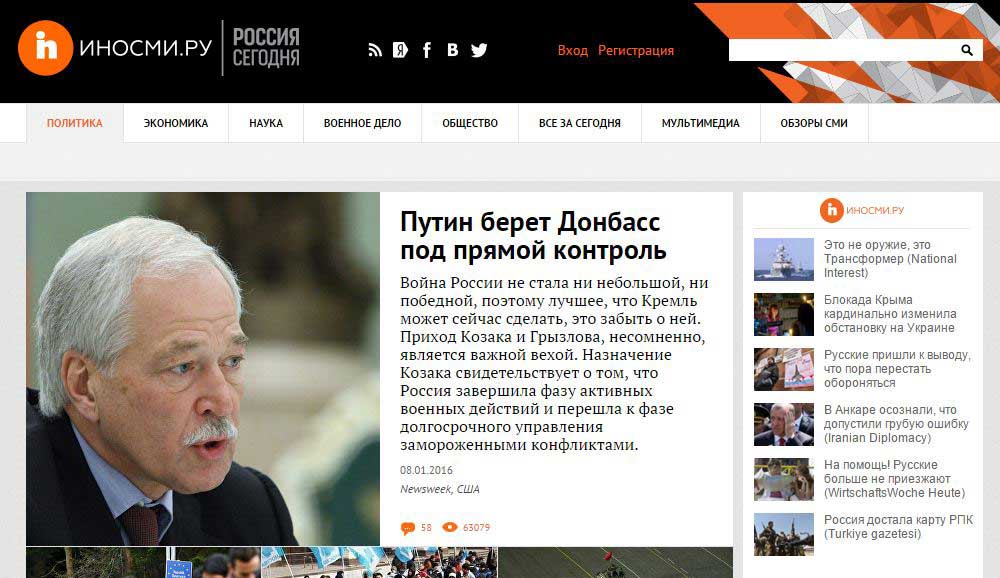 There is a Russian website that translates Western media articles so that Russians can see with their own eyes how the Western media lies about them.

There is a Russian website, inosmi.ru, that translates propagandistic russophobic articles from the western media into Russian and publishes them so that Russians can see with their own eyes how the Western media lies about them day after day. There have been several articles lately based on polls that show that anti-western sentiments are increasing in Russia, and blaming it on “Putin’s propaganda”.

This is rather odd because who needs propaganda when the Russians can read the Western media themselves and see firsthand all the lies it puts forth about them and the demonizing of Putin. There are several political-debate shows on Russian television where they invite Western journalists or politicians; on one there frequently is a really funny American journalist, Michael Bohm, who keeps regurgitating all the western propaganda, arguing with his Russian counterparts. It’s pretty surreal to watch him display the worst political stereotypes of Americans: arrogant, gullible, and ignorant. He stands there and lectures high ranking Russian politicians, “explaining” to them the “real” Russian foreign policy, and the “real” intentions behind their actions, as opposed to anything they say. The man is shockingly irony-impaired. It is as funny to watch as it is sad and scary.

The above was written with the help of a woman who was raised in the Soviet Union and now lives in Washington. She and I have discussed US foreign policy on many occasions. We are in very close agreement as to its destructiveness and absurdity.

Just as in the first Cold War, one of the basic problems is that Exceptional Americans have great difficulty in believing that Russians mean well. Apropos this, I’d like to recall the following written about George Kennan (Walter Isaacson & Evan Thomas, The Wise Men (1986), p.158):

Crossing Poland with the first US diplomatic mission to the Soviet Union in the winter of 1933, a young American diplomat named George Kennan was somewhat astonished to hear the Soviet escort, Foreign Minister Maxim Litvinov, reminisce about growing up in a village nearby, about the books he had read and his dreams as a small boy of being a librarian.

“We suddenly realized, or at least I did, that these people we were dealing with were human beings like ourselves,” Kennan wrote, “that they had been born somewhere, that they had their childhood ambitions as we had. It seemed for a brief moment we could break through and embrace these people.”

It hasn’t happened yet.

Kennan’s sudden realization brings George Orwell to mind: “We have now sunk to a depth at which the restatement of the obvious is the first duty of intelligent men.”