The Rule of Law No Longer Exists in Western Civilization

In the US, law is a weapon in the hands of the government to be used against the American people.

My work documenting how the law was lost began about a quarter of a century ago.  A close friend and distinguished attorney, Dean Booth, first brought to my attention the erosion of the legal principles on which rests the rule of law in the United States.  My columns on the subject got the attention of an educational institution that invited me to give a lecture on the subject.  Subsequently, I was invited to give a lecture on “How The Law Was Lost” at the Benjamin Cardozo School of Law in New York City.

The work coalesced into a book, The Tyranny of Good Intentions, coauthored with my research associate, Lawrence M. Stratton, published in 2000, with an expanded edition published in 2008.  We were able to demonstrate that Sir Thomas More’s warning about prosecutors and courts disregarding law in order to more easily convict undesirables and criminals has had the result of turning law away from being a shield of the people and making it into a weapon in the hands of government.  That is what we witness in the saga of the Hammonds, long-time ranchers in the Harney Basin of Oregon.

With the intervention of Ammon Bundy, another rancher who suffered illegal persecution by the Bureau of Land Management but stood them off with help from armed militia, and his supporters, the BLM’s decades long persecution of the innocent Hammonds might have come to a crisis before you read this.

Bundy and militiamen, whose count varies from 15 to 150 in the presstitute media, have seized an Oregon office of the BLM as American liberty’s protest against the frame-up of the Hammonds on false charges.  As I write, the Oregon National Guard and FBI are on the way.

The militiamen have said that they are prepared to die for principles, and the rule of law is one of them.  Of course, the presstitute media is making the militiamen into the lawbreakers—and even calling them terrorists—and not the federal government’s illegal prosecution of the Hammonds, whose crime was their refusal to sell their ranch to the government to be included in the Masher National Wildlife Refuge.

If there are only 15 militiamen, there is a good chance that they will all be killed, but if there are 150 armed militiamen prepared for a shootout, the outcome could be different. 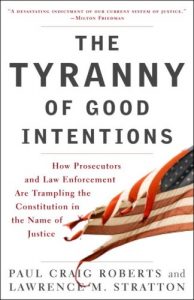 I cannot attest to the accuracy of this report of the situation. The resources required to verify the information in this account of how the government escalated a “crisis” out of the refusal of a family to bend is beyond the resources of my website.  However, the story fits perfectly with everything Lawrence Stratton and I learned over the years that we prepared our book on how the law was lost.  This account of the persecution of the Hammonds is the way government behaves when government has broken free of the rule of law.

I can attest with full confidence that the United States no longer has a rule of law.  The USA is a lawless country.  By that I do not mean what conservative Republicans mean, which is, if I understand them, that racial minorities violate law with something close to impunity.

What I mean is that only the mega-banks and the One Percent have legal protection, and that is because these people control the government.  For everyone else law is a weapon in the hands of the government to be used against the American people.

The fact that the shield of law no longer exists for American citizens is why, according to US Department of Justice statistics, only 4 percent of federal felonies ever go to trial.  Almost the entirety of federal felonies are settled by coerced plea bargains that force defendants to admit to crimes that they did not commit in order to avoid “expanded indictments” that, if presented to the typical stupid, trusting, gullible American “jury of their peers,” would lock them away for hundreds of years.

American justice is a joke.  It does not exist.  You can see this in the American prison population. “Freedom and Democracy” America not only has the largest percentage of its population in prison than any country on the planet, but also the largest number of prisoners.

Compared to “freedom and democracy America,” Russia has hardly anyone in prison.  Yet, Washington and its media whores have defined the President of Russia as “the new Hitler.”

The only thing we can conclude from the facts is that the United States Government and those ignorant fools who worship it are evil incarnate.

Out of evil comes dictatorship.  The White House Fool, at best a two-bit punk, has decided that he doesn’t like the Second Amendment to the US Constitution any more than he likes any of the other constitutional protections of US citizens.  He is looking for dictatorial methods, that is, unlegislated executive orders, to overturn the Second Amendment.  He has the corrupt US Department of Justice, a criminal organization, looking for ways for the dictator to overturn both Congressional legislation and Supreme Court rulings.

The media whores have fallen in line with the would-be dictator.  All we hear is “gun violence.”  If only Karl Marx were still with us.  He would ridicule these fools for turning inanimate objects into purposeful actors.  It is extraordinary that the American left-wing thinks that guns, not people, kill people.

Whatever this “progressive left-wing opposition” is, it has nothing in common with revolutionaries.  The American left-wing is totally irrelevant, a defeated force that sold out and no longer represents the people or the truth.

I cannot but wonder how much the American “progressive left” is being paid by Washington.

If protesting the murder of a young black American by Ferguson police is not legitimate and the protesters are “terrorists,” why aren’t the Oregon protesters terrorists for trying to protect jailbirds from their “lawful sentence”?  This is the wrong question.

It is also discouraging that RT decided to play the race card instead of comprehending that law is no longer a shield of the American people but is a weapon in the hands of Washington.

Why doesn’t RT at least listen to the President of Russia, who states repeatedly that America and the West are lawless.

Putin is correct.  America and its vassals are lawless.  No one is safe from the government.