Islamophobia in the US and the Case of the Arabic Language 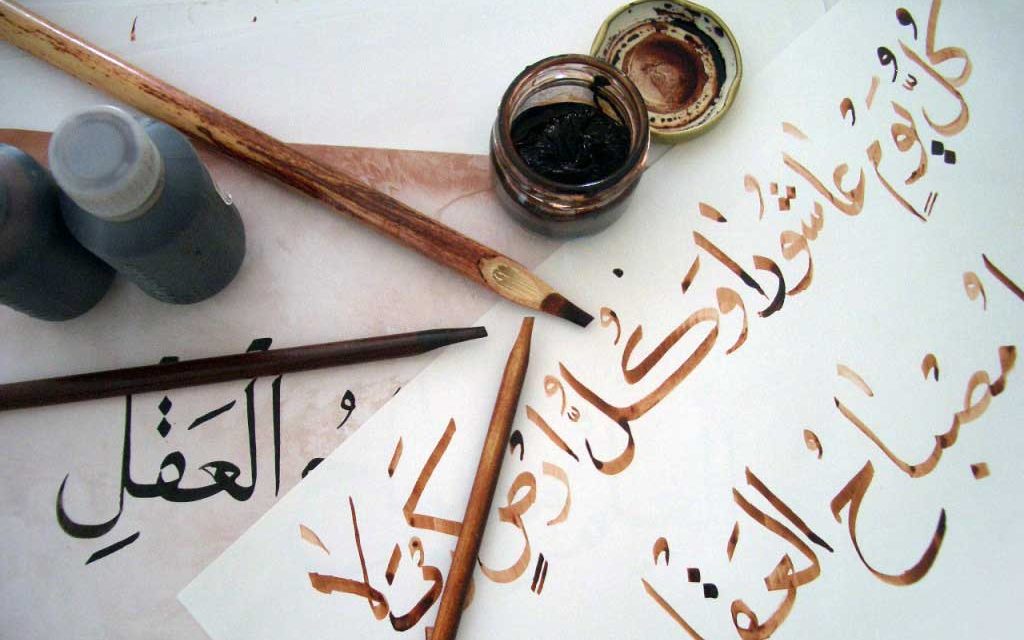 The work of a student of Arabic calligraphy, using bamboo pens (qalams) and brown ink, tracing over the teacher's work in black ink. (Photo: Aieman Khimji)

Apparently, some Islamophobes in the USA seem to be scared of the Arabic language.

While sane and insane voices exist in every society, it is common knowledge by now that Islamophobes are pretty loud in the West, especially in the USA. The story of Ahmed, the kid who brought a self-made clock to school, is a case in point. Of course, Islamophobia is not the dominant ideology in USA, as can be seen in the efforts of several good-willed Americans who seek nothing but peace. After all, Ahmed did get support and appreciation from all corners, didn’t he?

However, what happens when such Islamophobic paranoia, even though it might be in the minority, spills out and makes itself visible in stuff that is otherwise not a monopoly of Islam? What happens when one’s bigotry makes him/her feel scared of a language?

Apparently, some Islamophobes in the USA seem to be scared of the Arabic language.

Recently, a teacher at a school in Augusta County, Virginia handed out a homework assignment. The homework, part of the Geography curriculum, dealt with world religions. Among other exercises, it included a question asking students to copy Arabic calligraphy (in order to help them understand the complexity of calligraphy in the Arabic language).

It led to an angry backlash by several parents of students, as they felt it was an attempt to convert their kids to Islam. The school received multiple calls from angry parents, and some even demanded that the concerned teacher be fired from her job (note that the teacher did not frame the questions herself, but took it from a standard workbook on world religions).

Things kept getting ugly, with more hate-filled calls and messages coming in, and more parents reacting to the incident with threats. All the schools in the county had to be shut down, and then reopened amidst high security. Eventually, the question was eliminated from the workbook.

Thankfully, there were voices of sanity too, and some former students created a Facebook group to defend their geography teacher.

This is not the first time that Islamophobic paranoia in the USA resulted in bias against the Arabic language. Back in March 2015, a school near New York City had to apologize for including Arabic as one of the languages during its Foreign Languages Week celebration.

Clearly, Islamophobes would hate anything and everything, including the Arabic language. To help them realize just how poor their logic is, I decided to put together just a small fraction of things for which they should thank the Arabic language and its speakers.

Why Should They Not Hate Arabic?

What has the Arabic language or the Arabic script ever done to anyone? Here is small selection:

Need more? Yes, there is a lot more.

If Islamophobes want to turn their children away from the Arabic language because they feel it is related to Muslims, will they be turning their kids away from Trigonometry, Algebra, Chemistry, Pharmacy, and Medicine? Because all of these were, in some way or the other, invented and developed by Muslims.

Quite obviously, paranoia and religious bigotry knows no reason, and is purely illogical. Such ignorance needs to be fixed because, as shown in the references above, Arabic as a language has proven nothing but beneficial for human existence as a whole.