India’s Inclusion in Afghan Peace Process is a Necessity

As a regional power which has huge interests in Afghanistan’s stabilization, India should be included in the Afghan negotiation process.

Afghanistan and Pakistan have once again agreed on resumption of peace talks with the Taliban. During  visit of Pakistan’s Chief of Army Staff General Raheel Sharif to Kabul on December 27, it was agreed to form a joint mechanism to negotiate with reconcilable elements of the Taliban while taking strong action against the irreconcilable ones. In this regard, both countries demonstrated their willingness to persuade the Taliban for peace and reconciliation with the Afghan government. According to officials both in Kabul and Islamabad, a quadlitarial meeting will take place in Kabul in the second week of January. The resumption of the process provides another opportunity for Afghanistan as well as the regional states to pursue the path of negotiations with the Taliban in order to bring lasting peace to the country. Furthermore, this process is also in line with the aspiration of the Afghan people who have long desired for a dignified peace with their government’s armed oppositions. The countries that are involved in this round of peace talks or serve as observers are the United States, China, Pakistan, and Afghanistan. 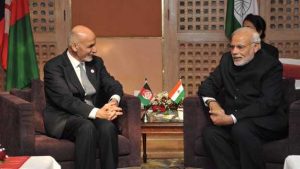 While these four countries’ participation maybe a nesseccity based on their role and importance as well as their involvements and interests in the current Afghanistan’s crises, they are certainly not sufficient. The dimensions of Afghanistan’s political and military problems involve other stakeholders; particularly India, a major regional power whose role is considered fundamental and therefore needs to be included in this vital process. India has been a historic friend of Afghanistan for many years and has invested enormously in the country’s peace and political development. In this vein, India has always supported a unified Afghanistan that includes the Taliban movement who are part of the Afghan society. Additionally, India’s involvement during the last decade have benefited the Afghan people from all walks of life because of its supports in several major political and economic projects. Moreover, the country has never been involved in the military operations against the Taliban during the last decade. However, it has provided arms to and trained Afghan security forces in its different civilian and military educational institutes. But that does not disqualify India from being a peace partner for the war-stricken Afghanistan.

It might be perceived that because of the Pakistani influence over the Taliban, India’s role may prove controversial in the peace dialogue. But as far as the Taliban are concerned, they do not oppose any specific regional partner in their talks with the Afghanistan government. This is because the Taliban want to be seen as a nationalist Afghan warriors who are fighting the foreign occupation. Most importantly, there are some high ranking personalities within the Taliban strategic leadership who have visited and studied in India. Specifically, one can name the current chief of the Taliban’s political office in Qatar, Sher Mohammad Abbas Stankekzai, who has studied in India. On the other hand, the Taliban have never publicly announced that they are opposed to the Indian presence in the peace process.

So far, what the Taliban have announced is that the group is  prepared to take part in the negotiations that are supported not only by  Afghans across the political spectrum and  represented by all ethnic groups, but also other concerned and serious regional stakeholders, which would definitely include India. In fact, this has been the Taliban’s shuttle diplomacy during the last decade of their fight against the Afghan and coalition forces. The group’s representatives have traveled to many capitals and taken part in different forums in order to talk to various governments and stakeholders. And there has never been any opposition either from the Afghan government or from the insurgency for India’s mediation in peace talks.  For these reasons, India’s role and importance as a major regional power, along with its contributions for peace and stability in Afghanistan, makes it a suitable candidate as a positive peace partner for Afghanistan. Hence, its inclusion is equally important as the United States and China’s is.

Therefore, the Afghan government must act independently and pave the way for India’s participation in the upcoming peace talks that are due to take place in Kabul soon. In the meantime, Afghanistan must also ensure that the peace process remains an inclusive Afghan-led dialogue that is intended to bring peace and stability not only in Afghanistan, but also to the region as a whole. To this end, it must seek the regional states sincere support for this vital process. It is because the continuation of the Taliban insurgency in Afghanistan will invite terrorists and extremists groups from all corners of the world to fight along their side and destabilize Afghanistan and the region. Thus, the participation of major regional countries such as India and others coupled with their positive role in the Afghan upcoming peace and reconciliation process is not only crucial for the prosperity and stability of Afghanistan, but also the entire region.