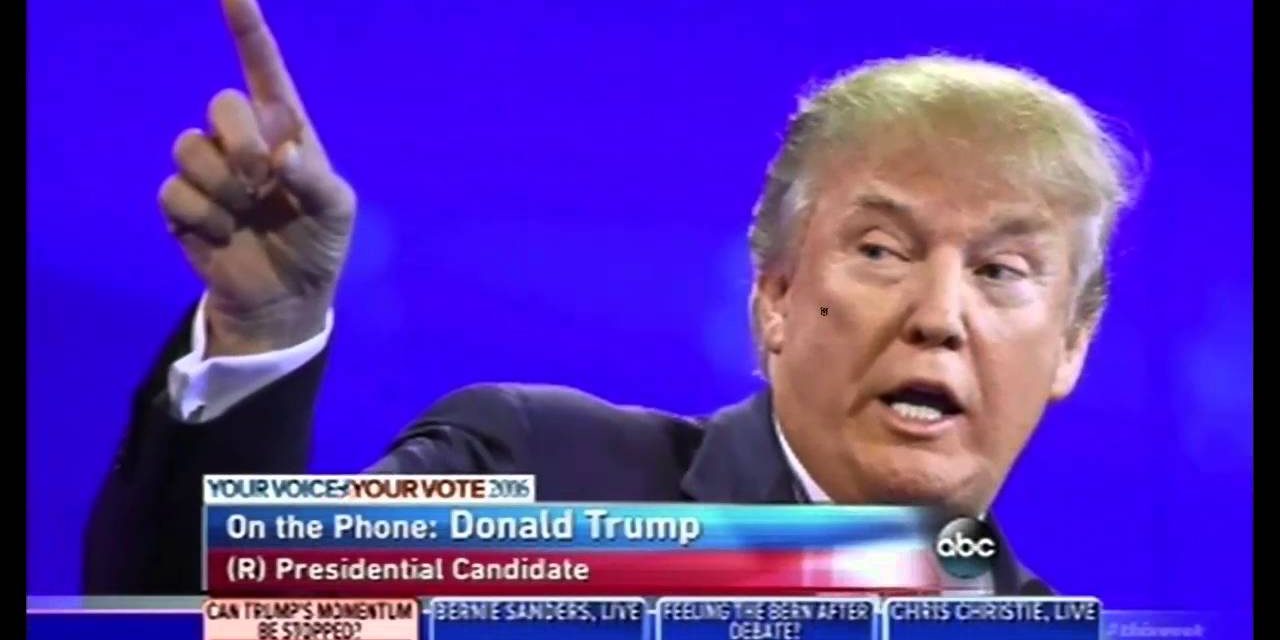 If Trump is elected, the establishment will prevail despite Trump.

Donald Trump, judging by polls as of December 21, 2015, is the most likely candidate to be the next president of the US.

Trump is popular not so much for his stance on issues as for the fact that he is not another Washington politician, and he is respected for not backing down and apologizing when he makes strong statements for which he is criticized.  What people see in Trump is strength and leadership.  This is what is unusual about a political candidate, and it is this strength to which voters are responding.

The corrupt American political establishment has issued a “get Trump” command to its presstitute media. Media whore George Stephanopoulos, a loyal follower of orders, went after Trump on national television.  But Trump made mincemeat of the whore.

Stephanopoulos tried to go after Trump because the world’s favorite leader, President Putin of Russia, said complimentary things about Trump, and Trump replied in kind.

According to Stephanopoulos, “Putin has murdered journalists,” and Trump should be ashamed of praising a murderer of journalists. Trump asked Stephanopoulos for evidence, and Stephanopoulos didn’t have any. In other words, Stephanopoulos confirmed Trump’s statement that American politicians just make things up and rely on the presstitutes to support invented “facts” as if they are true. Trump made reference to Washington’s many murders.

Stephanopoulos wanted to know what journalists Washington had murdered.  Trump responded with Washington’s murders and dislocation of millions of peoples who are now overrunning Europe as refugees from Washington’s wars.  But Trumps advisors were not sufficiently competent to have armed him with the story of Washington’s murder of Al Jazerra’s reporters.

Here is a report from AlJazeera, a far more trustworthy news organization than the US print and TV media:

“On April 8, 2003, during the US-led invasion of Iraq, Al Jazeera correspondent Tareq Ayoub was killed when a US warplane bombed Al Jazeera’s headquarters in Baghdad.

“The invasion and subsequent nine-year occupation of Iraq claimed the lives of a record number of journalists. It was undisputedly the deadliest war for journalists in recorded history.

“Disturbingly, more journalists were murdered in targeted killings in Iraq than died in combat-related circumstances, according to the group Committee to Protect Journalists.

“CPJ research shows that ‘at least 150 journalists and 54 media support workers were killed in Iraq from the US-led invasion in March 2003 to the declared end of the war in December 2011.’

“‘The media were not welcome by the US military,’ Soazig Dollet, who runs the Middle East and North Africa desk of Reporters Without Borders told Al Jazeera. ‘That is really obvious.’”

A political candidate with a competent staff would have immediately fired back at Stephanopoulos with the facts of Washington’s murder of journalists and compared these facts with the purely propagandistic accusations against Putin which have no basis whatsoever in fact.

The problem with Trump is the issues on which the public is not carefully judging him.  I don’t blame the public.  It is refreshing to have a billionaire who can’t be bought expose the insubstantiality of all the Democratic and Republican candidates for president.  A collection of total zeros.

Unlike Washington, Putin supports the sovereignty of countries. He does not believe that the US or any country has the right to overthrow governments and install a puppet or vassal.

Recently Putin said: “I hope no person is insane enough on planet earth who would dare to use nuclear weapons.”

Unfortunately for Putin and for Trump, if news reports can be believed, Trump recently said that he would use nuclear weapons against ISIS. This is a disqualifying statement.  There is no reason to need nukes to defeat a force as small as ISIS. More importantly, as the US is the only country to use nuclear weapons against the population of another country, for the US to do so again would confirm for the Russian and Chinese governments that the US government is insane, untrustworthy, and in need of extermination before Russia and China are attacked.  You cannot use nuclear weapons without consequence.

Recently I watched a video of a woman described as a “Trump advisor” who repeated neocon nazi William Kristol’s statement: “What’s the use of nuclear weapons if you can’t use them?”

How did a William Kristol neocon nazi get on Trump’s staff?  What more proof do we need that even if Trump is elected, the establishment will prevail despite Trump.

And most likely, the American Establishment would assassinate Le Pen and Farage and Corbyn before accepting change in France and the UK.

These are the facts on the ground.  How Russia and China deal with them remains to be seen.