Open Rafah Now: Siege on Gaza is a Cruel and Political Failure 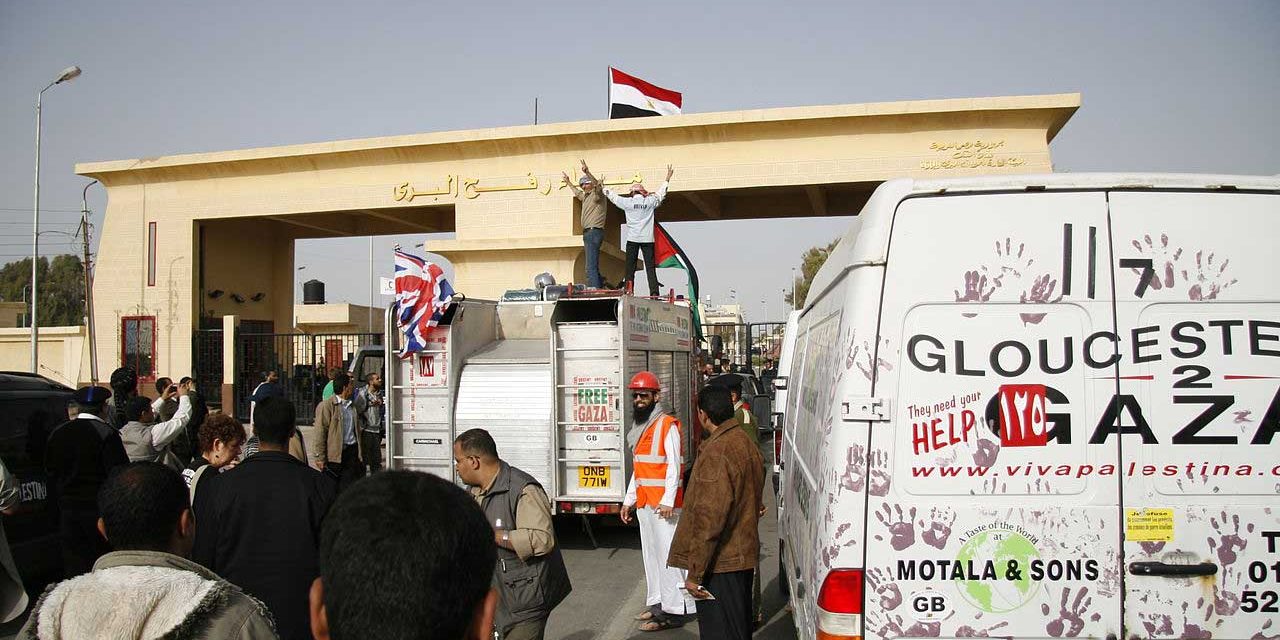 The Rafah border crossing between Egypt and the Gaza Strip. (Photo: gloucester2gaza)

An agreement must be reached to end Gaza’s perpetual suffering and open the border, once and for all.

When Egypt decided to open the Rafah border crossing which separates it from Gaza for two days, December 3 and 4, a sense of guarded relief was felt in the impoverished Strip. True, 48 hours were hardly enough for the tens of thousands of patients, students and other travelers to leave or return to Gaza, but the idea that a respite was on its way helped to break, albeit slightly, the sense of  collective captivity felt by entrapped Palestinians.

Of course, the Rafah border crisis will hardly be resolved by a single transitory decision, mainly because Gaza is blockaded for political reasons, and only a sensible political strategy can end the suffering there or, at least, lessen its horrendous impact.

Palestinians speak angrily of an Israel siege on Gaza, a reality that cannot be countered by all the official Israeli hasbara and media distortions. In fact, not only is it far worse than a blockade as an economic restriction but it is a constant violent process aimed at brutalizing, and punishing a community of 1.9 million people. However, the Egyptian closure of the Rafah border crossing, which has contributed to the ‘success’ of the Israeli siege is rarely discussed within the same context: as a political decision first and foremost.

In a border-related agreement that was reportedly signed mid-November between Palestinian Authority President, Mahmoud Abbas and Egypt’s Abdul Fatah al-Sisi, both sides seemed genial and unperturbed about the tragedy bubbling up north of the Egyptian border.

The ‘activities’ near Rafah were intended to “secure the border,” Sisi told Abbas, according to a statement issued by the Egyptian President’s office. These activities “could never be meant to harm the Palestinian brothers in the Gaza Strip.”

The term ‘activities’ here is, of course, a reference to the demolishing of thousands of homes alongside the 12-kilometer border between Rafah in Gaza and Egypt, in addition to the destruction and flooding of hundreds of tunnels, which have served as Gaza’s main lifeline that sustained the Strip throughout the Israeli siege during most of the last decade.

Abbas, of course, has no qualms about the Egyptian action, the result of which has been the closure of the Rafah crossing for 300 days in 2015 alone, according to a new study originating in Gaza.

Last year, in an interview with Egypt’s ‘Al-Akbar’ newspaper, Abbas said that the destruction of the tunnels was the best solution to prevent Gazans from using the smuggling business for their own benefits. He then spoke about 1,800 Gazans becoming millionaires as a result of the tunnel trade, although no corroboration for this specific number was ever divulged.

Of course, Abbas has rarely been concerned about the rising fortunes of the alleged ‘millionaires’, because his Authority, which subsists on international handouts, is rife with them. His grievance is with Hamas, which has been regulating tunnel trade and taxing merchants for the goods they import into the Strip. Not only were the tunnels a lifeline for Gaza’s economy, the underground business helped fill a void in Hamas’ own budget, a fact that has irked Abbas for years.

Following Hamas’ election victory in January 2006 and the bloody clash between the new Government and Abbas’s Fatah faction, Hamas has experienced immense pressure: Israel launched three massive and deadly wars, while maintaining a strict siege; Egypt ensured the near permanent closure of its border; and Abbas continued to pay the salaries for tens of thousands of his supporters in Gaza, on the condition that they did not join the Hamas Government.

Moreover, the so-called ‘Arab Spring’, the turmoil in Egypt and the war in Syria, in particular, lessened Hamas’ chances of escaping the financial stranglehold that made governing Gaza, broken by war and fatigued by the siege, nearly unviable.

While Israel, from the outset, explained that its siege was based on security requirements, Egypt eventually did the same, alleging that destroying the tunnels, demolishing homes and enlarging the buffer zone were necessary steps to stave off the flow of weapons from Gaza to Sinai’s militants who are responsible for deadly attacks on the Egyptian army.

Oddly, the Egyptian logic is the exact opposite of the Israeli logic, upon which the siege was justified in the first place.  Israel claims that Gaza’s factions use the tunnels to smuggle weapons and explosives from Sinai, not the other way around.

Indeed, allegedly smuggling weapons from Gaza to Sinai has little to do with the closure of Rafah or even the destruction of the tunnels.

With American expertise and aid, Egypt began erecting a steel wall along the Gaza border as early as December 2009. This preceded the Egyptian revolution and the political chasm in that society which was followed by the militant chaos. Indeed, there was little violence in Sinai then, at least, not one blamed partly on Palestinians. The construction of the wall took place during the rule of Hosni Mubarak in order to accommodate Israeli-American pressure to contain Hamas and other fighting groups. Abbas, eager to see the demise of his rivals, was in agreement, as he remains until today, ever ready to entertain any ideas that would once more give rise to his Fatah party in the Strip.

The militant violence in Sinai did not usher in the siege on Gaza, but only hastened the demolishing of homes, destruction of tunnels and provided further justification for the permanent closure of the border.

Life in Gaza became impossible, to the extent that the UN Conference on Trade and Development released a report last September warning that Gaza could become ‘uninhabitable’ in less than five years, if current economic trends continue.

But these economic trends are the result of intentional policies, mostly centered at achieving political ends. Moreover, none of these ends have been achieved after nearly a decade of experimentation. True, many have died as they waited to receive proper medical care and thousands perished in war; many of the maimed cannot even acquire wheelchairs, let alone prosthetics, but neither has Israel managed to stop the Resistance, Egypt quell the rebellion in Sinai nor has Abbas regained his lost factional stronghold.

Yet, things are getting much worse for Gaza. The World Bank issued a report earlier this year stating that 43% of Gaza’s population are unemployed, and that unemployment among the youth has reached 60%. According to the report, these unemployment figures are the highest in the world.

Since the establishment of the border between Palestine and Egypt following an agreement in 1906 between the Ottoman Empire—which controlled Palestine then—and Britain, which controlled Egypt, never was the border subject to such deadly political calculations. In fact, between 1948 and 1967, when Gaza was under Egyptian control, the border was virtually non-existent as the Strip was administered as if a part of Egypt.

Although Gazans are still being referred to as ‘brothers’, there is nothing brotherly in the way they are being treated. 25,000 humanitarian cases are languishing in Gaza, waiting to be allowed access to treatment in Egypt or in other Arab and European countries. These ill Palestinians should not be used as political fodder in a turf war which is not of their making.

Moreover, while countries have the right to protect their sovereignty and security, they are obligated by international law not to collectively punish other nations, no matter the logic or the political context.

An agreement must be reached between the Government in Gaza and Egypt, with the help of regional powers and under the monitoring of the United Nations, to end Gaza’s perpetual suffering and open the border, once and for all.