Remaking the Middle East: How the US Grew Tired and Less Irrelevant 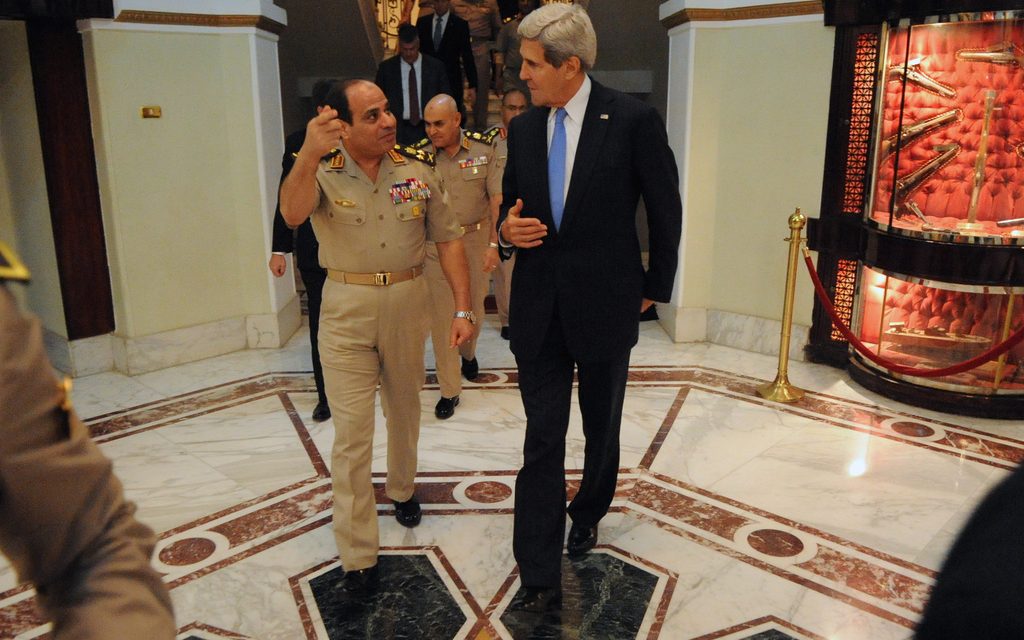 Egyptian Minister of Defense General Abdul Fatah Khalil al-Sisi bids farewell to U.S. Secretary of State John Kerry after a meeting in Cairo, Egypt on November 3, 2013. (US Department of State)

For now, the Middle East will continue to pass through this incredibly difficult and violent transition, for which the US is partly responsible.

US Secretary of State, John Kerry, is often perceived as one of the ‘good ones’—the less hawkish of top American officials, who does not simply promote and defend his country’s military adventurism but reaches out to others, beyond polarizing rhetoric.

His unremitting efforts culminated partly in the Iran nuclear framework agreement in April, followed by a final deal, a few months later. Now, he is reportedly hard at work again to find some sort of consensus on a way out of the Syria war, a multi-party conflict that has killed over 300,000 people. His admirers see him as the diplomatic executor of a malleable and friendly US foreign policy agenda under President Obama.

In reality, this perception is misleading; not that Kerry is the warmonger as were George W. Bush’s top staff, such as Vice-President Dick Cheney and Secretary of Defense, Donald Rumsfeld. The two were the very antithesis of any rational foreign policy such that even the elder George H. W. Bush described them with demeaning terminology, according to his biographer, quoted in the New York Times.

Cheney was an “Iron-ass”, who “had his own empire  … and marched to his own drummer,” H.W. Bush said, while calling Rumsfeld “an arrogant fellow” who lacked empathy.

Yet, considering that the elder Bush was rarely a peacemaker himself, one is left to ponder if the US foreign policy ailment is centered on failure to elect proper representatives and to enlist anyone other than psychopaths?

If one is to fairly examine US foreign policies in the Middle East, for example, comparing the conduct of the last three administrations, that of Bill Clinton, George W. Bush and Barack Obama, one would find that striking similarities are abundant. In principle, all three administrations’ foreign policy agendas were predicated on strong militaries and military interventions, although they applied soft power differently.

In essence, Obama carried on with much of what W. Bush had started in the Middle East, although he supplanted his country’s less active role in Iraq with new interventions in Libya and Syria. In fact, his Iraq policies were guided by Bush’s final act in that shattered country, where he ordered a surge in troops to pacify the resistance, thus paving the way for an eventual withdrawal. Of course, none of that plotting worked in their favor, with the rise of ISIS among others, but that is for another discussion.

Obama has even gone a step further when he recently decided to keep thousands of US troops in Afghanistan well into 2017, thus breaking US commitment to withdraw next year. 2017 is Obama’s last year in office, and the decision is partly motivated by his administration’s concern that future turmoil in that country could cost his Democratic Party heavily in the upcoming presidential elections.

In other words, US foreign policy continues unabated, often guided by the preponderant norm that ‘might makes right’, and by ill-advised personal ambitions and ideological illusions like those championed by neo-conservatives during W. Bush’s era.

Nevertheless, much has changed as well, simply because American ambitions to police the world, politics and the excess of $600 billion a year US defense budget are not the only variables that control events in the Middle East and everywhere else.

There are other undercurrents that cannot be wished away, and they too can dictate US foreign policy outlooks and behavior.

Indeed, an American decline has been noted for many years, and Middle Eastern nations have been more aware of this decline than others. One could even argue that the W. Bush administration’s rush for war in Iraq in 2003 in an attempt at controlling the region’s resources, was a belated effort at staving off that unmistakable decay—whether in US ability to regulate rising global contenders or in its overall share of global economy.

The folly of W. Bush, Cheney and company is that they assumed that the Pentagon’s over $1.5 billion-a-day budget was enough to acquire the US the needed leverage to control every aspect of global affairs, including a burgeoning share of world economy. That misconception carries on to this day, where military spending is already accounting for about 54 percent of all federal discretionary spending, itself nearly a third of the country’s overall budget.

However, those who are blaming Obama for failing to leverage US military strength for political currency refuse to accept that Obama’s behavior hardly reflects a lack of appetite for war, but a pragmatic response to a situation that has largely spun out of US control.

The so-called ‘Arab Spring’, for example, was a major defining factor in the changes of US fortunes.  And it all came at a particularly interesting time.

First, the Iraq war has destroyed whatever little credibility the US had in the region, a sentiment that also reverberated around the world.

Second, it was becoming clear that the US foreign policy in Central and South America—an obstinate continuation of the Monroe Doctrine of 1823, which laid the groundwork for US domination of that region—has also been challenged by more assertive leaders, armed with democratic initiatives, not military coups.

Third, China’s more forceful politics, at least around its immediate regional surroundings, signaled that the US traditional hegemony over most of East and South East Asia are also facing fierce competition.

Not only many Asian and other countries have flocked to China, lured by its constantly growing and seemingly more solid economic performance, if compared to the US, but others are also flocking to Russia, which is filling a political and, as of late, military vacuum left open.

The Russian military campaign in Syria, which was half-heartedly welcomed by the US, has signaled a historic shift in the Middle East. Even if Russia fails to turn its war into a major shift of political and economic clout, the mere fact that other contenders are now throwing their proverbial hats into the Middle East ring, is simply unprecedented since the British-French-Israeli Tripartite Aggression on Egypt in 1956.

The region’s historians must fully understand the repercussions of all of these factors, and that simply analyzing the US decline based on the performance of individuals—Condoleezza Rice’s hawkishness vs. John Kerry’s supposed sane diplomacy—is a trivial approach to understanding current shifts in global powers.

It will take years before a new power paradigm fully emerges, during which time US clients are likely to seek the protection of more dependable powers. In fact, the shopping for a new power is already under way, which also means that new alliances will be formed while others fold.

For now, the Middle East will continue to pass through this incredibly difficult and violent transition, for which the US is partly responsible.