The Costs of Political Centralization in Afghanistan 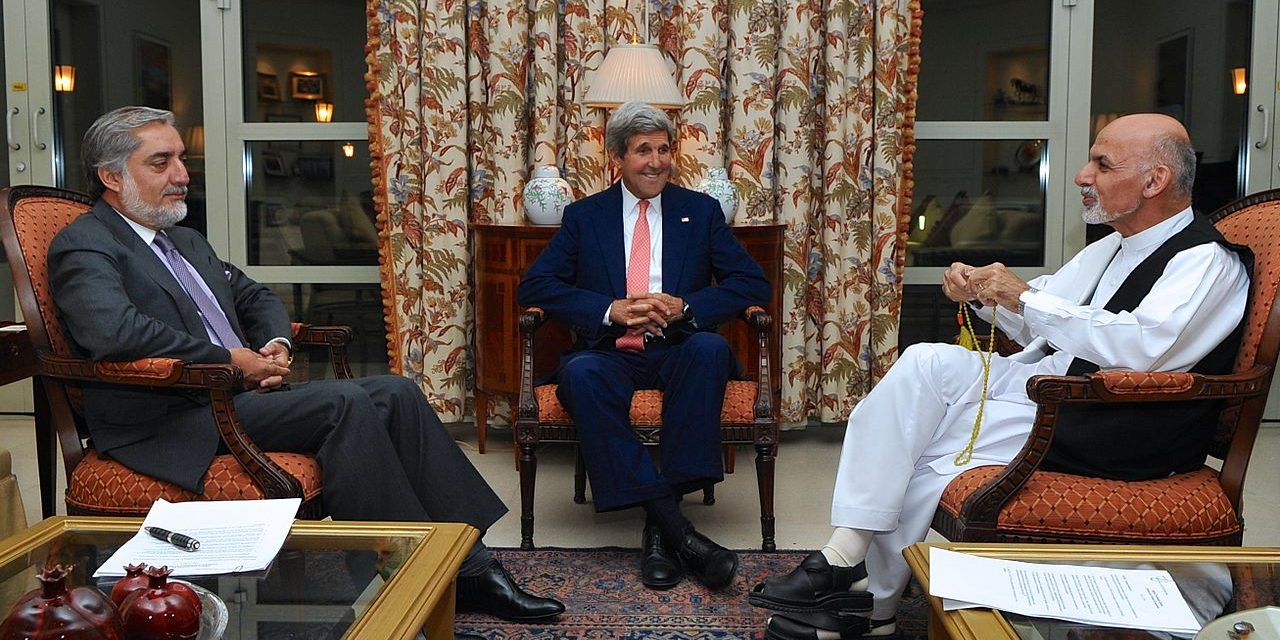 U.S. Secretary of State John Kerry sits with Afghan presidential candidates Abdullah Abdullah, left, and Ashraf Ghani, right, at the U.S. Embassy in Kabul, Afghanistan on July 12, 2014, after he helped broker an agreement on a technical and political plan to resolve the disputed outcome of the election between them. (US Department of State)

When members at the Loya Jirga (Grand Council) approved Afghanistan’s new constitution in 2004, the delegates representing all levels of society had hoped that the relatively liberal-Islamic constitution would serve as a basic framework for consolidating strong and representative state structures. The development had followed the roadmap to establish new permanent government institutions, outlined in the Bonn Conference in December 2001. Unlike other post-war countries where the constitutions were laid down to settle broad social, political, economic and ethnic issues, Afghanistan either overlooked or failed to address them. While the new constitution was considered a milestone towards free and fair elections, it ignored a central issue which had always haunted Afghanistan’s political system: The highly centralized presidential system with dictatorial power in the hand of the President

Under Afghanistan’s current presidential system, political power is highly concentrated in the president’s office, leaving regional officials with little political, administrative or financial authority. Provincial governors are appointed by the president and council leaders are not elected officials. The foundation of the new political order, based on a centralized state given Afghanistan’s geography and polity, was problematic from the very start. As proved later,  a highly powerful presidential system has been detrimental for Afghanistan and its political future.

There is now a consensus within and outside Afghanistan that the idea of centralization was potentially a major strategic blunder for the new Afghan political structure. The reason is that the highly centralized model that was chosen for Afghanistan has neither served the people nor the government itself. Given Afghanistan’s multi-ethnic society along with its diverse political realities, the centralized political system has further deepened the crisis and led to political turmoil and instability. One of the main fallouts of the system were the past presidential elections of 2004, 2009 and 2014 that remained contentious due to the centrality of power.

Arguably, if the Afghan political system had been decentralized with reasonable administrative and executive power to other institutions, the democratic transition would have been smoother. However, due to the excessive political power in an all-encompassing presidency, the political atmosphere has visibly vitiated, causing great political tensions. It is tussle for presidency that provides impetus to the candidates and their supporters to adopt fraudulent strategies to win the elections. As this occurred in the two stints of former President Hamid Karzai who significantly influenced the elections, and manipulated the results in his favor. It was because of his unchecked power and enormous political clout, without judicial and legislative oversight, that rendered the previous elections controversial. While the very reason behind the idea of centralization after the fall of the Taliban regime was to keep the country strong and united, it has proven otherwise based on the experiences of the last decade. Moreover, in a country such as Afghanistan which is lacking a high political culture, centralization has failed to bring peace and stability that the country desperately needs. Recently, the effectiveness of National Unity Government (NUG) has also suffered unforeseen setbacks due to this political centralization. The NUG which was formed following the last year’s disputed elections did not produce any winner. Despite the fact the elections did not grant uncontested authority to any of the candidates, the political camp of Mr. Ashraf Ghani has sought to hold onto power. This has, in turn, created a lack of confidence and cooperation between the Chief Executive Mr. Abdullah and President Ashraf Ghani as the two main leaders of the NUG.

Another reason that the NUG is unable to perform and demonstrate achievements to its own people and the international community is because of the centrality of the power. Too much concentration of authority within the presidential palace has led to the relegation of key ministers such as Defense and Interior whose authority has been significantly curtailed. This has further added to mistrust among the leaders of the national unity government particularly in administrative tasks and appointments of the senior officials. These developments are taking place at a time when good governance in order to stabilize the country is most needed. That is only possible through a stable political system with greatest representation that can serve the people. Political stability remains the major prerequisite for the security and economic development of Afghanistan. Without a stable political system that can deliver for the people, the country will never achieve the envisioned peace and prosperity.

Therefore, the optimum solution for a politically secure and economically stable Afghanistan, that is not only important for the security and prosperity of its own but also for the region, is devolution of political power. As noted, centralization has been at odds with Afghanistan’s social, political and economic realities and has not brought stability thus far. Hence, a decentralized system would ensure that provincial governors are independent, their councils are legislative, and that they are elected officials by the people. This would lead to good governance and successful exercise of power in close cooperation with local and tribal leaders in 34 provinces nation-wide. Likewise, constitutional amendment that entails creation of a prime ministerial position has become the urgent need of time. That would be a step in the right direction towards decentralization and – concomitantly – a strong, sustainable and representative democracy.