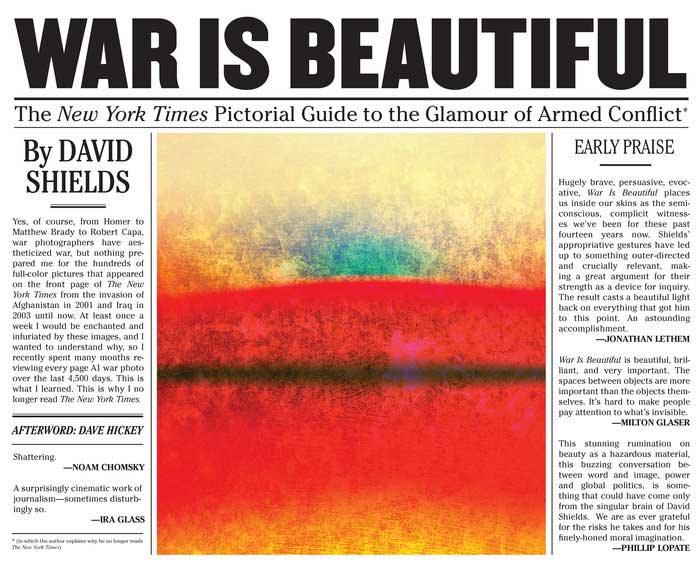 David Shields has captured a portrait of a day in the life of a war propagandist.

The author of this remarkable book, David Shields, has selected color war photographs published on the front page of the New York Times over the last 14 years. He’s organized them by themes, included epigrams with each section, and added a short introduction, plus an afterword by Dave Hickey.

Some of us have long opposed subscribing to or advertising in the New York Times, as even peace groups do. We read occasional articles without paying for them or accepting their worldview. We know that the impact of the Times lies primarily in how it influences television “news” reports.

But what about Times readers? The biggest impact that the paper has on them may not be in the words it chooses and omits, but rather in the images that the words frame. The photographs that Shields has selected and published in a large format, one on each page, are powerful and fantastic, straight out of a thrilling and mythical epic. One could no doubt insert them into the new Star Wars movie without too many people noticing.

The photos are also serene: a sunset on a beach lined with palm trees — actually the Euphrates river; a soldier’s face just visible amid a field of poppies.

We see soldiers policing a swimming pool — perhaps a sight that will someday arrive in the Homeland, as other sights first seen in images from foreign wars already have. We see collective military exercises and training, as at a desert summer camp, full of camaraderie in crises. There’s adventure, sports, and games. A soldier looks pleased by his trick as he holds a dummy head with a helmet on the end of a stick in front of a window to get it shot at.

War seems both a fun summer camp and a serious, solemn, and honorable tradition, as we see photos of elderly veterans, militaristic children, and U.S. flags back Home. Part of the seriousness is the caring and philanthropic work exhibited by photos of soldiers comforting the children they may have just orphaned. We see sacred U.S. troops protecting the people whose land they have been bombing and throwing into turmoil. We see our heroes’ love for their visiting Commander, George W. Bush.

Sometimes war can be awkward or difficult. There’s a bit of regrettable suffering. Occasionally it is tragically intense. But for the most part a rather boring and undignified death about which no one really cares comes to foreigners (outside the United States there are foreigners everywhere) who are left in the gutter as people walk away.

The war itself, centrally, is a technological wonder bravely brought out of the goodness of our superior hearts to a backward region in which the locals have allowed their very homes to turn to rubble. An empty settlement is illustrated by a photo of a chair in a street. There are water bottles upright on the ground. It looks as though a board meeting just ended.

Still, for all war’s drawbacks, people are mostly happy. They give birth and get married. Troops return home from camp after a good job done. Handsome Marines innocently mingle with civilians. Spouses embrace their camouflaged demigods returned from the struggle. A little American boy, held by his smiling mother, grins gleefully at the grave of his Daddy who died (happily, one must imagine) in Afghanistan.

A few of those things may show up now and then in the New York Times, more likely on a page other than the front one. Some of those things you may not want to see with your breakfast cereal. But there can be no question that Shields has captured a portrait of a day in the life of a war propagandist, and that the photographers, editors, and designers involved have done as much to cause the past 14 years of mass dying, suffering, and horror in the Middle East as has any single New York Times reporter or text editor.