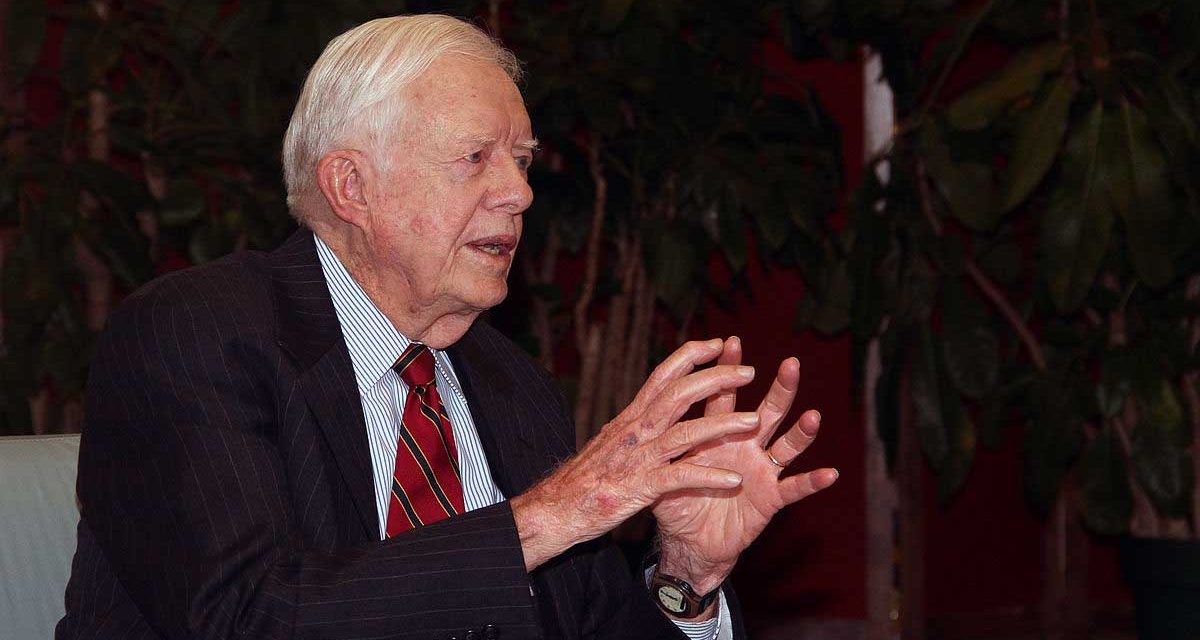 Jimmy Carter at the LBJ Library on February 15, 2011 (US National Archives)

As former President Jimmy Carter recently said, America is no longer a democracy.  America is an oligarchy.

Caught with its pants down in Syria, the US government is making a fool of itself.  By attempting to mischaracterize Russia’s actions against ISIS in Syria, Washington has admitted that the terrorists from outside Syria, who are attempting to overthrow the elected government of Syria, are “our guys.”

In an interview with Fox “News,” a senior US government official said:  “Putin is deliberately targeting our forces. Our guys are fighting for their lives.”

The defense official told Fox “News” that the Russians are “completely disingenuous about their desire to fight ISIS.”  According to the Obama regime, all of the hundreds of Russian air and missile attacks against ISIS are directed at US trained terrorists — all five of them — and their hundreds of Western advisors.

Evidently, the senior defense official forgot that General Lloyd Austin, who heads US Central Command, recently told the Senate Armed Services Committee that only 4 or 5 of the US-trained “moderate terrorists” remain on the battle field.  Obama has cancelled the failed $500 million waste of US taxpayers money to train “moderate terrorists” to overthrow the Syrian government. The trainees took the money and ran.

It is difficult to believe that even the incompetents who work for Fox “News” could really think that the Russians made hundreds of air strikes, supplemented with cruise missile strikes, against 4 or 5 moderate terrorists.  But the stupidity and ignorance of Fox “News” knows no limits.  (The most discouraging aspect of my existance is the knowledge that millions of dumbshit Americans sit before Fox “News” for their daily brainwashing.)

But that is the story that senior US government officials are leaking to a gullible, or paid for, Fox “News.”

The truth of the matter—which will never emerge from Fox “News”— is that Washington is using ISIS in an illegal attempt to overthrow an elected government that will not submit to being a Washington puppet.

In clear words, Washington in total violation of law is behaving as a war criminal and is attempting to overthrow an elected government in order to replace it with a vassal answering to Washington.

President Putin has said that Russia will not stand for any more war crimes from Washington in areas of the world that affect Russian national interests.  Russia has been asked for assistance by the legitimate government of Syria against ISIS, and the Russian air strikes are exterminating ISIS.  This has the Washington war criminals upset.  The senior US defense official told Fox “News” that the only role for Russia in Syria is to assist the US in overthrowing Assad.  I guess the dumbshit Washington official didn’t hear what Putin had to say.

The question that desperately needs to be asked will never be asked by the US print and TV media or by NPR.  That question is: What is the point of the incessant US government lies about Russia, its actions, and its intentions?  Are the warmongers in Washington trying to start World War Three?

Obviously the presidential candidates—both Hillary and all of the Republican dimwits—are determined to start World War Three.  Watch the Americans vote for World War Three in the next election.

The United States government no longer has any credibility outside its borders and very little within, as evidenced by recent polls that show that 62 percent of American voters are wishing for a third party in the hopes that it might represent the people instead of a half dozen vested interests that, thanks to the Republican Supreme Court, have purchased the US government, lock, stock and barrel.

The reason so many voters admire Bernie Sanders and Donald Trump, even though both have no idea what really needs to be done, is that these two are the only candidates who are raising a fuss about a political system that serves only a few.  Talk about dictators and disenfranchisement; the American voters are the most disenfranchised in human history.  Allegedly the US is a democracy, but there is no sign of democracy in the behavior of the government. Sound and careful studies show that the US voter has no input whatsoever into the behavior and decisions of the US government.  The US government is as far removed from the people, if not more so, than any dictatorship.  We desperately need to be liberated outselves!

As former President Jimmy Carter recently said, America is no longer a democracy.  America is an oligarchy.

Like so many things Carter was right about, but never given credit for by the corrupt American Establishment, Carter is again correct.

I say bring back Jimmy Carter.  The man is moral and intelligent.  He is a million times better than any presidential candidate in the running. At 90 years of age in a losing war with cancer, Jimmy Carter is our best bet.