Hopefully, Justin Trudeau will demonstrate through actions what his words have indicated should occur.

Winning a significant victory, Justin Trudeau, son of former Prime Minister Pierre Elliott Trudeau, replaced the neoconservative Stephen Harper as Canada’s Prime Minister elect. For Canada it was a long election process, about twice as long as is usually provided. It allowed Trudeau to demonstrate that he was a perfectly capable debater, and that he had policy options that were in some ways very different from Harper—in particular, acknowledging that he would run a deficit for the first three years, a move that also took him to the left of the New Democratic Party. 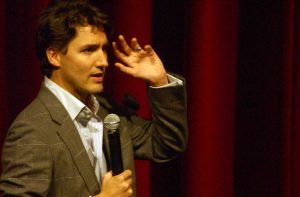 Justin Trudeau speaking in front of a packed crowd at the Humanities Theatre at the University of Waterloo in March 2006. (Mohammad Jangda)

There will be changes in both substance and style, but how large they are is yet to be seen. Domestically, there will be some financial tinkering and theoretically some significant rollbacks, but the underlying pro-business basis of Liberal policy will likely run true to form. Foreign policy will present—if electioneering promises are fulfilled—a return to a kinder, friendlier peacekeeper image and role, rather than the belligerency of the Harper regime.

Domestic policies dominated the course of the election. While the main arguments were concerning the budget, the economy, and jobs, the actual vote indicates that personality and presentation played a very significant role in voters’ decisions. The Liberals made various promises to the electorate, admitting that the first budgets will be deficit budgets, going against the grain of neoliberal economic policies seen elsewhere.

There will be some tinkering with some “middle class” catchers: income splitting redefined; CPP age lowered back to 65; limits redefined on tax free savings account (not much worry with rates nearing zero anyway). Some bills will be revoked (“Fair Election Act”) and some will hopefully be revoked or highly modified (Bill C51—Security, et al); renewal of the CBC and Post Canada; renewal of the Navigable Waters Protection Act; a reinvigoration of science based decisions over ideology.

Those areas do not have an impact on foreign policy, but a couple of big ticket items—the tar sands/pipelines arguments and the TPP trade agreement have strong components with both domestic and foreign policy.

The tar sands are significant for the upcoming Paris environmental talks, and for the economic and environmental arguments internally and with the U.S. Will Obama ‘gift’ the Keystone to Trudeau, allowing him to make decisions concerning Canada’s role in developing—or not—the resource? Harper of course would claim credit for this as in his usual arrogance he told the U.S. he would not take “no” as an answer. (What would we do, invade the U.S.? Sanction the U.S.? Mr. Harper did not live in the real world.)

The Northern gateway pipeline will more than likely not go through if Trudeau’s messages to the local Indians is carried through. That pipeline intended to haul tar sands to the Pacific Rim countries would have to traverse thousands of kilometers of unceded Indian land.

Trudeau indicated that he is for trade, but would not comment on the TPP until he is able to read what it actually involves. Within Canada there are concerns from two specific industries, the dairy industry and the automobile industry. Other concerns include the power of big pharma companies, but the largest concern should be the corporate role as prosecutor, judge and jury in economic impacts of sovereign laws and regulations. Environmental protections could prove costly in favor of the multilateral corporations if the TPP goes through without amendment.

That leads into the upcoming environmental/climate change meeting in Paris from November 30 to December 11 this year. Trudeau has indicated at least that Canada will present a more accommodating approach compared to the hostile rhetoric of the Harper neocons over the past ten years. What that actually will work out as is, as always, yet to be seen.

In his first post-election news conference, he indicated that he had already told Obama about recalling Canada’s six fighter jets from the region. A good move, but it becomes more complicated with whatever is decided about ‘training’ roles. Under Harper Canada was supposedly ‘training’ Kurdish fighters, until it was discovered they were involved in active combat missions. The lingering question there is will they still be ‘training’ or will they truly be only in a support role.

This of course is complicated with the Kurds being supportive of and wanting more Russian support. Harper was vociferously and arrogantly opposed to Russia; Trudeau echoed that while campaigning, but whether that remains as policy or was just election vote rhetoric remains to be seen. Harper swore to never recognize Crimea as part of Ukraine; Trudeau did not go quite that far but still labelled Russia as an aggressor.

Another complication is—as noted in a previous article—Canada and Israel became strangely quiet once Russia entered into active counter terror operations within Syria—and notably after Netanyahu visited Moscow. The big question is then, what will Canada’s position be in relation to Russia in Syria, to the silence of Israel and its ongoing settlement policy and Gaza invasion policy; and further what will Canada’s position be in Ukraine, where there are more ‘training’ forces working with the new neonazi government of Poroshenko?

Justin Trudeau strongly dislikes political comparisons to his father, but P.E. Trudeau was not antagonistic to the Russians, nor the Cubans, nor the Chinese, but believed in full dialogue and interaction with these countries. Justin would be wise to emulate his father in this particular case. Tied into this as well are the idiotic sanctions made by Harper against Russia; Trudeau would do well to revoke those.

Add to the list Tehran and its recent acceptance of the nuclear agreement that was brokered in good part by the Russians. Will Canada re-establish its embassy in Tehran on the simple basis of Canada being a nation more open to dialogue, communication, and finding common points of interaction. It is also well to note the strengthening of Iran’s position in Iraq and Syria, acting in concert with the Russians, as well as aligning themselves economically with Russia and China in the New Silk Road across Eurasia.

Israel presents another awkward political situation. Harper went silent at the same time that Netanyahu did, indicating that more than likely he was taking orders from Israel. Will Trudeau follow suit or will he at least tone down the rhetoric if not change it altogether? Or will silence be the simplest easiest route here?

Finally, for the U.S. the big decisions will involve the TPP, whom many U.S. politicians are aligning against, and the tar sands with proponents on both sides of the debate for or against. A much easier decision will involve the F-35 fighter jet, set to be scrapped as Canada’s next generation fighter. With the impressive display of finesse, accuracy, serviceability, interoperability, and performance in Syria, perhaps we should be buying the Sukhoi line of jets—just suggesting….

In general, the world should be able to look forward to a more tolerant, kinder Canadian attitude than during the Harper regime. As Justin Trudeau said in his first press conference, “I want to say this to this country’s friends around the world: Many of you have worried that Canada has lost its compassionate and constructive voice in the world over the past 10 years. Well, I have a simple message for you on behalf of 35 million Canadians. We’re back.” (“Canada to end airstrikes in Syria and Iraq, new prime minister Trudeau says,” The Guardian, October 21, 2015.)

For me it will be very pleasurable to see Trudeau shake Putin’s hand at the upcoming G-20 meeting in Antalya, Turkey—hmmm…conveniently located between Syria and the European departure point for refugees to Lesbos, Greece. This should be a revealing summit, to see how Canada, along with the rest of the imperial west, meet and discuss events that are occurring so close at hand. The west may continue its anti-Russia rhetorical nonsense, but the rest of the world, the majority of the world, are supportive of Russia’s role in the region. U.S. policy has been a failure, but that is another commentary beyond this.

Not that Canada has been ideal in its global commitments. It has generally sided with U.S. imperial attitudes around the world. Canada has strongly supported its mining interests creating problems and discord in many countries in particular in Latin America. Hopefully, with Justin Trudeau’s comments about a kinder Canada, and about looking at the source of problems rather than reacting militaristically to any and all problems as per Harper, perhaps there will be some overlap in other areas where Canada has interests.

In the meantime, yes, we are back with the Harper regime strongly defeated. Justin Trudeau will have a honeymoon period for a while; hopefully he will demonstrate through actions what his words have indicated should occur.