Saudi Arabia, Royal Impunity, and the Quicksand of Special Relationships

The US’s “special relationship” with Saudi Arabia lends the Saud regime impunity for its criminal behaviors.

Saudi Arabia enjoys a spectacular level of impunity from international accountability. This is not only because it a powerful monarchy or has the world’s richest and largest royal family with influence spread far and wide. And it is not even just about oil, although having a quarter of the world’s pre-fracking energy reserves still engenders utmost deference from those many modern economies that will depend on Gulf oil and gas for as long as this precious black stuff lasts. The Saudi comfort zone is also sustained by its special relationship with the United States that provides geopolitical backing of great benefit. 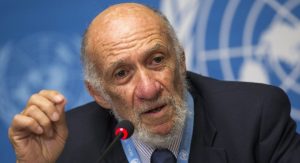 This refusal to hold Saudi Arabia accountable for upholding law and morality raised mainstream eyebrows that have usually looked the other way when it came to the Saudi record on human rights. Recently electing Saudi Arabia to the UN Human Rights Council (HRC), partly due to a secret vote swap with the UK, seemed to cross a hereto invisible line. And if that was not enough of an affront to cosmetic morality in the sphere of human rights, the Saudi UN ambassador has been recently selected to chair the influential HRC consultative panel that recommends to the President of the Council a short-list of whom shall be appointed as Special Rapporteurs, including on such issues as right to women, freedom of expression, and religious freedom.

This news is coupled with confirmation that Saudi Arabia has inflicted more beheadings than ISIS this year, over two a day, and has ordered Ali Mohammed al-Nimr to be executed by crucifixion for taking part in an anti-monarchy demonstration when he was 17. In a second representative case, the popular blogger, Raif Badawi, was sentenced to a long prison term and 1,000 lashes in public for criticizing the monarchy. This behavior resembles the barbarism of ISIS more than it exhibits qualifications to occupy senior UN positions dealing with human rights.

Additionally, Riyadh like Damascus, seems guilty of severe war crimes due to its repeated and indiscriminate targeting of civilians during its dubious Yemen intervention. The worst incident of late was an air strike targeting a wedding party on September 29, killing 131 civilians, including many women and children, but the overall pattern of the Saudi military onslaught has been oblivious to the constraints of international humanitarian law as embodied in the Geneva Conventions of 1949.

The Saudi mismatch between stature and behavior cannot be considered, as it appears to be, a grotesque anomaly in the global normative order. Instead, it fits neatly into a coherent geopolitical pattern. Ever since World War II Saudi Arabia has been an indispensable strategic asset for the West. Oil is the core explanation of this affinity, but it is far from the whole story. Earlier Saudi anti-Communism was important, a kind of health insurance policy for the West that the government would not lured into the Soviet orbit or adopt a non-aligned position in the manner of Nasser’s Egypt, which would have dangerously undermined energy security for Western Europe.

In recent years, converging patterns of extreme hostility toward Iran that Saudi Arabia shares with Israel has delighted Washington planners who had long been challenged by the difficulty of juggling unconditional support for Israel with an almost absolute dependence of the West on keeping Gulf oil flowing at affordable prices. This potential vulnerability was vividly revealed in the aftermath of the 1973 Middle East War when Saudi Arabia expressed the dissatisfaction of the Arab world with Western pro-Israel positioning by persuading OPEC to impose an oil embargo that caused a global panic attack. This crisis unfolded on two levels—a high road revealing Western vulnerability to Middle Eastern oil and a low road of severe consumer discontent in reaction to long gas lines and higher prices at the pump attributable to the embargo.

It was then that war hawks in the West murmured aloud about coercively ending the embargo by landing paratroopers on Saudi oil fields. Henry Kissinger, never troubled by war scenarios, speculated that such an intervention might be ‘necessary’ for the economic security of the West. The Saudi rulers heard this ‘never again’ pledge from the custodians of world order, and have since been careful not to step on Western toes.

Against such a background, it is hardly surprising that NGO concerns about the dreadful human rights landscape in Saudi Arabia falls on deaf ears. President Obama, who never tires of telling the world that the national character of America requires it to live accord with its values, centering on human rights and democracy, holds his otherwise active tongue when it comes to Saudi Arabia. He is busy reassuring the new Saudi king that the US remains as committed as ever to this second ‘special relationship’ in the Middle East, the first being, of course, with Israel.

If we look beneath the word ‘special,’ which conveys the added importance attached of the relationship, it seems to imply unconditional support, including a refusal to voice criticism in public. US geopolitical backing confers impunity, shielding a beneficiary from any pushback by the international community at the UN or elsewhere. There are other perks that come with this status additional to impunity. Perhaps none more notable than the embarrassment associated with hustling Saudi notables out of the United States the day after the 9/11 attacks. Remember that 15 of the 19 plane hijackers were Saudi nationals, and the US Government still refuses to release 28 pages of detailed evidence on alleged Saudi connections with Al Qaeda gathered by the 9/11 investigative commission.

Surely if Iran had remotely comparable linkages to those notorious events it would likely have produced a casus belli; recall that the justification for attacking Iraq in 2003 was partially based on flimsy fictitious allegations of Baghdad’s 9/11 complicity.

The Saudi special relationship (unlike that with Israel) is more mutually beneficial. Because of the enormous revenues earned by selling 10 million barrels of oil a day for decades, Saudi unwavering support for the dollar as the currency of account has been of crucial help to the American ambition to dominate the global economy. Beyond this, the Saudis after pushing the world price of oil up by as much as 400% in the 1970s quickly healed the wounds by a massive recycling of so-called petrodollars through investments in Europe and North America, and especially appreciated, have been the Saudi purchase of many billions of dollars’ worth of arms over the years. The United States did its part to uphold the relationship, especially by responding to the 1990 Iraqi attack on Kuwait that also menaced Saudi Arabia. By deploying 400,000 troops in Saudi Arabia and leading the successful effort to compel Saddam Hussein’s Iraq to withdraw from Kuwait, American reliability as Saudis protective big brother was convincingly upheld. Of course, in this interest there was a genuine convergence of interests. Western policy as shaped by American foreign policy accorded an absolute priority to keeping Gulf oil in friendly hands.

Despite the major strategic benefits to both sides, the most remarkable aspect of this special relationship is its survival in the face of the Saudi role in its massive worldwide funding of Islamic anti-Western militancy or jihadism. Saudi promotion of religious education with a Wahhabist slant is widely believed to be largely responsible for the rise and spread of jihadism, and the resultant turmoil.

I would have thought that the West, especially after 9/11 would insist that Saudi Arabia stop supporting Wahhabist style extremism abroad, even if it overlooked denials of human rights at home due to the imposition of harsh controls upon freedom of expression, of association, women’s rights, cruel and unusual punishments. More damaging in its political consequences than being the shield of Saudi impunity is the willingness of the US to go along with the anti-Iranian sectarian line that the Saudi leadership relies upon to justify such controversial moves as direct interventions in Bahrain and Yemen, as well as the provision of weapons and money to anti-Assad forces in Syria.

Saudi opportunism became evident when the kingdom threw its diplomatic support and a large bundle of cash to an anti-Sunni coup in Egypt against the elected Muslim Brotherhood government. Saudi’s true enemies are determined by the threat posed to the stability of the monarchy, and not by their sectarian identity. In this sense Iran is an enemy because it is a regional rival that threatens to impinge upon the role and influence of Saudi Arabia, and not because of its adherence to a Shia variety of Islam. Similarly the Muslim Brotherhood, despite being of Sunni persuasion, was perceived as as a threat to royal absolutism by its democratizing challenge directed at the Mubarak autocracy. Sectarian identity is distinctly secondary, especially for the Saudi monarchy that is responsible for the conduct of foreign policy. At home, the stability of royal governance is sustained by allowing a free rein to the Wahhabi religious leadership that subject the Saudi people to its severe sectarian constraints.

Saudi impunity makes us appreciate the value of normal relationships among sovereign states. These do not entail exemptions from accountability in relation to international crimes and human rights violations. These special relationships have become politically costly in this century, especially if used to protect rogue states from international scrutiny. Accountability based on the rule of law is far better for stability, security, and sustainable peace than impunity. It has become increasingly awkward for US Government to validate, in part, its global role by championing human rights while refusing to blink when it comes to the most minimum expectations of accountability for Saudi Arabia or Israel.

I would go further, and argue that such special relationships, although expressions of the primacy of geopolitics (as over against the implementation of a global rule of law), do not serve on balance to uphold national interests in the course of abandoning national values. Contrary to the precepts of political realism, in the Middle East these two special relationships unthinkingly bind the United States and its European allies to a failing foreign policy that has occasioned great suffering for many of the peoples of the region. The migration crisis that is one direct effect of these unfortunate policies, especially military intervention, is finally leading observers to connect some dots, and recognize that what is done in the Middle East has menacing reverberations for Europe. As well, it further damages the reputation of the United States as a principled leader in a global setting that is serving the global public good as well as promoting its national policy priorities. Perhaps, that reputation is tarnished beyond recovery at this point in any event, making reputational considerations almost irrelevant.

This is an updated version of an article that was published in Middle East Eye on October 6, 2015, and has been used here with permission from the author.