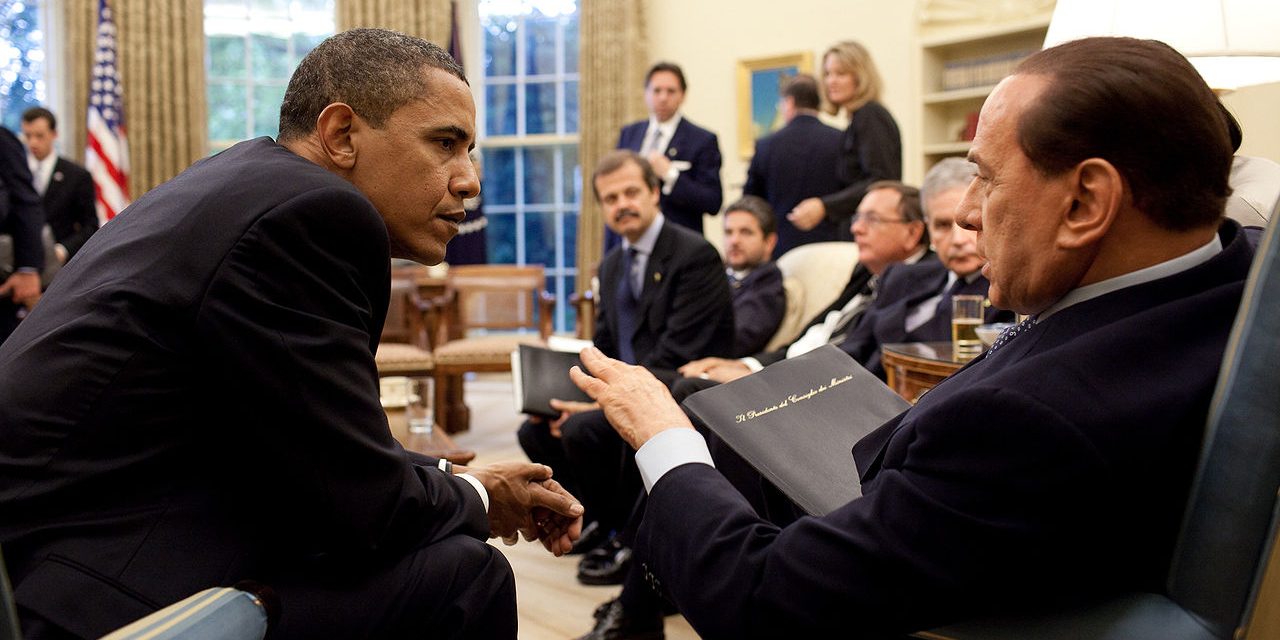 Since NATO was responsible for helping to create the refugee crisis, it behooves the organization to deal with the worsening problem.

On April 26, 2011, a meeting that can only be described as sinister took place between the then Italian Prime Minister, Silvio Berlusconi, and French President, Nicolas Sarkozy. The most pressing issue discussed at the meeting in Rome was how to deal with African immigrants.

Sarkozy, who was under pressure from his right-wing and far-right constituencies to halt immigration originating from North Africa (resulting from the Tunisian uprising), desired to strike a deal with the opportunistic Italian leader. In exchange for an Italian agreement to join a French initiative aimed at tightening border control (Italy being accused of allowing immigrants to cross through its borders to the rest of Europe), France, in turn, would resolve major disputes involving a series of takeovers involving French and Italian companies. Moreover, Italy would then secure French support for a bid by Italian economist and banker, Mario Draghi, to become the head of the European Central Bank.

Another point on the French agenda was active Italian participation in the war on Libya, initially spearheaded by France, Britain, and the United States, and later championed by NATO.

Initially, Berlusconi hesitated to take part in the war, although certainly not for any moral reasons: for example, because the war was deliberately based on a misconstrued interpretation of United Nations Security Council Resolution 1973 of March 17, 2011. The Resolution called for an ‘immediate ceasefire’, the establishment of a ‘no-fly zone’, and using all means, except foreign occupation, to ‘protect civilians’. The war, however, achieved entirely different objectives from the ones stated in the Resolution. It achieved a regime change and the bloody capture and murder of Libyan leader, Muammar al-Qaddafi and resulted in a bloodbath in which thousands of civilians were killed; civilians continue to die due to the chaos and civil war that has gripped Libya since.

Berlusconi’s change of heart had little to do with common sense and much to do with oil and gas. He was walking a tight rope. On one hand, about a quarter of Italy’s oil was imported from Libya, in addition to nearly 10 percent of the country’s natural gas. Destabilizing Libya could interrupt the flow of Libyan energy supplies at a time when Italy was desperately attempting to recover from its deep economic recession.

On the other hand, having France (which seemed to be in the mood for intervention because, following the Libya war, France marched on to Mali) hold all the cards in Libya could be devastating for Italy. “The Franco-Italian spat over immigration follows sharp differences over Libya, where Rome has been dragged into a war it would rather avoid, fearing a Paris-Benghazi nexus will freeze out its substantial interests in Libyan oil and gas,” the Financial Times reported at the time.

The successful meeting between the two leaders paved the way for Italian intervention, which took part in earnest in the war on Libya on April 28. Meanwhile, France kept its part of the bargain, and on November 1 of that same year, Mario Draghi succeeded Jean-Claude Trichet as the President of the European Central Bank.

Both countries benefited, albeit Libya was destroyed.

It is difficult to imagine that Berlusconi, a repulsive and corrupt politician even by the low standards of Italian politics, operated on the basis of any moral standards, aside from personal gains and self-interest. Indeed, neither his ‘friendship’ with Libyan long-time ruler, Qaddafi, nor the many perks and massive profits he received from Libya were enough to honor his commitment not to participate in a war that was clearly not aimed at saving lives, but maintaining access to Libya’s energy supplies.

Equally interesting is the fact that UNSC Resolution 1973 was promoted by its supporters as one aimed at protecting civilians from an imminent massacre about to be carried by the Libyan Army in Benghazi. Regardless of what Qaddafi’s intentions were, the NATO war resulted in untold suffering among Libyan civilians on three different fronts.

First, thousands of Libyans were killed and wounded as a direct result of NATO’s intervention.

Second, the war turned Libya into warring fiefdoms, armed and supported by regional and international powers. The hundreds of militias that exist in Libya today have deprived Libyans of any sense of security, and exposed the civilian population to a war reality that, seemingly, has no end in sight.

Third, thousands of Libyans, or Africans who once called Libya home, found themselves fleeing the war using every means of transport possible. Tens of thousands of them sought refuge in Europe, while thousands died trying.

Few in the Italian Government would care to remember their country’s role in the war on Libya which, despite early hesitation, was embraced with utmost enthusiasm. The refugees who are lucky enough to make it to Italy’s shores are constantly demonized by Italian media and perceived as a burden on the still-struggling Italian economy. What they forget is that, thanks to Libya’s reasonably-priced and cheaply transported oil and gas, the Italian economy was kept afloat for years. The poor refugees are not as much of a burden on Italy’s economy as Italy was a burden on Libya; in fact, on the whole of Africa.

Libya was colonized from 1911 to 1943 by Italy, which was driven out along with its German Nazi partners by local resistance and eventually by the Allies in World War II. It was not until 1998 that Italy apologized for the sins of colonizing the country, which came at a terribly high price of death and destruction. Yet, eleven years later, the supposedly remorseful Italy was bombing Libya once more to ensure the flow of cheap oil and to keep African immigrants and refugees at bay.

Neither was the bloody 2011 war an exception. Four years after that war, Italy once more began calling for another war on Libya for, clearly, the desired objectives of the first war have not been met: immigrants and refugees, despite high risks and a mounting death toll, continued to pour into Italy and the flow of oil and gas has been disrupted by a civil war among Libya’s NATO allies. But there is another factor, according to Marianne Arens: “The sabre-rattling over Libya also serves to divert attention from the growing domestic social and political tensions” in Italy itself.

The relationship between war and the rising challenge of refugees, immigrants and asylum seekers cannot be overstated. It is both ironic and sad that the many thousands of war refugees are seeking shelter in the same European and NATO countries that either directly (as in Libya, Iraq, Afghanistan) or indirectly (as in Syria) contributed to the destruction and destabilization of their countries.

Even Greece, which is displaying little patience or regard for humanitarian laws in its treatment of the many thousands of refugees coming from Syria, Iraq and Afghanistan, via Turkey, took part, although in a minor role,  in the war in Libya (2011) and provided assistance to the US-led war on Iraq (2003).

While one strongly sympathizes with Greece as it stands on the verge of bankruptcy and having just reached a deal with the EU that could keep the impoverished country solvent for the coming months, one cannot fathom the mistreatment of innocent Syrians and Iraqis as they brave the sea to escape the hellish wars back home. The Greeks, who suffered terrible wars in the past, should know this more than anyone else. The scenes from the islands of Lesbos and Kos are heartbreaking, to say the least.

However, the countries that should be confronted most about their moral responsibility towards war refugees are those who ignited these wars in the first place. While Libya continues to descend into chaos, and Syria and Iraq subsist in a state of bedlam, both France and Britain discuss the problem of refugees attempting to cross into both countries as if the refugees are swarms of locusts, not innocent people who were victimized mostly by US-European wars. Meanwhile, the US, geographically removed from the refugee crisis, seems unconcerned by the chaotic scenes of desperate refugees, capsizing boats, and pleading families.

Those who wage war should, at least, shoulder part of the moral responsibility of addressing the horrible consequences that armed conflict inflicts upon innocent people. The Italian example shows how economic interests trump morality, and not a single NATO country, Turkey included, is innocent.

Now that the refugee crisis is worsening, it behooves NATO to deal with the problem, at least with a degree of humanity and— dare one say—with the same enthusiasm that led it to several devastating wars in recent years.