It is clear that in Pakistan the control is with the military. The Pakistani military would likely take its cue from India.

India’s actions on the Line of Control last year and its operations in pursuit of Naga militants who had ambushed its convoy inflicting heavy casualties on its troops this May together are being taken as indicators of India’s new strategic doctrine. Public statements by its leaders, in particular the defense minister’s on the use of proxy groups to fight terrorists, are another indicator. 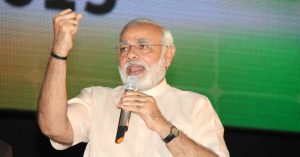 Taken together the actions and the rhetoric can indicate India’s new strategic doctrine.  Since India has not explicitly owned up to this yet, it has been variously termed as ‘disproportionate response’ in the media and as ‘defensive offence’ by its National Security Adviser (NSA), Ajit Doval.

Doval used the term in a lecture immediately prior to the elections early last year that has belatedly has become famous for his statement: ‘You can do one Mumbai, you will lose Baluchistan.’ The lecture itself is important in reading as India’s current strategic doctrine.

This is a step forward from earlier regimes that were coy of setting out where they stood on defense and security. The resulting situation was such that analysts could be best visualized as ‘blind men of Hindoostan’ clustered around an elephant and using whatever came within their grasp as the strategic doctrine of the state.

Since India has not published a white paper or strategic review paper, the situation is not materially different but the advance this time round is that the government owns up to being tough for both political and strategic reasons.

The political reasons for this are easy to see. Prime Minister Modi in an election speech had referred to his 56-inch chest. A tough image is therefore one that he has self-selected to. The ruling party subscribes to cultural nationalism. This ideology has it that India has neglected her defenses, leading to its subjugation not only by colonialists but also by Muslims in the medieval ages. India has grown back its muscles which can now be unapologetically displayed to keep Pakistan on the backfoot.

Political utility apart, there are also strategic reasons for owning up to a more proactive and offensive strategic doctrine. It serves a deterrent purpose. The government having prioritized is unwilling to see it thwarted by a mega terror attack originating in Pakistan. It therefore prefers to serve notice to Pakistan on the consequences.

It also has foreign policy benefit in that it enables it to then engage Pakistan from a position of strength. The preceding months of exchanges of firing on the Line of Control serve to condition Pakistan that it is no longer business-as-usual.

Alongside, if a recent Pakistani corps commanders’ conference outcome is to be believed, Indian intelligence has been fostering trouble in both provinces bordering Afghanistan. A media report in the UK has revealed that the MQM party in Karachi, currently commanding the attention of a disciplining sweep in Karachi, has reportedly received funding from Indian sources.

In so far as these lines of strategy are to sensitize Pakistan to its soft underbelly with the purpose of deterrence, they appear justifiable. Having pegged Pakistan down to an extent, India can then afford a measured reaching out.

Its new foreign secretary has put in place the possibilities for this with his early visit to Pakistan on being handpicked for the assignment. The policy appears to be on course, with Mr. Modi contemplating going to Pakistan on the invite of Mr. Sharif for the next SAARC meet. More can be expected on this in case the two meet on the sidelines of the United Nations summit in September.

The problem is in between the cup and the lip. The recent terror attack in a border town in Indian Punjab which left ten dead is indicative. The attack is taken as having Pakistani imprimatur by many in India.

If so, then its choice of target in a relatively remote location suggests strategic messaging: that Pakistan has assets it could use more dangerously in case India were to twist the knife Pakistan alleges India holds at its underbelly. From this point of view, the two intelligence establishments that have no illusions of each other can now desist from a worse joust.

This would however take political control. It is clear that in Pakistan the control is with the military. The Pakistani military would likely take its cue from India.

India is aware that as an interlocutor, Mr. Sharif, continues to have the same limitations he had when the previous National Democratic Alliance government in Delhi had attempted a reaching out through the Lahore process in 1999. Therefore, India has acceded to a meeting between the National Security Advisers and the two military operations’ heads.

A frank exchange between the two sides at this meeting—the schedule of which is not been reached yet—can prove useful in determining political will on both sides to exercise control over their respective proxies. It can then open up possibilities at the following meeting between the principals.

The two sides bear reminding of the Indian NSA’s speech referred to earlier. He seemed to think that Pakistan could be deterred, saying, ‘Once they know that India has shifted its gear from a defensive mode to defensive offence they will find that it is unaffordable for them.’ He went on to say that since the two sides know each others ‘tricks’, they would be able to settle.

The danger is in what he went on to say. To him, since this intelligence agency-led tussle would not involve military engagement; there would be no nuclear threshold to reckon with. Since the speech was prior to his being briefed on the nuclear equations in his new capacity as head of India’s Executive Council of the Nuclear Command Authority, he is now presumably has a better nuclear picture.

Hopefully, he finds his statement as a naïve underestimation of nuclear dangers. Only in such a case will he use the opportunity of the meeting with his Pakistani counterpart usefully, as an opportunity for both to get off the escalator or slide.

Else, whichever the metaphor chosen, the net result could well be the same.