In my column for the 800th anniversary of Magna Carta, I wrote: “A number of legal scholars have made the irrelevant point that the Magna Carta protected rights of the Church, nobles, and free men who were not enserfed, a small percentage of the population in the early 13th century.  We hear the same about the US Constitution—it was something the rich did for themselves.  I have no sympathy for debunking human achievements that, in the end, gave ordinary people liberty.”

My celebration of this document was reposted today on a number of websites including as far away as Hong Kong.  But the New York Times and a dolt of a law professor at the University of Chicago named Tom Ginsburg chose to debunk the Magna Carta on its 800th anniversary. “Stop Revering Magna Carta,” Ginsburg tells us.

Ginsburg alleges that the Magna Carta “wasn’t effective. In fact, it was a failure.”  The law professor maintains that Magna Carta’s fame rests on myths, not on reality.

What absolute nonsense. In this age of American Caesars, we need to celebrate the Magna Carta, not debunk it.

The Magna Carta is the most important document in Anglo-American history. The Magna Carta launched a long struggle culminating in the Glorious Revolution in the 17th century. The struggle established that law flows from the people to whom it is accountable and not from an unaccountable monarch ruling by Divine Right. The Magna Carta gave Americans the Constitution and Bill of Rights.  These are massive human achievements. The rule of law is a shield of the people. Rule by decrees is a weapon in the hand of tyranny. 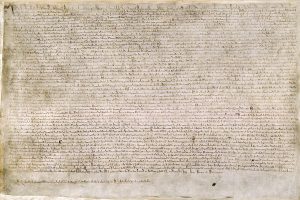 The Magna Carta (originally known as the Charter of Liberties) of 1215, written in iron gall ink on parchment in medieval Latin, using standard abbreviations of the period, authenticated with the Great Seal of King John. (British Library/Public Domain)

Ginsburg debunks Magna Carta as the product “of an intra-elite struggle, in which the nobles were chiefly concerned with their own privileges.”  At one time it was expected that a professor of law understood that law unfolds to the limit of its logic.  For example, the asset freeze provision in the 1970 Racketeer Influenced and Corrupt Organizations Act (RICO) was directed at organized crime.  However, the law quickly spread beyond this intent and even jumped over the boundaries of the criminal code into civil divorce suits.

The 13th century English barons might not have been concerned with the rights of serfs, but their insistence that the king was accountable to law grew, like the mighty oak from an acorn, into a political system in which government is accountable to law that flows from elected representatives of the people.

If you wish to understand how the rule of law was accomplished and how it is being lost, read The Tyranny of Good Intentions.