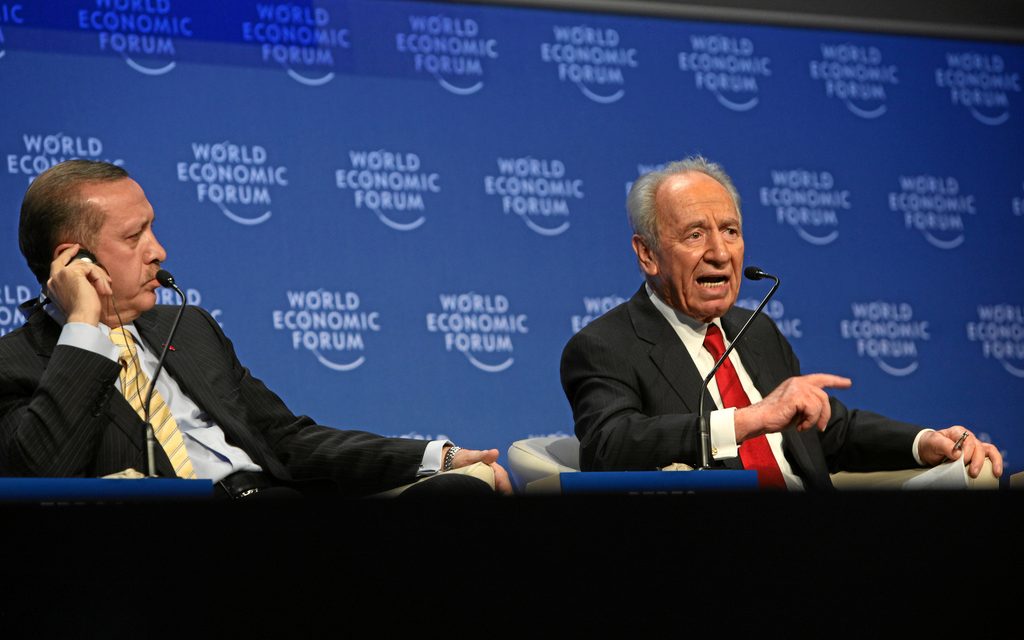 The enmity between Erdoğan and Peres dates to Israel's murder of civilians during Operation Cast Lead and subsequent attack on the Mavi Marmara.

Newspapers reported on June 9th that former Israeli president Shimon Peres (2007-2014) was pleased by the outcome in Turkey. He is quoted as saying, “I am happy about what happened in Turkey—Erdoğan wanted to turn Turkey into Iran, and there is no room for two Irans in the Middle East.”

It is worth recalling that the downward spiral in relations between Turkey and Israel started in a real way when Erdoğan attacked Israel and Peres personally for defending Israel’s massive attack on Gaza at the 2009 World Economic Forum in the course of a panel in which both he and Peres were members. Erdoğan responded to Peres’ contention that Hamas was responsible for violence against Israeli civilians. His words were undiplomatically blunt: “Mr. Peres, you are a senior citizen and you speak in a loud tone. I feel that your raised voice is due to the guilt you feel. But be sure that my voice will not be raised as yours is. When it comes to killing, you know very well how to kill. I know very well how you struck and killed innocent children on the beaches.” So piercing the haze that separates these polite evasions of such international events from the cruel realities under discussion was a welcome rarity: on this occasion Erdoğan was confronting the naked face of power with a truth that needed to be heard. After interference from the chair, Erdoğan strode off the stage announcing that he was through forever with the World Economic Forum, not for allowing Peres to speak, but for the attempting to stifle a response.

The deterioration in Turkish/Israeli relations climaxed the following year when Israeli commandos boarded the Turkish passenger ship, Mavi Marmara, the lead vessel among six in a freedom flotilla containing peace activists bringing humanitarian supplies to Gaza and seeking to break the Israeli blockade. The incident on May 31, 2010 resulted in the death of nine Turkish nationals, and created an enduring rupture in the political relations between the two countries that continues despite efforts by the American president, Barack Obama, to encourage normalization. Turkey is prepared to compromise on the issues raised by the Mavi Marmara attack, but to its credit will not accept normalization until Israel lifts its blockade of Gaza and ceases its use of massive force against the totally vulnerable Gazan civilian population.

Erdoğan’s departure from diplomatic protocol at the World Economic Forum illustrated his impulsive tendency to vent his feeling in public places without the usual filters of self-censorship that is second nature for most politicians. Of course, assessing such outbursts generally depends on the context and on whether what is being said so forthrightly has merit or not. Erdoğan’s public venting in relation to policies that were sensitive for secular Turks became particularly frequent, intensifying polarization, especially after the AKP’s one-sided victory in the 2011 general election after which the Turkish leader did seem to embrace a more majoritarian view of democracy (acting on the mandate of the majority of voters), and abandoning the pragmatism of his earlier posture based on an acceptance of republican democracy (that is, respect for minority values and views, checks and balances on the exercise of state power).

Reverting to the recent Peres assertion, it is certainly inflammatory and deeply misleading to link Turkey under the AKP with Iran, and to contend that Erdoğan’s hidden project is to convert Turkey into a second Iran. This is both false and insulting, as if Turkey is incapable of self-determination according to the declared will of its own public and elected leaders. There exists no credible evidence that Turkey has in any way endorsed the defining feature of the Islamic Republic of Iran, namely, a theocratic mode of governance.

Peres also essentializes Iran, refusing to acknowledge its recent evolution as a result of Hassan Rouhani’s election as president in 2013 and Iran’s forthcoming nuclear diplomacy that went the extra mile in search of a formula that would normalize its regional and global relations, which if accepted by the West and put into practiced, will almost certainly be viewed as a major contribution to regional and world peace. Peres speaks as if Iran is the hermetically sealed embodiment of political evil rather than a country that has struggled to overcome its autocratic past under the Shah, and managed to be stable during this period of exceptional regional turmoil with its theocracy displaying a willingness to indulge a limited democracy despite threats and provocations from the United States and Israel. There is much to criticize in Iran, but for such criticism to be responsible, it should be responsive to actualities, especially in the Middle East where there are such scant grounds for stability, let alone justice.

In important respects, the outcome of the Turkish elections is far better interpreted as a Kurdish HDP victory rather than an Erdoğan AKP defeat. Time will tell whether the Kurds will be constructive and creative in this phase of their political engagement within Turkey and in relation to Kurdish political developments in neighboring countries. It will also determine whether Erdoğan is statesmanlike and creative in shaping the political future of the country, taking to heart the electoral message that any shift to a presidential system is not now in the interests of the country.