Chechnya’s Terrorist Network provides a good introduction to the topic and has a well written conclusion.

As a textbook, Chechnya’s Terrorist Network fills the genre very well. It provides a good introduction to the topic, takes the reader through the political events (including the terrorist acts that are treated as such) of the post-Soviet decades, and has a well written conclusion.

The conclusion is within itself a strong essay that could readily stand alone to introduce the whole concept of terrorism. It begins with a strong thesis summary: “North Caucasus terrorism presents an illustrative case demonstrating how terrorist movements evolve in response to counterterrorist measures and how they adapt to changing environments.”

The conclusion ends with comments on “Lessons from Russia,” as “Russia’s experiences with the terrorist threat offer some valuable lessons to the global counterterrorism community. First, Russia’s overreliance on the hard-line approach and “on military means has left other counterterrorist spheres underdeveloped.” Russia’s approach “Illustrates the necessity of not only combatting the terrorist threat militarily but also appealing to the hearts and minds of the population.”

Finally, when almost any anti-government action these days can be labelled “terror”, Pokalova writes about “the dangers of treating such diverse challenges to the state as separatism and terrorism under a single umbrella of a war on terror.” This all sounds very familiar to people following the U.S. terror wars in the Middle East and elsewhere. 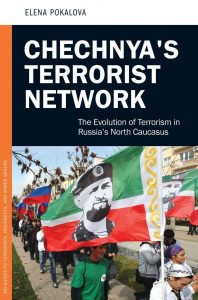 Between the introduction and the conclusion is a definitive textbook thesis style of writing. It focuses strictly on the given topic, provides dates, names, actions, and provides some analysis of the underlying causes (independence, economics, with the big rally coming behind religion). It carries little in the way of anecdotal commentary either from the author’s firsthand experience in the region (as compared with such writers as Robert Fisk, Pepe Escobar, Franklin Lamb, Chris Hedges) or from participants in the wars. Written as a textbook, it is also priced as a textbook ($64 on Amazon, $51 for Kindle!) so unless this is a course requirement, it is a rather pricy summary for events whose lessons are generally well-known from other terror wars.

And like many textbooks, it is written for a certain audience. This particular audience is not one that wants to consider any outside involvement in the terror wars other than the now eternal bogeyman, al-Qaeda’s Osama bin Laden. Admittedly, the text does not dwell on this involvement too much, for if it did it would then have to reach into territory that might prove uncomfortable both geopolitically and in the sales department.

That territory is the territory of the CIA and other covert military operations that has fostered and spread freedom fighters/insurgents/terrorists in many regions of the world including the Caucasus:

“Putin stated that the terror in Chechnya and in the Russian Caucasus in the early 1990’s was actively backed by the CIA and western Intelligence services to deliberately weaken Russia. He noted that the Russian FSB foreign intelligence had documentation of the US covert role without giving details. What Putin, an intelligence professional of the highest order, only hinted at in his remarks, I have documented in detail from non-Russian sources. The report has enormous implications to reveal to the world the long-standing hidden agenda of influential circles in Washington to destroy Russia as a functioning sovereign state, an agenda which includes the neo-nazi coup d’etat in Ukraine and severe financial sanction warfare against Moscow. The following is drawn on my book, Amerikas’ Heilige Krieg.”

This, quoted from a critical essay by William Engdahl, clearly indicates that there are other lessons to be learned from the Chechyn wars as well.

In conclusion, this text works well for the information provided and as a starting point for the overall topic of terrorism. It is not fully definitive, but in good textbook style provides much background data to inform any broader inquiry.