No economist should ever have accepted the claim that the economy was in recovery while participation in the labor force was declining.

The May 8 payroll jobs report is more of the same.  The Bureau of Labor Statistics claims that 223,000 new jobs were created in April.  Let’s accept the claim and see where the jobs are.

Specialty trade contractors are credited with 41,000 jobs equally split between residential and nonresidential.  I believe these are home and building repairs and remodeling.

Despite store closings and weak retail sales, 12,000 people were hired in retail trade.

Despite negative first quarter GDP growth, 62,000 people were hired in professional and business services, 67% of which are in administrative and waste services. 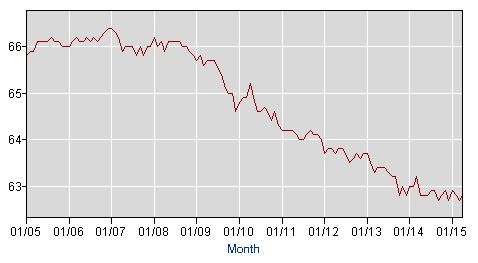 There are no jobs in manufacturing.

As I have pointed out for a number of years, according to the payroll jobs reports, the complexion of the US labor force is that of a Third World country. Most of the jobs created are lowly paid domestic services.

The well paying high productivity, high value-added jobs have been offshored and given to foreigners who work for less.  This fact, more than the reduction in marginal income tax rates, is the reason for the rising inequality in the distribution of income and wealth.

Offshoring middle class jobs raises corporate profits and, thereby, the incomes of corporate owners (shareholders) and executives.  But it reduces the incomes of the majority of the population who are forced into either lowly paid and part time jobs or unemployment.

Having looked at the actual details of the payroll jobs report, which are seldom if ever reported in the financial media, let’s look at what else goes unreported in the media.

The government’s economic statistical agencies are under pressure not to roil the financial markets.  Consequently, initial reports, which are always the headline reports, are as close as possible to the “consensus forecast” prepared by economists in the financial sector, whose jobs are to maintain a good atmosphere for financial instruments.

This practice results in optimistic advanced estimates and first estimates.  The real reporting comes later in revisions.  For example, today the headline was 223,000 new jobs, recovery on track, stock market up.  What was not reported by the media is that the prior month’s (March) payroll jobs growth was cut to 85,000 jobs, substantially below population growth.

The same thing happens with the reporting of GDP growth. The first quarter GDP advanced estimate was kept in positive territory with a 0.2%—two-tenths of one percent—growth.  When the revisions arrive, which we already know will be negative GDP growth due to the trade figure, they will not receive the same attention.

There are many additional problems with the economic reporting.  I have written about a number of them in past reports.  Here I will provide one more example.  According to the payroll jobs report oil and gas extraction lost 3,300 jobs in April.  This low number is inconsistent with what we know about layoffs from fracking operations. According to Challenger Gray, a private firm that tracks job cuts announced by corporations, in April 20,675 jobs were lost as a result of falling oil prices. That is more than six times the loss reported by the payroll jobs report.

Challenger Gray reports that during the first four months of this year, corporations have announced 201,796 job cuts. Obviously, corporations are not creating new jobs.  That is why the BLS looks to waitresses, bartenders, remodeling contractors, government, and social services for employment growth.

Jobs offshoring has shriveled the employment opportunities for Americans. These shriveled opportunities are largely responsible for stagnation and decline in real median family incomes, for the falling labor force participation rate, for the rising inequality in the income and wealth distribution, and for student loans that cannot be repaid from the lowly paid jobs available.  Corporations and Wall Street in pursuit of short-term profits have given the economy away.  Much of the former US economy now belongs to China and India.  Corporate executives and shareholders got rich off of this give-away.