Legislation introduced this past week in the U.S. Congress could facilitate cooperation between Syria and America.

Syria’s Director-General of Antiquates and Museums, Dr. Maamoun Abdul-Karim—as well as other officials, including the Ministers of Culture, Information, and Tourism—often speak of their beloved country being “an open-air museum.” Few would challenge their characterization as the global community focuses increasingly on how to stop crimes against culture which are now widely viewed as crimes against the common heritage of humanity. 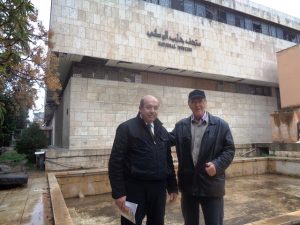 The National Museum Director briefing the author on measures he is taking to protect antiquities in Aleppo, Syria. (Photo courtesy of Franklin Lamb)

Identifying and stopping the current spread of looting and shadowy illegal antiquities marketplaces requires their exposure to sunshine. One is reminded of some wise counsel from U.S. Supreme Court Justice Louis Brandeis back in 1913: “Sunlight is said to be the best of disinfectants. If the broad light of day could be let in upon men’s actions, it would purify them as the sun disinfects.”

Toward this end, the UN Security Council and, particularly, Turkey, need to cooperate much more with Syria to halt the trade in looted antiquities that helps fund jihadist groups. To its credit, on February 12, the Security Council passed a resolution identifying groups such as ISIS and Al Nusra Front of generating income by selling antiquities looted in the conflict, and the UNSC is well aware that Turkey has been facilitating smuggling of cultural heritage treasures across its 560-mile border. Turkey has become the main route for looted Syrian antiquities, followed by Iraq, Lebanon and Jordan. A BBC Radio 4 report of February 17 quoted a ‘middle man’ who sells looted Syrian artifacts to international dealers: “From Turkey the final destination is Western Europe, he says. “Turkish merchants sell it to dealers in Europe. They call them, send pictures… people from Europe come to check the goods and take them away.”

Frankly put, if there is not greater international cooperation with the Syrian government to stamp out the current scourge then our global heritage, cannot be preserved. As Syrian Minister of Culture, Issam Khalil explained during a recent meeting in his office in central Damascus, “We have the conclusive documents and evidence to prove our ownership of these antiquities and we also have the will and readiness to cooperate with any serious effort to prevent smuggling of Syrian antiquities abroad.”

One of the strongest laws in effect and which is being enforced wherever security permits is Syria’s 1963 Antiquities Law, as amended in 1999. The regulatory law is divided into six chapters, corresponding to general provisions, immovable antiquities, movable antiquities, excavations, penalties and miscellaneous provisions.

Syria’s law is driven by the idea that cultural goods represent a public interest, and is characterized by a strict retentive spirit and a punitive set of sanctions because the government and people of Syria believe that antiquities belong to the state and should be exhibited in museums not exported to the highest international bidder. The law provides that the owner of an antiquity or piece of land where the archaeological site is situated receives payment of a “suitable financial reward” in the case of movable antiquities (Article 35) and compensation irrespective “of the archaeological, artistic or historical value of expropriated buildings and areas” (Article 20). In all circumstances the state has the exclusive power to oversee the conservation, pertinent modifications or archaeological excavations of the sites.

Among its provisions are the following:

Moreover, any relocation of antiquities within Syria’s borders requires the permission of the pertinent authorities (Article 40).

There are two provisions in the prescriptive part directly relevant to the current armed conflict. Article 7 prohibits, inter alia, destroying, transforming and damaging both movable and immovable antiquities by writing on them, engraving on them, or changing their features. Article 26 bans building military facilities within 500 meters of registered immovable archaeological and historical properties.

The law does not contemplate the suspension of its obligations in exceptional circumstances and continues to apply today during the current conflict.

But as DGAMS’ Dr. Abdul-Karim has noted, it is difficult to ensure “the protection of the immovable heritage in the country, especially for those archaeological and world heritage sites that are located in conflict areas and cannot be accessed.”

Engulfed in civil war, without an end in sight, Syria has employed its 1963 law with amendments and its governmental institutions and local community support and this country for the benefit of all of us who value our past. Syria is taking the lead to make a big difference but her people need help from those who share their values about our past and who are able to help. Intensified law enforcement efforts directed at investigating and prosecuting cultural heritage trafficking must be supported by the government and people of every country.

International criminal law in many ways is still in its infancy. Yet, hoping to accelerate prospects of achieving international criminal accountability has been a driving force behind the adoption of laws for the protection of cultural heritage. No fewer than 37 countries are currently considering strengthening their laws to stop importation and illicit commerce in looted Syrian cultural heritage artifacts, doubtless a reaction to the iconoclastic nihilist’s crimes in this region.

This growing international commitment to beef up criminal responsibility laws is good. But it is not good enough.

Legislation introduced this past week in the U.S. Congress could facilitate cooperation between Syria and America, and joint efforts to preserve and protect our shared cultural heritage may well spread into the political arena according to sponsors of the Protect and Preserve International Cultural Property Act (H.R. 5703). “The fight to preserve our common cultural heritage, as well as to deny extremists such as ISIL [Islamic State in Iraq and Syria] resources from the sale of blood antiquities, is yet another front on the global war against terror,” proclaimed co-sponsor Congressman Chris Smith (R-N.J).

(1) Protect and preserve international cultural property at risk of destruction in Syria due to political instability, armed conflict, or natural or other disasters;

(2) Protect Syrian and international cultural property pursuant to its obligations under the 1954 Hague Convention for the Protection of Cultural Property in the Event of Armed Conflict and customary international law in all conflicts to which the United States is a party;

(3) Prevent, in accordance with existing laws, importation of Syria’s cultural property pillaged, looted, or stolen during political instability, armed conflict, or natural or other disasters; and

(4) Ensure that existing laws and regulations, including import restrictions are fully implemented to prevent the trafficking in stolen or looted Syria cultural property.

The legislation also attempts to offer a solution to the current cumbersome US statutory framework, which requires Syria’s government to first ask the State Department for American import controls restricting cultural objects. The barrier to date has been that the US government recognized the rebels as the legitimate governing authority of the Syrian Arab Republic in 2012, so cooperation has not yet happened.

US Secretary of State John Kerry has pledged to launch an international campaign that protects Syria’s and the world’s cultural property while putting politics aside. In doing so, Kerry labeled the destruction of heritage in Syria “a purposeful final insult” which is “stealing the soul of millions.” He referred to the devastation in the Ancient City of Aleppo and to the extensive looting of Apamea and Dura Europos as a tragedy for the Syrian people and the rest of the world, and remarked: “How shocking and historically shameful it would be if we did nothing while the forces of chaos rob the very cradle of our civilization.”

Steny Hoyer, from Maryland’s 5th District, commented the other day. “If the US can work with the Iranians over the nuclear file, surely we can work with Syria to preserve the cultural heritage that belongs to all people regardless of politics. Our mutual heritage is bigger than today’s political differences and we must work together. And I think the White House is ready and this may happen soon.”