The treatment of Iran’s nuclear program is less indicative of a commitment to nonproliferation than a shortsighted expression of geopolitical priorities.

Perhaps, Netanyahu deserves some words of appreciation, at least from the Israeli hard right, for the temporary erasure of the Palestinian ordeal from national, regional, and global policy agendas. Many are distracted by the Republican recriminations directed at Obama’s diplomatic initiative to close a deal that exchanges a loosening of sanctions imposed on Iran for an agreement by Tehran to accept intrusive inspections of their nuclear program and strict limits on the amount of enriched uranium of weapons grade that can be produced or retained. 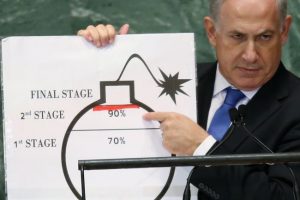 Benjamin Netanyahu at the UN General Assembly in September 2012.

We can only wonder about the stability and future prospects of the United States if 47 Republican senators can irresponsibly further jeopardize the peace of the Middle East and the world by writing an outrageous Open Letter to the leadership of Iran. In this reckless political maneuver the government of Iran is provocatively reminded that whatever agreement may be reached by the two governments will in all likelihood be disowned if a Republican is elected president in 2016, or short of that, by nullifying actions taken by a Republican-controlled Congress. Mr. Netanyahu must be smiling whenever he looks at a mirror, astonished by his own ability to get the better of reason and self-interest in America, by his pyrotechnic display of ill-informed belligerence in his March 2nd address to Congress. Surely, political theater of sorts, but unlike a performance artist, Netanyahu is a political player whose past antics have brought death and destruction and now mindlessly and bombastically risk far worse in the future.

What interests and disturbs me even more than the fallout from Netanyahu’s partisan speech, are several unexamined presuppositions that falsely and misleadingly frame the wider debate on Iran policy. Even the most respected news sites in the West, including such influential outlets as the New York Times or The Economist, frame the discourse by taking three propositions for granted in ways that severely bias our understanding:

Sanctions are a form of coercion expressly imposed in this case to exert pressure on Iran to negotiate an agreement that would provide reassurance that it was not seeking to acquire nuclear weaponry. Supposedly, Iran’s behavior made such a reinforcement of the nonproliferation treaty regime a reasonable precaution. Such measures had never been adopted or even proposed in relation to either Germany and Japan, the two main defeated countries in World War II, who have long possessed the technical and material means to acquire nuclear weapons in a matter of months. Iran has repeatedly given assurances that its nuclear program is peacefully aimed at producing energy and for medical applications, not weapons, and has accepted a willingness to have its nuclear program more regulated than is the case for any other country in the world.

It should be appreciated that Iran has not been guilty of waging an aggressive war for over 275 year. Not only has it refrained in recent years from launching attacks across its borders, although it has itself been severely victimized by major interventions and aggressions. Most spectacularly, the CIA-facilitated coup in 1953 that restored the Shah to power and overthrew a democratically elected government imposed a dictatorial regime on the country for over 25 years. And in 1980 Iraq invaded Iran with strong encouragement of the United States. Additionally, Iran has been subject over the years to a variety of Western covert operations designed to destabilize its government and disrupt its nuclear program.

Despite their UN backing, the case for sanctions seems to be an unfortunate instance of double standards, accentuated by the averted gaze of the international community over the years with respect to Israel’s process of acquisition, possession, and development of nuclear weaponry. This is especially irresponsible, given Israel’s behavior that has repeatedly exhibited a defiant attitude toward international law and world public opinion. I would conclude that Iran the imposition of harsh sanctions on Iran is discriminatory, more likely to intensify that resolve conflict. The proper use of international sanctions is to avert war or implement international law, and not as here to serve as a geopolitical instrument of hard power that seeks to sustain a hierarchical nuclear status quo in the region and beyond.

Iran is expected not only to forego the option to acquire nuclear weapons, but to agree to a framework of intrusive inspection if it wants to be treated as a ‘normal’ state after it proves itself worthy. As indicated, this approach seems discriminatory and hypocritical in the extreme. It would be more to the point to acknowledge the relative reasonableness of Iran’s quest for a deterrent capability given the extent to which its security and sovereignty have threatened and encroached upon by the United States and Israel.

It is relevant to note that the Obama presidency, although opting for a diplomatic resolution of the dispute about its nuclear program, nevertheless repeatedly refuses to remove the military option from the negotiating table. Israel does little to hide its efforts to build support for a coercive approach that threatens a preemptive military strike. Such an unlawful imprudent approach is justified by Israel’s belief that Iran poses an emerging existential threat to its survival if it should acquire weapons of mass destruction. Israel bases this assessment on past statements by Iranian leaders that Israel should not or will not exist, but such inflammatory rhetoric has never been tied to any statement of intention to wage war against Israel. To assert an existential threat as a pretext for war is irresponsible and dangerous.

From Iran’s perspective acquiring a nuclear weapons capability would seem a reasonable response to its security situation. If deterrence is deemed a security necessity for the United States and Israel, given their military dominance in conventional weaponry, it should be even more so for Iran that is truly faced with a genuine, credible, and dangerous existential threat. Few countries would become safer and more secure if in possession of nuclear weapons but Iran is one state that likely would be. Again what is at stake most fundamentally is the challenge to the nuclear oligopoly that has been maintained since the early stages of the Cold War when the Soviet Union broke the American nuclear monopoly. More immediately threatened if Iran were to acquire nuclear weapons at some future point is Israel’s regional nuclear weapons monopoly that serves both as a deterrent to others and helps clear political space for Israel’s expansionist moves in the region. I would not argue that Iran should acquire nuclear weapons, but rather that it has the strongest case among sovereign states to do so, and it is a surreal twist of realities to act as if Iran is the outlier or rogue state rather than the nuclear weapons states that refuse to honor their obligation set forth in Article VI of the NPT to seek nuclear disarmament in good faith at a time. The most urgent threat to the future in this period arises from the increasing risk that nuclear weapons will be used at some point to resolve an international conflict, and thus it should be a global policy imperative to demand efforts to achieve nuclear disarmament rather than use geopolitical leverage to sustain the existing hierarchy of states with respect to nuclear weaponry.

Israel’s military threats directed at Iran clearly violate the international law prohibition contained in Article 2(4) of the UN Charter that prohibit “threats or uses” of force except for self-defense against a prior armed attack or with an authorization by the Security Council. Despite this threat to international peace in an already turbulent Middle East, there is a widespread international acceptance of Israel’s behavior, and in fact, the most persuasive argument in favor of the sanctions regime is that it allays the concerns of the Israeli government and thus reduces the prospect of a unilateral military strike on Iran.

Overall, this opportunistic treatment of Iran’s nuclear program is less indicative of a commitment to nonproliferation than it is a shortsighted expression of geopolitical priorities. If peace and stability were the true motivations of the international community, then we would at least expect to hear strident calls for a nuclear free Middle East tied to a regional security framework. Until such a call is made, there is a cynical game being played with the complicity of the mainstream media. To expose this game we need to realize how greatly the three presuppositions discussed above misshape perceptions and discourse.