Securing the Gulf: The Question of Yemen 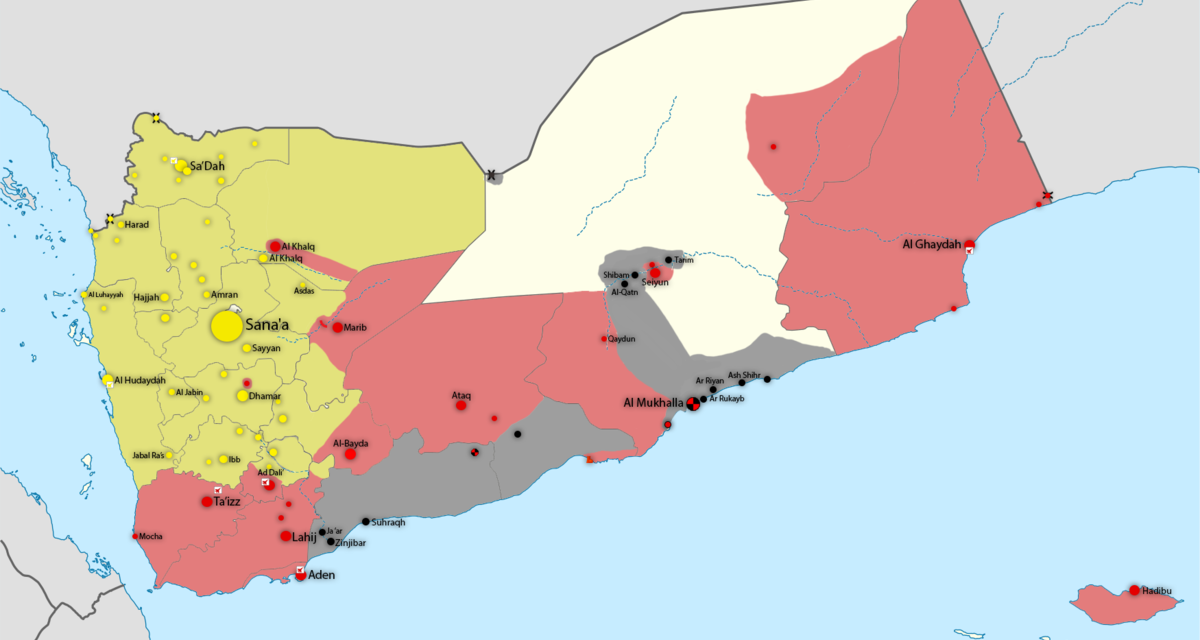 Map showing division of territory in Yemen: green is controlled by Houthis, red by Hadi loyalists, and gray by al-Qaeda and Ansar al-Sharia (0ali1/Wikimedia Commons)

Yemen has seen its share of issues in the past, but the recent illegitimate coup mastered by the Houthi rebels has torn the country in two parts.

For quite some time now, countries at the center of the world—Iraq, Syria, Egypt, Libya, and even Lebanon, for that matter—have had their share of troubles and disturbances. Be it the Arab Spring or militant insurgency, the overall atmosphere in most countries of the region has been turbulent, to say the least.

However, right next to these countries, the Gulf states, in spite of all their internal and external problems, have enjoyed relative comfort. Partly due to the fact that the natives of Gulf tend to prefer political stability over chaos, and partly on account of the cash reserves that oil and hydrocarbons keep generating, the Gulf states have, by and large, kept insurgency and instability away from their respective territories.

Yet, this does not imply that life is a bed of roses for the Gulf Cooperation Council (GCC). In fact, of late, the GCC has been doing its share of research and brainstorming over security and diplomacy issues. As of now, the security calculations of Gulf countries are being radically shaken.

By now, member-states of GCC have realized that USA, thus far their biggest ally, is nothing beyond a fair-weather friend. Furthermore, turmoil in states such as Egypt, Libya, and most importantly, Yemen and Bahrain, has compelled GCC countries like Saudi Arabia to reconsider traditional security tactics and implement a new policy for this purpose.

One cannot entirely blame the Gulf states for this—Iranian influence is ever on the rise, and the sectarian divide in countries such as Syria and Bahrain is genuinely testing the collective resolve and intent of GCC.

However, whilst the GCC is now aware of the need of new security measures, it is still largely clueless about which measure to take and how to implement them. Saudi Arabia and its allies have realized that factors such as ISIS, Iranian dominance, the Assad regime in Syria are all the part of the problem and need to be addressed at the earliest, but the solutions are yet to be discovered. Western intervention, for example, is hardly a solution.

Plus, the ongoing issues in Yemen have added another dimension to the entire problem because GCC’s southern neighbor is undergoing strife that is both political and sectarian in nature. Add to it the fact that Bahrain is also witnessing dissent in its ranks, and the GCC has a lot to worry about.

The Case of Yemen

Yemen has seen its share of issues in the past, but the recent illegitimate coup mastered by the Houthi rebels has torn the country in two parts. The Gulf Cooperation Council is aware of the threat posed by the Houthi rebels, and as such, when Yemen’s President Mansour Hadi was forced to flee to Aden, the Gulf states, too, decided to move their diplomatic missions to Aden itself, thereby sending a direct message to the rebels that GCC does not approve of their militancy and violence.

Saudi Arabia had already undertaken measures to construct security barriers in its provinces of Najran and Jizan. Yet, all said and done, Yemen cannot be isolated or detached from GCC. Now that Riyadh has a new monarch, the manner in which the Kingdom of Saudi Arabia will respond to the crisis in Yemen will decide the route the GCC might opt for.

The military budget of Gulf states reaches tens of billions per annum. As such, the GCC Peninsula Shield Force might seem to be a viable option for intervention in Yemen. However, it must be noted that Saudi Arabia, UAE and Bahrain are actively contributing to the international coalition against the Islamic State and as such, neither of them seem to be in a position to undertake an extra expedition, be it in Yemen or Syria.

At the end of it all, this is perfect moment for the Gulf Cooperation Council to get its act together. If the member-states of GCC can put in place a feasible and operative security strategy, they can easily ward off unwanted Western intervention and simultaneously ensure the stability of an otherwise troubled neighborhood.

With the Houthi terrorists eager to establish their control in the southern part of the region, the GCC needs to be cautious and focus on actual implementation of security tactics.

Funds and hydrocarbons cannot purchase peace and stability. Therefore, time has come for less words and more actions on part of the Gulf Cooperation Council.