Netanyahu’s Speech to Congress: The Day After 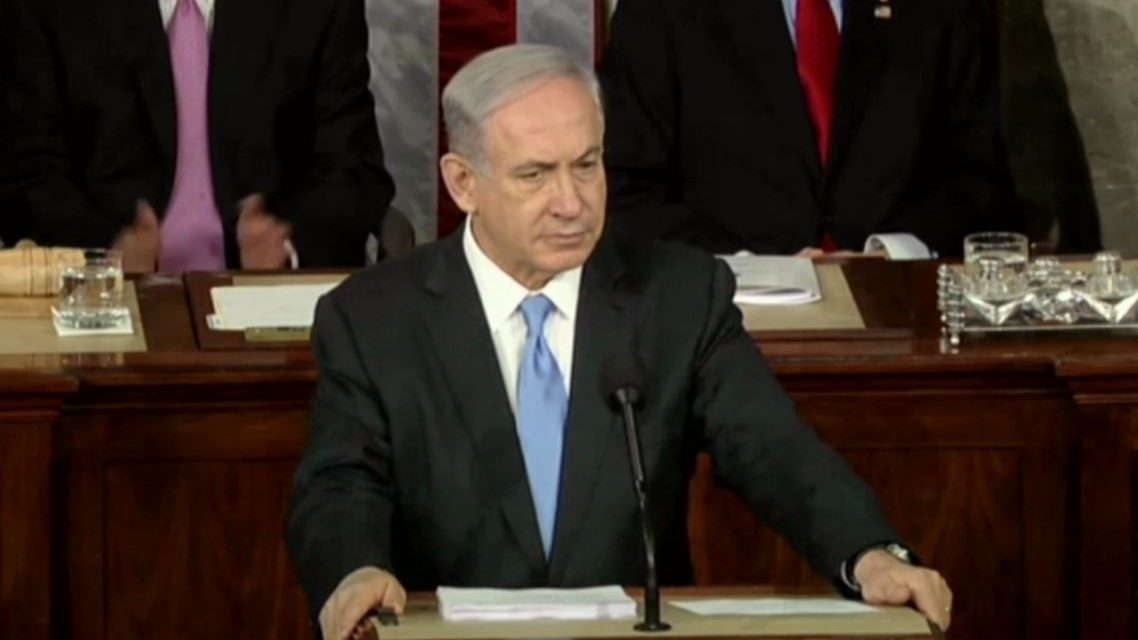 Israeli Prime Minister Benjamin Netanyahu speaks to the US Congress at the Capitol in Washington, DC, March 3, 2015.

One cost of Netanyahu speech to Congress is the distraction from the intolerable realities so long endured by Palestinians living under occupation.

My reaction to Netanyahu’s theatrical performance yesterday in Congress led me to recall that the deepest thinkers turned against democracy in ancient Greece because of the susceptibility of the Athenian citizenry to demagogic oratory from opportunistic politicians. Plato, Aristotle, Thucydides all became sensitive to the degree to which the rhetoric of demagogues contributed to the decline, and eventual downfall, of ancient Athens. Yet even in the worst last days of Athens, the demagogues who performed so destructively were at least homegrown!

It would have been inconceivable anywhere other than the United States for a controversial foreign leader to be welcomed before the legislative chamber to attack ongoing delicate diplomacy of the elected head of state.

It is not merely a matter of the niceties of protocol as to whether the Speaker of the House was delinquent in not coordinating the invitation with the White House so as to agree on a date not so embarrassingly tied to Netanyahu’s bid for reelection on March 17, although such issues are not trivial.

More substantial, however, is what it tells us about this self-destructive embrace of a foreign leader that is unabashedly seeking to derail a critical foreign policy initiative clearly in the interest of the United States, the Middle East, and the world, and even Israel (although presumably not Netanyahu’s and Likud’s worldview).

Such concerns about the vulnerabilities of democracy also underpinned the republican ethos of James Madison and other architects of the U.S. Constitution that explain why America’s founders opted for a republic rather than a democracy. They sought to rein in ‘the tyranny of the majority’ by a series of measures that willingly sacrificed efficiency for restraint.

Such republican sentiments have been trashed in recent years, especially by Republicans who have been particularly willing to give the President essentially unlimited discretion to wage war while foregoing the specifics of authorization and the requirements of a ‘declaration of war.’ In fairness, the Democrats are not without blame for this constitutional complacency, which is suggestive of the insidious effects of compulsive bipartisanship in recent American foreign policy, and nowhere more insidiously than in relation to Israel.

Stripped of its Baroque flourishes, what Netanyahu was telling Congress is that it should be sure to impose such unreasonably strict requirements on any future deal with respect to Iran’s nuclear program as to make the proposed arrangement non-negotiable.

As it is, what Obama seems to be demanding of the Iranians a set of assurances that extend far beyond what has been ever expected of any other non-nuclear state despite several others (including Germany and Japan) edging up against the nuclear weapons threshold. These impositions on Iran’s nuclear program include restrictions on enriching capabilities, removals of existing stockpiles of enriched uranium, and a program of periodic rigorous inspections, scheduled and unannounced.

There already exists an unreflective consensus in the United States that any effort by Iran to cross the nuclear threshold would provide ample justification for launching an aggressive war against Iran. The liberal center of the current American political debate, dominated by soft Zionism, seems mindless or clueless about why such a posture is so unjustified. It never makes mention of the litany of unlawful military threats made by the United States, and even more so by Israel over the years, directed at Iran.

Most do not realize that threatening a non-defensive military attack is as unlawful as is an actual use of force (the UN Charter uses the language of ‘threat or use of force,’ making no legal distinctions).

This threat diplomacy has been reinforced by a variety of covert interventions disregarding Iran’s rights as a sovereign state, including the assassination of nuclear scientists in Iran and cyber warfare waged against its nuclear program. (In 2010 it became clear that the United States and Israel has jointly develop a computer worm known at Stuxnet that was being used to destroy Iranian centrifuge capabilities at their Natanz and maybe elsewhere.)

Against such a background, Iran’s willingness to negotiate in light of this background, not to mention its willingness to overlook Israel’s retention of a nuclear weapons monopoly in the region, can only be understood in relation to the hardship imposed on the country by the sanctions regime and the drastic fall in world price of oil.

Additionally, the leadership of the Iranian government seems inclined to establish more normal relations with the United States and the West after decades of confrontation.

Against this background, we can begin to appreciate how deeply irresponsible it was for Netanyahu to be given this Congressional platform from which to deliver his fear-mongering speech that quite obviously had one overriding purpose and effect—to defeat, or at least deeply complicate, the already complicated diplomacy of reaching an agreement with Iran acceptable to both sides.

Its secondary motives, equally obvious, was to help Netanyahu win electoral approval in Israel and to show the American people that for the sake of Israel, they are far better off in the future with a Republican in the White House.

If this gloomy assessment is correct, it will almost certainly lead in two main directions: giving the hardliners the upper hand, who have contended all along that an encounter with the West is inevitable and in accord with Islamic destiny.

In effect, a collision course culminating in war would appear increasingly inevitable. And such a collision would have devastating effects in the region, including a substantial risk of a far wider regional war. It would also take a huge step in the direction of making the Huntington prophesy of ‘a clash of civilizations’ a tragic reality.

For a global state such as the United States, the pursuit of national interests is often destructive of the interests of others, but given that the alternative here is the adoption of the Netanyahu’s prescriptions, it should be a no brainer that the Obama approach is to be greatly preferred. As argued, even Obama is being far too deferential to Israel’s view of Iran, but at least it is far less destructive of national and human interests than where Netanyahu’s path leads.

This is one situation in which ‘leading from behind’ (that is, following Israel) will not do. The world needs a responsible United States Government on the global stage, but this can only happen if the umbilical cord tying the country to Israel is cut, and this will only become feasible when many more of the American people awaken to their own interests and the betrayal of their most cherished values.

A final observation: we should not forget while this dark Netanyahu melodrama unfolds, the ordeal of the Palestinian people is completely ignored except by the Palestinians and by activist supporters around the world.

Quite relevantly, the supposedly moderate Israeli opposition to Netanyahu has also kept mum about what they might do to bring about a just peace, apparently being either content with the status quo or fearing than any talk of making peace would alienate even anti-Netanyahu voters.

In effect, one more cost of the Netanyahu visit is to preclude any mainstream attention given to the intolerable realities so long endured by Palestinians living under occupation and in refugee camps.